“It was fun, but I didn’t want to be doing this forever.”
Albert Bruan, Security & Driver (RV)

Day 10 on the Road to BIO was an especially challenging one. This makes sense; it was, after all, the perfect storm for a collective breakdown. Brutal desert heat, an inevitably exhausted and malnourished crew, and a lack of adequate fuel in rural Texas were all contributory factors. But in each retelling of this day that would unofficially mark the start of the journey’s final stretch, one factor seemed to amplify the strife. Albert Bruan was departing.

“We were really tight by then, and he’s a very self-sacrificing person,” said Steve.

Another challenge that would prove to be especially taxing was the 600 miles of ground the crew needed to cover in order to make it to their next sponsor visit in Tucson, Arizona first thing the following morning. As tensions grew high under an intensifying Texas sun and inhibitions began to dissolve as rapidly as a desert mirage, they would get there because they had to—but not without some tension, and not without a few strange encounters along the way.

Stop one on day 10 was El Paso International Airport, a three-and-a-half-hour drive from Fort Stockton, where Albert would be bid farewell and another Road to BIO team member would be collected. Understandably, the crew was sad to see Albert go, as he was key in quite literally driving the journey forward. Govindra, among others, attempted to dissuade him from leaving. But there was no way Albert was missing that flight.

“I said, ‘Hey, Albert, it’s okay if you miss your flight—you get to spend another day with us,’” Govindra recalled. “He said, ‘I’m not missing that flight for anything.’”

The last of the 93-octane fuel the crew had stocked up on back in Charleston, South Carolina had by now dried up and, despite calls to six gas stations, there was none to be found within the 600-mile radius the crew would traverse that day. Recalling warnings from various service personnel not to fill the Aventador with anything but 93-octane, Nigel cringed as he topped it off with 91, the only option from here on out.

“There was a moment of panic,” he admitted.

But all seemed okay as the car was tested on the 50-mile stretch to the airport. Albert, sailing smoothly in the RV thanks to the copious amounts of diesel available on a route heavily traversed by tractor-trailers and Chevy Silverados, still managed to arrive at the airport later than the Lamborghini for a farewell that was bittersweet for all.

“I was glad to be going,” said Albert. “I had fun, but I didn’t want to be doing this forever. I’ve been stationed in Kuwait and the Philippines, but there, for some reason, I just wanted to get out.” 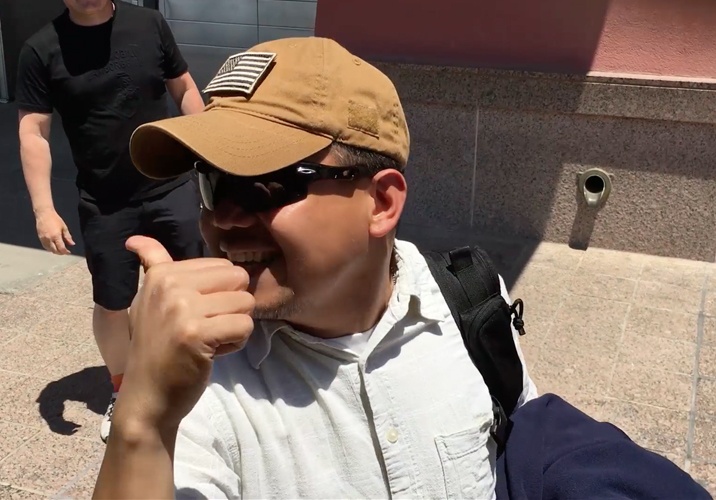 Feeling especially bittersweet was Steve. Sure, he was going to miss Albert, whom he described as an incredibly self-sacrificing presence on the Road to BIO, but if his farewell seemed a touch maudlin for what the situation warranted, there may have been other factors at play. 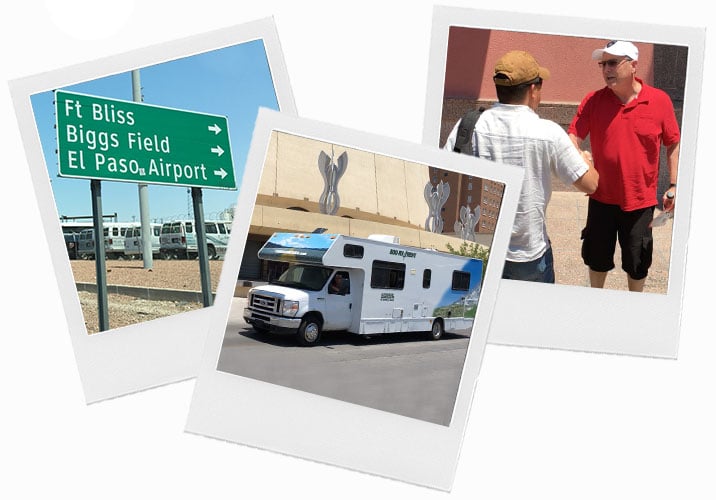 “Not to dwell, but we couldn’t cool the RV, and we were heading into 115-degree heat,” said Steve. “In a way, Albert was getting out when the getting was good.”

But it wasn’t just the heat that would prove trying for the usually upbeat correspondent who, until this point, had settled in as an exclusively backseat driver. Turns out, navigating a 30-foot RV isn’t as easy as it seems.

“To eat some of my words,” started Steve, “when I started taking over some of the driving duties, I wasn’t perfect. The GPS—you stop to do something and intend to get back on your route, then get stuck. And the fatigue of the road…”

While the crew lamented the loss of one warrior and readjusted to their new roles warranted by the change in dynamic, a new member touched down as Albert took off—Haig Armaghanian, CEO of Haig Barrett, a consulting partner of That’s Nice. And while Haig was a most welcome presence on the journey, by day 10 of 12, he was mostly just along for the ride.

“Welcome Haig, who was hungry and looking for a meal,” said Nigel.

Haig was hungry and Steve was starving, as evidenced by their collective grumbling, both verbal and abdominal.

“Steve was sulking under a tree,” said Nigel.

With the exception of the newcomer, the line between lucidity and insanity seemed to be thinning, as the notion of heat-induced psychosis began to make its way into conversation, particularly among those observing the incoming footage back at the office. A drone shot of Brian and Eugene dancing the pasodoble was of particular concern—not so much for concerns of mental wellbeing, but because it started to sway the office betting pool on who would be first to break. But their next encounter during a food stop in Deming, New Mexico had it swinging back in the opposite direction. 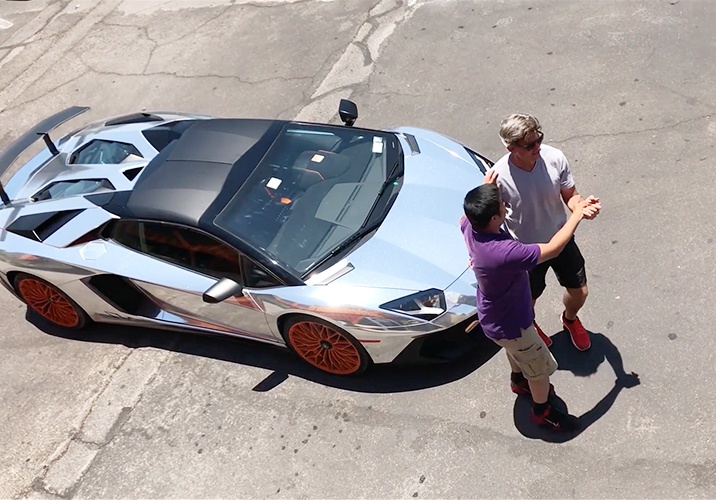 “Steve bought some dubious perfume from a very sketchy local, out of the back of a truck,” Nigel disclosed.

As the bellyaching subsided after a down-home meal, hunger was temporarily off the table as an excuse for delirium. So Nigel’s idea to take the Lamborghini off-road in the Arizona desert—and with it, the RV—could maybe be attributed to the heat, but was more likely just a result of his thrill-seeking disposition.

“Heading off the highway and into the mountain roads we found a dirt track that looked promising,” recalled Nigel. “Jackpot—we were in six inches of soft sand.”

But six inches in the desert is nothing, as they would learn later that day in pursuit of a perfect Arizona sunset. As Nigel and Steve joined up with the RV, they found themselves surrounded on both sides by 12-inch dunes, pushing through the deep sand, dust and snakes as far as they could for a view that was, well, sort of worth the struggle.

“We launched the drone, which was the only one to see the sunset,” said Nigel. “Then it was back on the road to Tucson to clean the car once again before heading off to bed.” 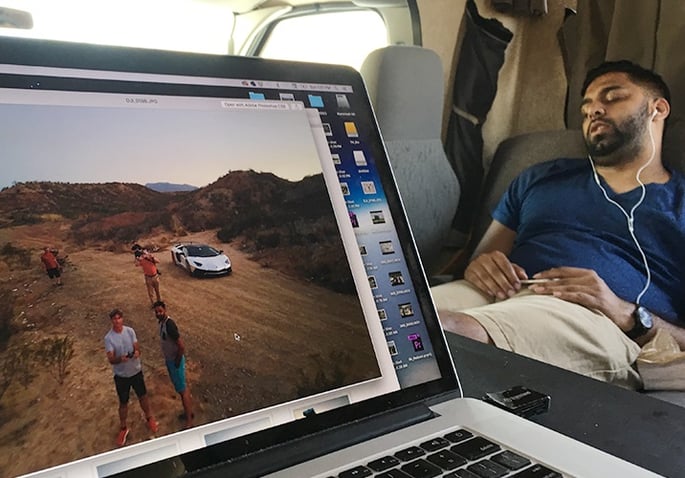 With a 4 a.m. wakeup call the next morning for an interview with early drug discovery partner Icagen, cleaning the car this evening was necessary, though no one had given it a thought other than the person who led the convoy off-road in the first place. And it seems that same person forgot to mention it on the way to the hotel, where they finally arrived around 11 p.m. after an extended encounter with a parrot named Bobby at a gas station a few miles back.

“There was tension,” admitted Steve. “But we worked through it.”

Besides the tumultuous five-interview day two on the Road to BIO, this late-night effort was perhaps the greatest example of the team coming together to get the job done. Tired, hungry and with a lack of resources to properly wash the vehicle, everyone had to dig deep to accomplish this mission. Brian, usually behind the scenes, rolled up his sleeves to help while Haig took over the capture duties. 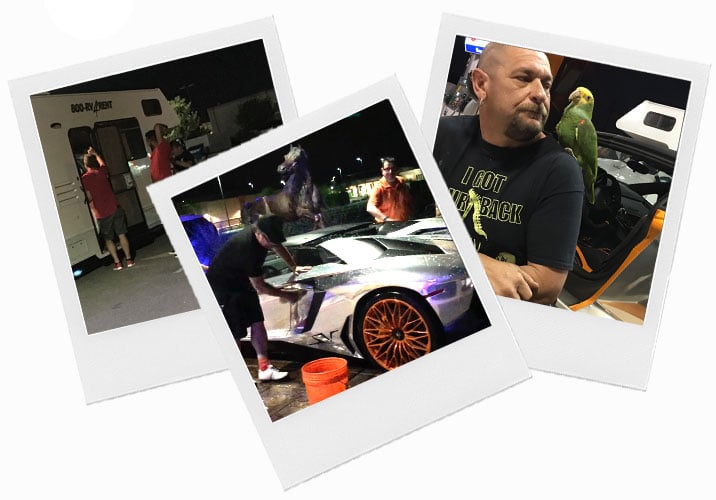 “Everyone brought down ice buckets from their rooms to wash the Lamborghini,” said Brian, recalling the moment they realized there was no hose on the property. “That’s when our ingenuity kicked in and we all grabbed garbage cans and got permission to go into the kitchen in the lobby level and fill up.”

Though tedious, they did get the job done. And as Steve was happy to report, the car was cleaner than ever.

“Then we had our long-awaited dinner,” he said. “A chimichanga from the refrigerator in the hotel.”

NEXT | Chapter 11: BIO On The Horizon