“Just in case I don’t come back, it was nice knowing you.”
Albert Bruan, Security & Driver (RV)

Albert Bruan made his rounds before leaving the New York City office, stopping by the desks of those remaining at home base with a handshake and “just in case” farewell. He was off to New Jersey where a 30-foot RV sat in a lot among its own, soon to be the last time it would be seen without its much sleeker counterpart until San Diego. After receiving a thorough briefing on how all the systems worked, Albert took the wheel, unbeknownst to him that he was assuming his permanent position on the Road to BIO.

As Albert headed toward Boston where the journey would officially kick off the following morning, a gaggle of That’s Nice employees stood outside the agency’s Fifth Avenue headquarters eagerly awaiting Nigel’s arrival with the never-before-seen, freshly wrapped Lamborghini. It was one of those crisp mornings that New Yorkers should come to expect in early June, but that still frustrates those who have been lying in wait for warmer temperatures, seemingly since before they can remember. With the promise that Nigel was just around the bend, the team left their sweaters and jackets upstairs, and huddled around waiting for a glimmer of silver to emerge from the morning gridlock. 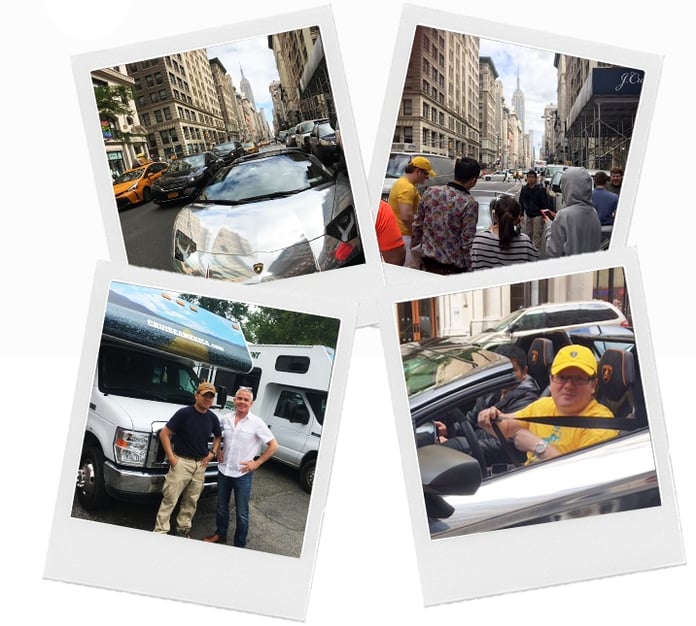 Nigel’s arrival was announced by a commotion of horns and hollers before the car could even be seen, an exaggerated foreshadowing of things to come on the Road to BIO. Once in front of the building, a distracted Nigel loaded up the last of what he could fit in the two-seater as the That’s Nice team, several passersby and a series of sightseeing tour bus riders took the form of paparazzi. All packed up and ready to go, Nigel and Eugene lowered themselves into the Aventador’s unforgiving seats, bidding farewell as the butterfly doors came down and life before the Road to BIO came to a close. Their first stop, not 10 miles from the office—The Met Cloisters in upper Manhattan, overlooking the Hudson River. 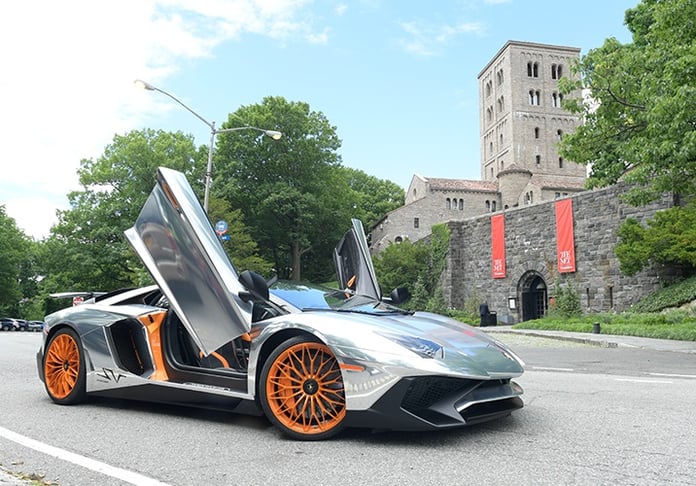 With Eugene as his copilot, the two discussed the road that lay before them as they headed north. For Eugene, it wasn’t just his first time being one on one with the boss for an extended period of time—it was also his first time in the confines of a Lamborghini’s rigid racing seats.

“The trip from New York to Boston was fun,” recalled Eugene. “We took some nice pictures. But was it comfortable? After two hours, it was not good.”

With Nigel and Eugene traversing the scenic route to Massachusetts, Brian Pierce and Steve Kuehn were scheduled to land at JFK Airport mid-afternoon. Wei Gao was tasked with the airport pickup in Nigel’s other car, an SUV, and was met upon arrival with pretty much what he expected—an outwardly enthusiastic Steve and a quieter but equally motivated Brian.

“I was thinking to myself, these guys have no idea what they just got themselves into,” said Wei.

Just over the Connecticut state line on the way to Boston, it started to sink in that, despite the confidence and enthusiasm they exuded, everyone in the SUV had some trepidations about the forthcoming endeavor. Steve, described by both himself and his peers as “overwhelmingly positive,” contemplated the road ahead with mild apprehension, but the utmost faith in his team.

“My confidence was a little shaky,” admitted Steve. “But I had the ultimate confidence in Brian, and Wei is like a general in command. We were off to a good start.”

Brian, an ever-stoic presence at That’s Nice, was focused intently on the execution of the journey from a logistics standpoint, and on the quality of the product he would be delivering. But with Wei at the wheel, his anxieties were put to rest.

“It was great to have Wei the first couple of days,” said Brian. “As a manager of teams, he’s just fantastic.”

Nigel and Eugene, as they should have been, were the first to accelerate into the Greater Boston area of Massachusetts, the campaign’s inaugural region and ultimate representation of the Road to BIO. Cambridge, a city that has been ripe with industry since its pivotal role in 17th century American history, has progressively evolved into the biotechnology hub it is today, with the formation of the city’s two major research universities serving as contributory factors. The Massachusetts Biotechnology Council (MassBio), which for 30 years has provided services and support for some of the world’s leading life sciences organizations, today represents over 975 biotech organizations in Massachusetts and beyond.

Cambridge-based Brammer Bio, a new cell-and-gene-therapy-focused CDMO, is one of these organizations, appropriately serving as the preamble to a bio-fueled 12 days on the road. After receiving a warm invitation from Steve Kasok, co-founder and Chief Financial Officer of Brammer Bio, Nigel pulled into the organization’s newly acquired, former Biogen facility for a “proud and prosperous” tour of the organization’s new headquarters. After the tour, the Brammer team came out in droves to see the newly-wrapped 750-horsepower Aventador.

“Science and horsepower,” Nigel thought to himself. “The journey begins.”

At dinner thereafter, Steve from Brammer described the organization’s focus on cell and gene therapy, which was supported by its acquisition of a viral vectors manufacturing facility in Alachua, Florida – and the subsequent acquisition in Massachusetts.

“It was like talking to a proud parent of a newborn child,” Nigel recalled. “It is clear that Brammer is on the edge of something remarkable.”

Each the epitome of luxury in its own respect, the Lamborghini and RV met in the parking lot of a hotel on the outskirts of downtown Boston where the crew would be spending their first evening on the Road to BIO. Moving a 30-foot RV around a small car park is no easy feat, but if anyone was up for the challenge, it was the Bruan Identity himself. Like a pro, Albert parked the RV alongside the Lamborghini, and Wei in the SUV sandwiched it in from the other side. The goal on that first night—and every night thereafter—would be to keep the car hidden at night, saving its luster for the daily unveiling. 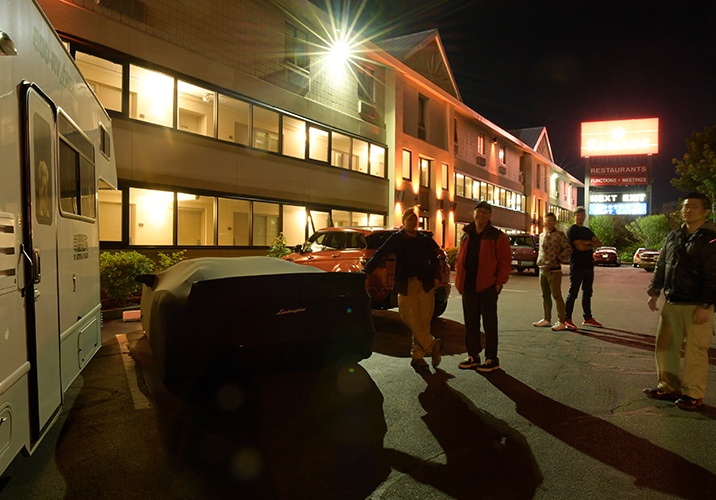 Admittedly not the epitome of luxury was the hotel, situated across from a late-night bowling alley that would generate some questionable activity later that evening. But in typical form, the team took it in stride.

“With Nigel not having oversight of every little detail, the hotel was kind of sketchy,” admitted Steve, Road to BIO reporter. “But the crew was all there, and it wasn’t like it was some huge deal. We had our schedule, and the big mission was starting.”

As the team settled in and worked to prepare for the evening and days ahead, a noticeable sense of uncertainty started to permeate the group. As Nigel astutely pointed out, the team hadn’t yet settled into its respective roles, which made the first evening one of the most difficult.

“The first night in Massachusetts was the hardest leg of the journey because we didn’t know what our established roles were,” he said. “Leadership was expected from me, which I’m comfortable with in the office, but outside of the office I feel it’s more of a collaborative delivery.”

Nigel wasn’t the only one who felt the dynamic was a bit off. As Albert and Eugene worked out the evening watch schedule, Albert had to explain that neither of them would be standing outside to watch the Lamborghini as Eugene had assumed, but that they would be doing so from the comfort of the RV.

“There was a feeling of uncertainty,” admitted Albert. “This was the first time all of us would be working together as a team. We’d been to trade shows before, but those rules are totally different—there, we stick with what we do.”

After witnessing a parking lot drug deal with some characters from the neighboring bowling alley, the Road to BIO was put to bed, much later than it should have been for what was to be a 5 a.m. start the following morning. As the team settled in, Nigel placed his faith in Eugene, hoping both he and the Lamborghini would be there at daybreak.

“Boston was a little dangerous, staying right near the freeway,” Eugene recalled.

NEXT | Chapter 1: Pioneers In Early Discovery

Bristol Is A Good Place To Live