Bio On The Horizon

“What an effective leader—a combination of Yoda and Harry Truman.”
Steve Kuehn, Reporter

The Road to BIO was promised two things from Tucson, Arizona: a breathtaking sunrise and awe-inspiring innovation. A pre-dawn wakeup call and upcoming interview with early drug discovery partner Icagen ensured neither would be missed on this penultimate day of the journey.

Setting up shop at Icagen’s Tucson Innovation Center, a former Sanofi drug discovery site, it was Road to BIO newcomer Haig Armaghanian who first took the mic for a discussion on management changes in the corporate environment. Once wrapped, Haig would head to the airport to complete his final leg of the journey and join the awaiting welcoming committee in San Diego.

For an organization typically involved in the earliest stages of discovery to appear in the end stages of theirs could only mean one thing for those on the Road to BIO. That the painstaking effort put into the project from the start is what enabled them to come this far. Ken Wertman, Ph.D., Senior Vice President of Icagen, was a long-awaited presence on the journey, praised for his scientific expertise and Icagen’s progress in advancing early drug discovery through groundbreaking innovation.

“When we met Ken Wertman from Icagen in Arizona, we were in awe of what they’re doing for medicine,” said Nigel. “They’re very early—from target to lead—which shows it’s not always about the big blockbusters.”

Icagen is unique in its position on the development pathway, working with customers in the very earliest stages of drug discovery to accelerate the identification of high-quality drug candidates through advanced computation and process automation. In Tucson, Icagen’s multidisciplinary scientists work in close proximity to advance early drug discovery campaigns, leveraging the organization’s vast institutional knowledge to properly “set the cycle.”

“It’s essentially the clock speed of research,” explained Ken. “Putting everyone together into one team really accelerates the process and reduces white space in programs, which reduces the chances of missing ‘aha’ moments that occur between the disciplines.”

Icagen’s commitment to fully integrated drug discovery extends beyond that of its multidisciplinary personnel to also include complementary capabilities across facilities. In North Carolina, Icagen’s scientists work in the pharmacology and physiology of ion channels, which Ken described as one of the most challenging areas in modern biology. And at the Tucson facility, historically a fully integrated drug discovery site, Icagen staff performs a synthesis of chemistry, biology and computation.

“Icagen can now offer clients everything needed from planning to building and executing discovery campaigns, from concept to candidate,” said Ken. “As a result, we’re morphing the Icagen business plan today, which was primarily fee for service, into a model that now incorporates joint ventures and risk shared programs, basically from concept to candidate across therapeutic areas or target classes.”

The spirit of the group when Brian declared the interview a wrap could only be described as jubilation. Not only were they on the heels of their last commitment on the road, but Ken’s insight into the intricacies of both science and industry encapsulated what this journey was all about—and for some, was a reminder of why they started down this path in the first place.

“Ken is an amazing person,” lauded Steve. “This was a big lure to how my job and career transformed. I thought I was going to be a lifestyle reporter for a newspaper, and now, I get to meet these incredible leaders.” 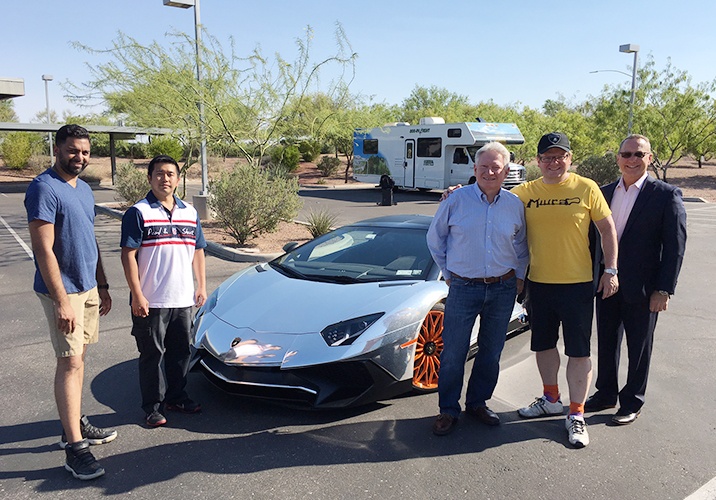 Turns out, when he’s not leading the fight in discovering new therapeutics for patients in need or confirming the career choices of Road to BIO journalists, Ken is a motorcycle enthusiast who, to Nigel’s delight, more than appreciates the refinement of a V-12 engine. A quick spin around the local roads then a cloud of dust, as the Road to BIO was headed to San Diego—or bust.

han the topographic landscapes they had traversed back in Virginia on the way to Tennessee, this transition from Arizona into California was, for Nigel, the most impressive shift in landscape he had seen from northeast to southwest. 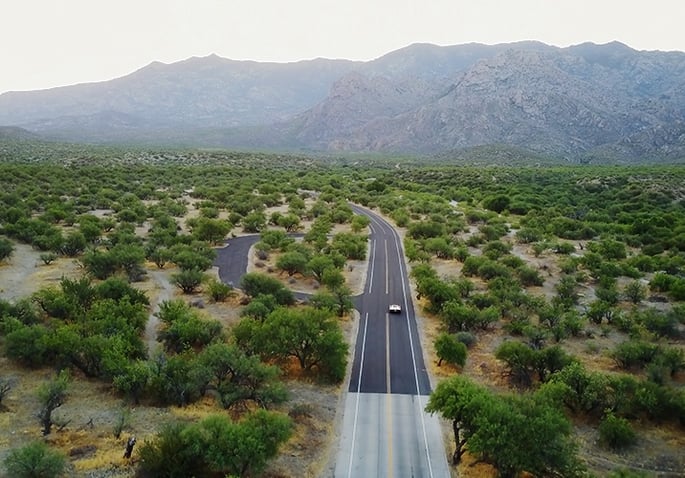 “Going into southern California from Arizona, there was so little foliage, so little greenery,” he remarked. “There were seemingly hand-placed rocks as we made our way toward San Diego. It was the most visually exciting part of the journey.” 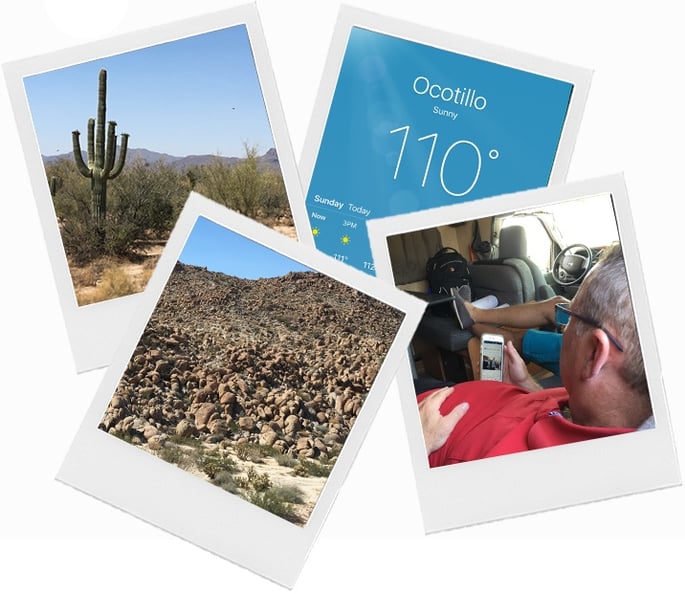 It was five hours from Tucson to their resting place of Carlsbad, California, and while accelerating toward the long-awaited oasis of a seaside resort town was of great temptation—particularly for water-loving Steve—there were two more must-stops on the Road to BIO. First was the Ocotillo Trading Post in the southern California desert town of Ocotillo for a photo-op and, unexpectedly, a quick run-in with the law.

Navigating the different regulatory restrictions on the journey thus far had proven to be a success. With the exception of Albert’s late-night warning back in Georgia, the crew had gotten off scot-free. But riding so close to the Mexican border in California’s Imperial Valley, there was a new regulatory agency they hadn’t yet encountered—the El Centro Sector of the United States Border Patrol. Though proof of residency was a non-issue, those back at the office feared the crew’s delirium-induced antics may raise some flags. But this was yet another friendly exchange on the Road to BIO, representative of both national and international relations, of safety and service.

Bidding the officers farewell, Nigel decided to test the limits once more before concluding the traveling portion of the journey, hoping to also expel some of the stress that had built up over the last 11 days. In 114-degree heat, he led the others in what could only be interpreted as a slapstick hybrid between the TV shows, Top Gear and Benny Hill.

“We were two hours outside of San Diego, but were having so much fun I’m not sure anyone was interested in leaving.”

It’s hard to say whether everyone would agree with Nigel’s assertion, but by this point, they were all in a euphoric state. Tumbling over what Nigel described as “moon-like” topographic landscapes, the crew made the final push into San Diego. Civilization, at last.

“It was almost an arrival of the Caravan Train coming out of the desert into population again,” said Nigel.” The temperature dropped 40 degrees as we hit San Diego and moved up the coast to Carlsbad, our end-of-day destination.”