Additive manufacturing — or 3D printing — is now being leveraged for commercial applications in a number of industries. Many within the pharmaceutical sector are beginning to realize the potential benefits that this new production technology could have for drug developers and patients alike. The first steps are being taken to transfer 3D printing technologies into pharmaceutical manufacturing.

The Promise of 3D Printing in Pharma

While the production of drugs might not be top of mind when considering applications for additive manufacturing (or 3D printing), there are a number of significant benefits driving its inevitable widespread adoption. The most persuasive is the movement toward more personalized medicine and targeted therapies as biomonitoring and diagnostic tools continue to improve.

We already know that different doses may be required for different patients depending on their age, weight, gender, and other factors. Co-indications can also require adaptive dosing, and genetic differences in terms of things like drug metabolism make uniquely targeted dosing ideal. In addition, drugs are being developed to target patients with specific genetic sequences rather than macro-level disease. The identification and use of biomarkers are rapidly evolving and helping to more closely define the required dose for a specific individual.

Current manufacturing methods involve mass production of tablets, and the industry is still at the stage where patients receive standardized doses of medications. That approach does not fit with the notion of individualized treatment. The precision enabled by additive manufacturing would make it possible to produce a drug with an exact dosage tailored to a specific patient’s needs.

Furthermore, 3D printing makes it possible to not only individualize the dose but vary the targeted quantity of drug substance to adjust the dose as patient needs change. The release kinetics can also be modified in a short timeframe using 3D printing, something that is simply not possible under the existing manufacturing paradigm.

The ability to make rapid changes creates further application opportunities for 3D printing in the early phases of drug development. In early clinical trials, for instance, dose-escalating studies are commonly performed to determine the optimum target dose. For these dosing studies, access to formulated products with different and assured API loadings is critical for success. 3D printing is an ideal solution from an industrial perspective, allowing rapid prototyping and fast product development.

Several different technologies have been developed to enable 3D printing on a commercial scale. Powder-based technologies include drop-on-powder, binder jetting, and selective laser sintering. In powder binder jetting, a 3D structure is built from the powder bed using a sprayed-on binder. Selective laser sintering uses a laser source to induce thermal energy that can sinter defined parts of the powder to generate a 3D structure layer by layer.

Liquid-based technologies include drop-on-drop deposition and stereolithography. In these cases, polymerization is induced, typically by applying UV radiation, to create 3D forms from the liquid raw materials. The fact that polymerization usually occurs via a radical mechanism can be problematic for certain APIs, such as drug substances that are sensitive to oxidation.

Melt-based technologies have attracted a high level of interest in the pharma industry because the upfront investment is fairly low and these technologies can leverage existing extrusion technology that is already widely employed. Fused deposition modeling (FDM) systems are fairly cost-effective and can use premanufactured, drug-loaded filaments as the raw material. While they have not yet been comprehensively adapted for pharma production, several research groups are exploring the generation of filaments via hot-melt extrusion (HME). Pressure-assisted syringe systems are also being investigated for semisolid forms.

In the pharmaceutical industry, there is already extensive knowledge and experience with the HME process. As a result, the process for the creation of filaments has already been well studied, and we know how to create a homogenous distribution within the system. Process analytical technologies (PATs) have also been developed for this continuous process that allow inline monitoring of the API content and API distribution within the filaments. We can leverage the polymer science and monitoring tools to build effective processes for the creation of filaments specifically designed for use in 3D tablet printing.

HME is currently important for the production of amorphous solid dispersions that enhance the solubility of poorly soluble APIs. In this case, crystalline APIs are transferred into amorphous forms and then embedded within a polymer matrix to yield a well-distributed product with greater solubility.

Producing filaments for 3D printing is a downstream process following HME. Typically, the material produced using HME takes the form of granules that are then compressed into tablets or pellets that are filled into capsules. Those approaches are, however, mass manufacturing solutions.

In this case, filaments containing specific API loadings and/or excipient contents are created using a twin screw extruder in a continuous process. The diameter of the filament is controlled by adjusting the speed of the conveyor belt. As it is generated, the filament can be cut to predetermined lengths or even wound up for later use.

When these filaments are used in the 3D printing of drug products via FDM, however, the production of personalized medications becomes possible. The release kinetics can be varied, for example, by adjusting the infill volume, the surface volume, or the tablet geometry. This approach provides even more freedom when designing complex release forms.

At MilliporeSigma, our SAFC® API R&D team has found that it is possible to add a 3D laser measurement as a means for online process control. Continuous monitoring of the filament geometry using optical laser scanning technology integrated into the manufacturing process was observed to further improve the homogeneity of the generated filaments, which has a direct impact on dosing during 3D printing. The addition of a melt pump for extrusion was also determined to minimize variation of the API distribution.

For filament production, a premix of the drug substance and target polymer is formed and fed through a twin screw extruder to combine the API with the polymer. A polymer melt is then generated via heating and passed through the nozzle of the extruder, which determines the geometry of the filament that is produced. The standard diameter for most 3D printers is 1.75 millimeters.

The nozzle, therefore, is typically 2 millimeters in diameter, and the diameter of the final filament is adjusted using the speed of the conveyor belt. The 3-axis optical laser scanning device is installed at this point to closely monitor the filament geometry.

Since the first part of the process is an HME process, the requirements for the polymer are often similar to those used in HME processes for the production of amorphous solid dispersions. However, for 3D printing, there are some additional important properties. The filament that is produced must have certain level of stability and flexibility. It cannot be too brittle, or failure due to breakage will occur.  It must also be sufficiently heat stable to survive a second heating during the 3D printing process. For instance, some natural-based polymers, particularly cellulose-based systems, are under certain conditions not well-suited for the additional melting step.

Melt drop deposition is a 3D printing technique employed in the plastics industry that we are exploring for pharmaceutical tablet production. This method is attractive because it enables direct use of powders or pellets as starting materials.

The pre-blend with the API is transported by a single screw to a compression area, where it is melted. The translational movement of the single screw generates high pressure at the nozzle, the opening and closing of which is controlled by a piezo actuator providing a very high frequency of up to 250 Hertz.

The individual droplets formed by the nozzle are deposited one by one. This approach enables even more freedom to design targeted dosage forms, because the porosity and other properties of the tablet structure can be carefully tailored. Varying the porosity, for instance, leads to variation in the surface area, which affects the drug release profile.

In addition, there is the possibility of using multiple nozzles during melt drop deposition, allowing the incorporation of multiple APIs in a single tablet. It is also possible to create tablets of multiple layers, with each layer containing a different API and polymer and having a different porosity and thus different release rate.

Indeed, this technology has tremendous potential and creates opportunities for designing completely new dosage forms and generating new drug-release concepts. One can imagine that patient acceptance will be much improved if dosage forms can be designed that reduce the number of required tablets or the frequency at which medicines must be taken.

Regulatory acceptance of 3D printing remains a critical issue that must be addressed. There is one 3D-printed product on the market already: Spritam (levetiracetam) from Aprecia Pharmaceuticals was approved by the U.S. Food and Drug Administration in August 2015 for the treatment of epilepsy. That approval gives hope that 3D printing technology will not only be further developed but also welcomed by regulatory authorities.

Many big pharma companies are investigating 3D printing and solving the challenges this new approach poses. In many cases, these companies have reached an impasse and are not able to achieve their target performance using established manufacturing technologies. Others are looking to speed up their development processes by leveraging the fast-prototyping capabilities provided by 3D printing.

The industry is currently at the stage where research activities and results need to be transferred to industrial applications. This movement has begun with Aprecia’s first marketed product and Triastek’s investigational new drug approval. There are various companies coming into the field and transferring in different types of technologies at the industrial level.

In the future, it seems likely that 3D printing, which is a digitalized manufacturing technology, will be combined with artificial intelligence and automated formulation tools. Currently, three-dimensional tablet structures are designed with graphics software, such as AutoCAD, which then is transferred to a slicer software that enables the 3D printer to construct the targeted geometry layer by layer. The highly digitized process will further evolve over the next decade to adapt these tools and enable their application for pharmaceutical drug production, but they offer great potential, including maybe even automated formulation development and optimization of formulations.

Initially, we expect 3D printing to be applied to small-volume products, but it is a scalable technology. It can be scaled out to further enable decentralized and on-demand manufacturing. It has, for example, been proposed to establish pharmaceutical production via 3D printing in mobile containers that can be shipped around the world, which presents a whole new perspective on production mobility.

Due to its simplicity, FDM will likely be the first technology deployed in pharmacies. It is easy to use and does not require any specialized equipment. More complex technologies, such as melt drop deposition, which does require complex equipment and skilled operators, might be more suited for use at distribution centers, where tablets could be produced and then delivered to pharmacies. Consequently, 3D printing has the potential to impact not only pharma manufacturing, but the pharma supply chain as well. 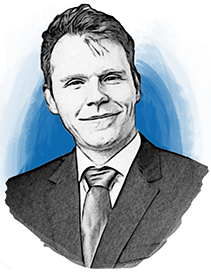 Dr. Thomas Kipping holds a Ph.D. in pharmaceutical technology and is currently the Head of Drug Carriers for MilliporeSigma. With a broad expertise in the field of amorphous solid dispersions, Dr. Kipping provides a deep understanding of formulation development and process optimization in the expanding field of hot melt extrusion. He has a strong background in pharmaceutical industry, including industrial development, GMP manufacturing, clinical supply, and research and development