Although migraines affect a significant portion of the population and can be debilitating, treatment options remain limited. Seurat Therapeutics is developing a patient-centric treatment that could be life changing for migraine suffers.

Migraine attacks affect approximately 1 billion people worldwide, including adults and children – almost 12% of the global population,1 and migraine is considered the 6th most disabling illness in the world. Most migraine sufferers experience attacks once or twice per month, but as many as 4 million people worldwide deal with chronic, daily migraine and have at least 15 migraines per month. Healthcare and lost productivity costs associated with the condition are estimated to be as high as $36 billion annually in the United States alone.

The current standard of care for acute treatment is one of four different triptan drugs, which are serotonin receptor agonists. However, patients must limit their usage of triptan treatments in order to avoid undesirable cardiovascular side effects. Dosing can also be difficult for patients that suffer from nausea and emesis as part of the prodrome of the migraine.

Antiseizure drugs and other medications have also been prescribed to migraine patients, but they too can have significant side effects. These drugs are also known to create a lethargic and “fuzzy” sensation after the migraine has passed. Botox (onabotulinumtoxinA) injections were approved by the U.S. Food and Drug Administration (FDA) in 2010 for the treatment of patients with 15 or more migraines per month. In 2018, the FDA approved three new monoclonal antibody drugs for migraine treatment. These drugs inhibit calcitonin gene-related peptide (CGRP) binding and have been shown to reduce the number of monthly migraine days, but must be administered via subcutaneous injection.

People that suffer from migraines exhibit neural hyperexcitability, which leads to spreading depression (SD) and oxidative stress. Replicating EE through a therapeutic approach has potential as both an acute treatment and prophylaxis for migraines.

Seurat Therapeutics is currently developing new treatments for migraines based on research performed at the University of Chicago Medical Center. This work, led by neurologist Dr. Richard Kraig, who is also Seurat’s co-founder and Chief Scientific Officer, demonstrated that environmental enrichment (EE), a naturally induced biological phenomenon associated with rich, stimulating environments, can reduce brain diseases by half, suggesting that therapeutics based on EE can improve brain health.

It is believed that people who suffer from migraines exhibit neural hyperexcitability, which can lead to neuroinflammation and oxidative stress. EE results in the overexpression and greater transport of insulin-like growth factor-1 (IGF-1), a protein produced by the liver, across the blood–brain barrier. In the brain, IGF-1 alters the action potential threshold of neurons, thereby reducing neural hypersensitivity. It also leads to decreased expression of CGRP. Replicating EE through a therapeutic approach has potential as both an acute treatment and prophylaxis for migraines.

Early studies demonstrate that our nasal delivery formulation halts the underlying cause of migraines in animal models.

During a migraine attack, abnormal electrophysiological signals lead to downstream effects, including neuroinflammation and blood vessel dilation, which then cause the sensation of pain. Current medications target these downstream effects. At Seurat, we are taking a more direct approach to treatment by developing a drug that interferes with the upstream production of abnormal neural activity. We believe this solution will be the first treatment to address the underlying cause of migraine headaches, rather than just the symptoms.

The drug in development is repurposing IGF-1. IGF-1 has been on the market and safely used to treat patients for decades; preclinical animal studies demonstrate that our nasal delivery formulation halts the underlying cause of migraines.2

Delivering our new medication in a nasal spray will make it easy for patients to self-administer anywhere. This delivery system could also allow for lower doses and avoidance of undesirable side effects.

To date, Seurat has raised over $1.4 million to support initial evaluation of our migraine candidate and is based out of the Polsky Exchange in Chicago, IL. We are currently at the preclinical stage and are performing dose ranging and toxicity studies. We hope to initiate clinical trials in approximately two years. 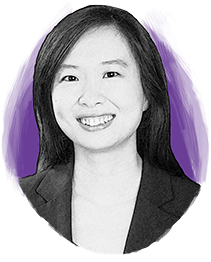 Yuan Zhang graduated from the University of Chicago as a Howard Hughes Medical Institute fellow in molecular pathogenesis & molecular medicine and translational sciences, respectively. In graduate school, she studied how the gut microbiota alters gut immunity and obesity. As a postdoctoral scholar, she examined how the gut microbiota alters radiotherapy responses in cancer models. Dr. Zhang was also a George Schultz Innovation Fund Associate, University of Chicago’s proof-of-concept fund, where she performed due diligence on the potential of various emerging technologies.