Despite an enormous ongoing focus within drug development on cancer therapeutics, many patients face limited treatment options. There is always a need for not only new therapeutic compounds but also new approaches and treatment paradigms. Karyopharm Therapeutics is taking a unique approach to cancer treatment by addressing a common mechanism of oncogenesis — dysregulation of nuclear export — by  targeting the export of specific proteins in cancer cell nuclei using selective inhibitor of nuclear export (SINE) technology. The company is actively developing first-in-class small molecule modulators of nuclear transport to treat patients with blood cancers and solid tumors. To discuss this novel approach and their therapeutic candidates, Richard Paulson, President and Chief Executive of Karyopharm Therapeutics, met with Pharma’s Almanac Editor in Chief David Alvaro.

David Alvaro (DA): Richard, can you give us a bit of an overview of Karyopharm Therapeutics and explain what makes the company unique?

Richard Paulson (RP): Karyopharm is really a very unique and innovation-focused company that has developed — quite frankly — a completely new way to attack cancer. We attack a foundation of cancer, in that all cancers inactivate tumor suppressor proteins, which can be thought of as guardian proteins fighting the formation of tumors. One way that they do this is by overproducing a chaperone protein called XPO1, which helps remove the tumor suppressor proteins from the nucleus, where they need to be to function. By targeting and inhibiting XPO1 with our drug selinexor, we can reactivate the tumor suppressor proteins. Our drug selinexor really has broad potential; we’ve proven activity across both solid tumor and hematological indications. This a completely new approach; we have the first and only nuclear export inhibitor.

Our founders — Michael Kauffman, M.D., Ph.D., and Sharon Shacham, Ph.D. — have been working on this for over a decade. The company was based on the foundational principles of the science: looking at proteins that, under normal circumstances, prevent the development of cancer. However, cancer cells are very good at exporting these proteins out of the nucleus and therefore inactivating them. So, what we do quite simply is block that export out of the nucleus, thus essentially reactivating the tumor suppressor proteins. This approach gives us the potential for broad activity. Very few drugs other than chemotherapy itself can actually treat both solid tumors and hematological cancers. We believe that selinexor and the next generation — eltanexor — will have activity against both types of cancers: solid tumor and hematological indications.

DA: Within that potentially wide range of indications that you think that your technology and pipeline can address, what indications are you targeting first to really prove the concept?

RP: Right now, we’re very focused on multiple myeloma. We have received a couple of approvals in multiple myeloma: our first was penta-refractory with XPOVIO plus dexamethasone (Xd), and our second is (Xpovio) in combination with bortezomib (Velcade) and dexamethasone (XVd) in second line plus. With the BOSTON trial, which has been our most recent approval, our ability to move up into earlier lines of multiple myeloma is pretty typical of how drugs are brought into the multiple myeloma area –– usually in a much later line at higher dosages. Originally, as we came into multi myeloma kind of penta-refractory, we were aiming at 160 mg high-dose, twice weekly, and then, as we’ve moved forward into the earlier line, we are bringing that dose down to 100 mg once weekly, combined with VELCADE, and we are truly having a significant impact for patients in terms of really strong response rates and really strong progression-free survival.

Within the multiple myeloma space, there’s been a significant amount of innovation in recent years, and patients are able to have a very long expectancy of overall survival. This has been achieved by ensuring that you attack multiple myeloma early and with really aggressive therapies. We’ve seen daratumumab, an anti-CD38 monoclonal antibody, move up very early in terms of treatments with either a protease inhibitor (PI) or an immunomodulatory imide drug (IMiD). As you move from the first- or second-line of really strong aggressive therapy to treat the patients, we’re working to enable patients to have access to multiple lines of therapy; we’re seeing more and more patients moving into second-line and third-line and then, as they progress, into fourth line, fifth line, etc.

For us, proving the only novel mechanism of action (MOA) that’s actually come into multiple myeloma in the last few years — class switching is critical. And so, the PI, the IMiD, the anti-CD38 — probably about 70% of patients are seeing all those therapies through the first couple of lines of therapy. And then for us now to have the ability to class switch again and go with a PI is critically important for patients and serves a really significant unmet need to make sure that patients have that opportunity to again have an MOA switch, to have really strong progression-free survival, and then to have the ability if they progress in the future to move on to other therapies in those later lines.

DA: In addition to those U.S. approvals, you recently received conditional marketing authorization from the European Commission for selinexor. Can you tell me a little bit about what that authorization does for that compound and what it means for the company going forward globally?

RP: We have our approval in the United States. We also recently received approval for the penta-refractory XD indication in Europe. We’re currently working with the EMA on our BOSTON indication, the XVd approval, which we’re expecting by the end of the year. I think that the opportunity to impact patients in the EU is really important. We’re working to finalize a partner that will bring selinexor to patients in Europe. We already have a strong partner in Asia; we have a strong partner in Canada. So, pretty quickly, we’re going to be able to have the opportunity to bring selinexor to more patients around the world and truly benefit patients with multiple myeloma, which is critically important for us.

DA: Richard, I know that you relatively recently took the helm as President and CEO. Can you tell us a little bit more about your own vision for the company and what you anticipate for Karyopharm over the coming decade?

RP: It’s still pretty early days. But before I moved into the roles of  the president and CEO, I had the opportunity to be on the board of Karyopharm for more than a year and a half. The same reason why I was excited about joining the board then is the exact reason I’m really excited about the opportunity to be the CEO and President –– and that is that this is just an amazing medicine, given our MOA and how we really attack cancer at the core and are foundational to many different types of cancer. I think we have an amazing opportunity to benefit patients in so many areas. I’m passionate about the science and passionate about the ability to impact patients. That opportunity to harness our scientific creativity and our urgency to impact the lives of cancer patients in many areas is what has me excited.

Right now, we’re very focused on extending our breadth and depth in multiple myeloma. As we’ve just recently moved up into the second-line plus our first quarter after approval, we were able to grow 17%;  which was really strong at a time when the market was actually declining, as there’s still being some impact of COVID and restrictions on patients getting into therapy. We’re moving through our second quarter and beyond and again really working with physicians to help them understand the dose — as we’ve changed the dosing — and to help them understand the combination. As we’ve done that, it’s been exciting to see the impact and exciting to get feedback from physicians.

Quite quickly, we’re also moving forward and expanding the opportunities for selinexor as well. By the end of this year, we expect to have some data in our SIENDO trial, which is looking at selinexor in the first-line maintenance setting for patients with endometrial cancer — a really high unmet need with no current standard of care. That opportunity to impact patients is again very exciting.

We’re also getting quite exciting data from trials in glioblastoma, which is a cancer that is very tough to treat with a very high unmet need. That will be another key area for us as we move forward. Myelofibrosis is another key area in which we are moving forward with really strong data. And on top of everything we’re doing for selinexor and a lot of data that we’re going to be bringing to market; I’m also really excited about our next generation, which is eltanexor. At ASCO, we shared some data in MDS (myelodysplastic syndrome) — high-risk MDS — where eltanexor has shown really strong benefits for patients.

For me, as I have moved from the board to the CEO position, my focus has been taking all the evidence and the science we have and asking: How do we focus on the area we can have the most impact for patients and create what we’re going to call a “portfolio in a pill?’” When you look at selinexor and then the next-generation eltanexor, we have the opportunity to move into multiple different types of cancer, which is really exciting. We just have to focus and to bring that to life for patients as soon as we can. 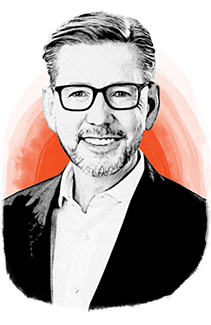 Mr. Paulson was appointed President and Chief Executive Officer of Karyopharm in May 2021 and has served as a member of Karyopharm’s Board of Directors since February 2020. He was previously an Executive Vice President of Ipsen Pharmaceuticals, Inc. and Chief Executive Officer of Ipsen North America, a global biopharmaceutical company focused on innovation and specialty care in areas of oncology, neuroscience, and rare diseases, from February 2018 to May 2021. Mr. Paulson has an MBA from the University of Toronto, Canada and an undergraduate degree in commerce from the University of Saskatchewan, Canada.