Alcoholic hepatitis (AH) is a life-threatening acute liver disease caused by chronic alcohol abuse with no approved drugs and a 28-day overall mortality rate of 26%. About 120,000 patients are hospitalized with AH diagnoses every year in the United States. In addition, about one-third of the U.S. population suffers from fatty liver disease. Ten percent of these cases have chronic cirrhosis-based fibrosis and chronic inflammation of the liver due to excess storage of fat in the liver. DURECT Corporation is advancing an epigenetic regulator program aimed at developing products to treat acute AH and nonalcoholic steatohepatitis (NASH), a type of nonalcoholic fatty liver disease. DURECT’s therapeutics in development have the potential to treat multiple organ injury and chronic liver diseases.

Our signature therapeutic, DUR-928, is one of the first endogenous epigenetic regulators being clinically tested for difficult-to-treat diseases. It is a naturally occurring, orally bioavailable small molecule that regulates the expression of genes involved in lipid metabolism, inflammatory responses, and cell survival. Phase IIa data demonstrated its potential as a lifesaving therapy for AH patients, and initial phase Ib data showed positive and compelling results for the oral administration of DUR-928 to patients suffering from NASH.

Our greatest opportunity for DUR-928 in the near term is the treatment of AH, a life-threatening acute liver disease caused by drinking in excess on top of chronic alcohol abuse. In 2016, there were approximately 120,000 hospitalizations in the United States due to AH, with a 26% mortality rate for patients within the first month of diagnosis and a 30% mortality rate within the first three months. Traditionally, doctors have used steroids to treat AH, but most have moved away from them, as clinical evidence has demonstrated that steroids fail to provide long-term improvement or boost survival rates among patients suffering from AH. DUR-928 provides considerable promise, as it is the only therapy in development that has shown the ability to effectively treat and restore gene function in acute organ injury and chronic liver diseases.

The term epigenetics refers to the control or modification of gene expression via processes that do not alter the underlying gene sequence. Such activity is typically orchestrated by chemical modifications to a cell’s DNA or to DNA-related structural proteins (histones) or by non-coding RNAs (ncRNA). Epigenetic mechanisms play an essential role in regulating many important cellular functions, from simple protein synthesis to large-scale phenotypic shifts, such as cell differentiation. DUR-928 is an endogenous sulfated oxysterol, representing a new class of therapeutics with a novel mechanism of action. DUR-928 regulates gene expression, allowing certain genes to be expressed and others to be repressed, with the ability to restore homeostasis in stressed cells.

DURECT’s Epigenetic Regulator program is a collaborative effort between DURECT and the Department of Internal Medicine at Virginia Commonwealth University (VCU), the VCU Medical Center, and the McGuire VA Medical Center. Shunlin Ren, M.D., Ph.D., professor of Internal Medicine at the VCU Medical Center, leveraged over 20 years of research into the discovery of this naturally occurring molecule. He discovered that it is made in part in the mitochondria and sulfurated in the cytoplasm, and then travels to the nucleus, where it binds and has a therapeutic utility in a wide range of diseases and syndromes. Nonclinical studies have shown it to epigenetically modulate the activity of multiple nuclear receptors and to play a key regulatory role in the expression of genes involved in lipid metabolism, inflammatory responses, and cell survival.

A phase IIa clinical trial of DUR-928 administered to 19 patients with severe or moderate AH resulted in significant promise, as all patients survived the 28-day follow-up period and had no serious drug-related adverse events. The open-label, dose-escalation, multicenter study was designed to determine the safety, pharmacokinetics, and pharmacodynamics of DUR-928 in AH patients following treatment. This included assessing liver biochemistry, biomarkers, and prognostic scores such as the Lille score. Fourteen of the 19 patients went home within just a couple of days of intravenous infusion of DUR-928, without ever receiving the second dose (which is typically administered three days later). These types of patients generally remain hospitalized for 7–10 days or face mortality while hospitalized, so these results are clearly exciting. DURECT is moving forward with a phase IIb study in AH planned for mid-2020. If approved, DUR-928 will become the first drug indicated for the treatment of AH patients.

DURECT also began enrolling patients in a phase Ib randomized, open-label clinical study in March 2019 to evaluate safety, pharmacokinetics, and signals of biological activity of DUR-928 in NASH patients with stage 1–3 fibrosis. In September 2019, DURECT announced that they had enrolled 30 of the planned 60 patients in this trial, and we expect to complete the trial in the first half of 2020, at which point we will announce top-line study results. In an earlier phase Ib trial, statistically significant reductions from baseline of several biomarkers were observed in cirrhotic and non‑cirrhotic NASH patients after a single oral dose of 50 mg or 200 mg of DUR‑928.

Beyond the Science: Ethical and Financial Considerations

Beyond the scientific breakthroughs, the health economic impact would also be substantial, as AH treatment generally costs around $50,000 and can balloon up to $800,000 if a transplant is required. With an accelerated review pathway, DURECT could potentially market DUR-928 within a few years, making it the first approved therapeutic for treating AH, which would revolutionize the space not only by providing the only lifesaving alternative to these patients but also by providing extraordinary cost savings to patients and healthcare systems around the world. This could simultaneously reduce the need for transplants, which come with their own set of logistical, financial, and ethical challenges.

It is difficult to get patients who are dying from AH to be accepted by transplant committees, as organ shortages force decision makers to make ethical calls regarding the worthiness of potential organ recipients based on their self-inflicted ailments. DUR-928 has the potential to reduce AH treatment–associated costs and eliminate the need for transplants in AH patients and, if approved, could capture the entirety of market, as DURECT could be the only company with an approved product for AH.

DURECT Corporation was initially founded to build on the success of developing controlled-release products, taking drugs that had prior approvals and improving upon them, either by increasing effective duration or delivering them to a more targeted area of the body to reduce side effects. Through the discovery and promise of epigenetic regulation, DURECT has evolved from a drug delivery company to a biotech company, with commercially scalable production capabilities for DUR-928. Beyond treating patients with AH and NASH, DURECT has seen tremendous results in a kidney model to reduce creatine, as well as other positive results in stroke, pancreatitis, and sepsis models, showing that DUR-928 could be effective across a myriad of conditions that lead to organ failure. In addition, DURECT is also developing proprietary drug delivery technologies to treat pain and ADHD. 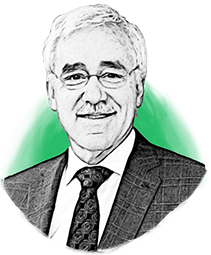 James E. Brown, D.V.M., co-founded DURECT in February 1998. He previously worked at ALZA Corporation as Vice President of Biopharmaceutical and Implant Research and Development. Prior to that, Dr. Brown held various leadership positions at Syntex Corporation. Dr. Brown holds a BA from San Jose State University and a D.V.M. (Doctor of Veterinary Medicine) from the University of California, Davis, where he also conducted postgraduate work in pharmacology and toxicology.

Q: What do you see as the key innovations or technologies that will make personalized/precision medicine a reality?