“RSV is a serious unmet medical need with no therapeutic treatment currently available,” stated Jay R. Luly, Ph.D., President and Chief Executive Ocer. “Based on today’s positive data for EDP-938, the only N-inhibitor in clinical development, our goal is to initiate our rst Phase 2b study by the end of calendar 2019 in adult outpatients with conrmed RSV infections.”

Subjects were randomized into 1 of 2 dosing arms or a placebo arm and received either a once-daily (QD) 600 mg dose, a single 500 mg loading dose (LD) followed by a 300 mg twice daily (BID) dose, or placebo for 5 days.

A total of 115 subjects were enrolled and inoculated with the challenge virus. Once RSV infection was conrmed, participants were then randomized: 38 in the placebo arm, 39 in the 600 mg QD arm (one subject was randomized, but never dosed), and 38 in the 500mg LD plus 300mg BID arm.

EDP-938 demonstrated good pharmacokinetics, and mean trough levels of drug were maintained at approximately 20-40x above the in vitro EC90 for RSV-infected human cells.

Overall, EDP-938 was generally safe and well tolerated. EDP-938 demonstrated a favorable safety prole over 5 days of dosing through Day 28 of follow-up, comparable to placebo for both dosing groups. There were no serious adverse events and no discontinuation of study drug

The study will be presented at a future medical conference.

EDP-938, Enanta’s lead N-protein inhibitor, is being developed for the treatment of RSV infection. Enanta believes EDP-938 is dierentiated from fusion inhibitors currently in development by others for RSV because this N-protein inhibitor targets the virus’ replication machinery and has demonstrated high barriers to resistance against the virus in vitro. EDP-938 has also been shown to reduce viral load below the level of detection in vivo. Additionally, it is possible that N-protein inhibitors may be eective treatments at later stages of infection

Respiratory syncytial virus (RSV) is a virus that infects the lungs and represents a serious unmet medical need in infants and children. RSV is the most common cause of bronchiolitis (inammation of the small airways in the lung) and pneumonia in children under 1 year of age in the United States. Also at increased risk of a severe RSV infection are children with compromised (weakened) immune systems due to a medical condition or medical treatment, adults with compromised immune systems and those age 65 and older. Recent estimates suggest that approximately 200,000 hospitalizations in the U.S. and EU occur each year in children under the age of two and approximately 170,000 hospitalizations in these regions occur in each year in adults aged 65 and older. There is currently no safe and eective therapy for already established RSV infection.

Enanta’s research and development activities are funded by royalties from HCV products developed under its collaboration with AbbVie. Glecaprevir, a protease inhibitor discovered by Enanta, is now sold by AbbVie in numerous countries as part of its newest treatment for chronic hepatitis C virus (HCV) infection. This leading HCV regimen is sold under the tradenames MAVYRET™ (U.S.) and MAVIRET™ (ex-U.S.) (glecaprevir/pibrentasvir). Please visit www.enanta.com for more information.

This press release contains forward-looking statements, including statements with respect to the prospects for further development with respect to EDP-938 for RSV. Statements that are not historical facts are based on management’s current expectations, estimates, forecasts and projections about Enanta’s business and the industry 3 in which it operates and management’s beliefs and assumptions. The statements contained in this release are not guarantees of future performance and involve certain risks, uncertainties and assumptions, which are dicult to predict. Therefore, actual outcomes and results may dier materially from what is expressed in such forwardlooking statements. Important factors and risks that may aect actual results include: the development risks of early stage discovery eorts in the disease areas in Enanta’s research and development pipeline, such as RSV; the impact of development, regulatory and marketing eorts of others with respect to competitive treatments for RSV; Enanta’s limited clinical development experience; Enanta’s need to attract and retain senior management and key scientic personnel; Enanta’s need to obtain and maintain patent protection for its product candidates and avoid potential infringement of the intellectual property rights of others; and other risk factors described or referred to in “Risk Factors” in Enanta’s most recent Form 10-Q for the scal quarter ended March 31, 2019 and other periodic reports led more recently with the Securities and Exchange Commission. Enanta cautions investors not to place undue reliance on the forward-looking statements contained in this release. These statements speak only as of the date of this release, and Enanta undertakes no obligation to update or revise these statements, except as may be required by law. 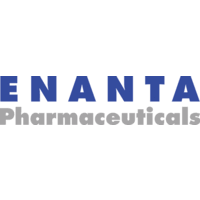 Enanta Pharmaceuticals is using its robust, chemistry-driven approach and drug discovery capabilities to become a leader in the discovery and development of small molecule drugs for the treatment of viral infections and liver diseases. Enanta’s research and development eorts are currently focused on the following disease targets: respiratory syncytial virus (RSV), non-alcoholic steatohepatitis (NASH)/ primary biliary cholangitis (PBC), and hepatitis B virus (HBV).