Heart attack, chronic heart failure, critical limb ischemia and stroke are all caused by an acute or chronic deficit in the supply of oxygenated blood. The conventional treatment approach is to unclog or bypass large vessels to restore the supply of oxygenated blood. This approach, however, ignores the largest part of the vascular system — the microvasculature that delivers oxygen to all the tissues of the body.

One of the body’s natural responses to areas with low levels of oxygenated blood is the recruitment of CD34+ cells — naturally occurring, preprogrammed endothelial progenitor cells residing primarily in the bone marrow. In response to ischemia (i.e., a lack of oxygen in a tissue), CD34+ cells are recruited to those tissues, where they promote angiogenesis of the microvasculature. By generating new microvasculature, the cells restore the blood supply, reducing the serious adverse consequences caused by chronic ischemia.

Nearly five years ago, Caladrius Biosciences elected to focus on the development of CD34+ cell therapies for the treatment of cardiovascular diseases (CVDs). Our CD34 technology leverages the body’s natural repair mechanisms to induce the development of new blood vessels, restoring function and preventing tissue death by improving blood flow.

In our autologous cell therapy platform, a potent, concentrated population of the patient’s own CD34+ cells is obtained via apheresis after granulocyte colony-stimulating factor (GCSF) mobilization, eliminating the need for bone marrow aspiration.

The CD34+ cells are isolated, concentrated and formulated and then administered via injection to the same patient. Because the cells are preprogrammed, there is no need for modification, as is the case for CAR-T cell therapies. The expansion and formulation of our cell therapies is achieved using a well-established and well-characterized GMP process.

Caladrius currently has three cardiovascular programs in the middle to late stages of clinical development based on our autologous CD34+ cell therapy platform.

CLBS12 is designed to stimulate the growth of microvasculature and address conditions caused by critical limb ischemia (CLI). No medical therapy has ever been shown to been effective in this condition. We are completing a pivotal phase II trial in Japan investigating the ability of CLBS12 to heal non-healing ulcers and eliminate the severe pain caused by a lack of blood supply in the legs. CLBS12 has received SAKIGAKE designation (similar to breakthrough therapy designation in the United States) for expedited development and review and has been deemed eligible for consideration for early conditional approval by the Japanese regulatory authorities. The full readout of data for this trial will occur in 2020.

CLBS14 is designed to induce capillary growth to regenerate microcirculation in the heart. It is administered via intramyocardial injection and formulated specifically to enhance the potency of the natural process whereby CD34⁺ cells repair and regenerate microvasculature.

CLBS14 is currently in late-stage development in the United States and has been designated a Regenerative Medicine Advanced Therapy (RMAT) by the U.S. FDA for the treatment of no-option refractory disabling angina (NORDA). In phase II studies, treated patients, most of whom were middle-aged, showed reduced mortality, an increase in exercise tolerance and a reduction in chest pain. A phase III study is expected to be initiated in early 2020.

All patients with cardiovascular diseases could potentially benefit from treatment with CD34+ cell therapies.

CLBS16 is being studied in the ongoing ESCaPE-CMD phase II U.S. proof-of-concept clinical trial for coronary microvascular dysfunction (CMD). We have completed enrollment in this small study, which is investigating the performance of CD34+ cell therapy in patients who have refractory chest pain but no blockage of their coronary arteries and thus suffer from chest pain due exclusively to microvascular insufficiency. Preliminary data reveal a significant improvement in coronary flow reserve (CFR) and reduction in chest pain in treated patients. 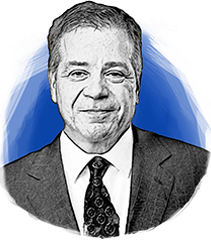 Dr. Losordo joined Caladrius in 2013 and is board-certified in internal medicine, cardiovascular disease, and interventional cardiology. Dr. Losordo was director of the Feinberg Cardiovascular Research Institute and the Eileen M. Foell Professor of Heart Research at Northwestern University’s School of Medicine and director of the Program in Cardiovascular Regenerative Medicine at Northwestern Memorial Hospital. He also held appointments at Tufts University, St. Elizabeth’s Medical Center, and Baxter Healthcare. He received his M.D. from the University of Vermont.