Antibiotic resistance is a tremendous issue today. Current antibiotics on the market have all been derived from natural sources and are thus not designed to avoid resistance. Australian company Recce Pharmaceuticals (ASX: RCE) is advancing a synthetic polymer antibiotic designed with optimum properties that exhibits high potency against a broad range of bacteria.

Antibiotic resistance currently accounts for an estimated 700,000 deaths worldwide. If antibiotic resistance were allowed to grow unchecked, the number of deaths per year would increase to 10 million by 2050 and cost the world up to 3.5% of its total gross domestic product ($100 trillion).

The Challenge of Sepsis

Sepsis, an infection that spreads to the bloodstream, affects more than 30 million people worldwide, with approximately 270,000 deaths in the United States alone each year. There are currently no drug therapies specifically approved for the treatment of sepsis.

Once sepsis occurs, the likelihood of survival decreases by 6% each hour the disease goes untreated. When a patient is diagnosed with sepsis today, blood is drawn and sent to the lab to determine the infectious species. Screening of antibiotics is then performed to identify which will work best. Typically, 24–48 hours pass before treatment begins. Not surprisingly, the death rate ranges from one in three to one in five.

Recce Pharmaceuticals is looking to address both the issue of antibiotic resistance and the need for a universal antibiotic for the treatment of sepsis.

The name of the company, Recce, originates from the military term reconnaissance, or “the aggressive assessment of the disposition of the enemy.” We have applied this same aggressive philosophy to antibiotics, designing molecules that can enter the human body, bear down on the threat (deadly bacteria) and eliminate that threat without being noticed (no side effects).

No new class of human antibiotics has been commercialized since 1987. The new class of compounds synthesized by Recce are polymeric molecules designed to overcome the limitations of traditional antibiotics, which operate by a “lock and key” mechanism. When a bacterium mutates/evolves, that mechanism no longer functions, because the lock has changed.

Once RECCE® antibiotics enter the bloodstream, they are attracted to the plasma membranes of bacteria via a hydrophobic interaction. They then bind to plasma membrane proteins, rapidly causing the bacterial cell walls to weaken. Due to the unique high metabolic pressure in bacteria, the cell walls collapse or burst (cell lysis), leading to bacterial cell death.

Unlike conventional antibiotics, which are produced via fermentation processes that require large-scale bacteria culture and several subsequent purification stages, RECCE® antibiotics can be produced in just hours via a high-yielding (99.9%) process starting from inexpensive raw materials. In addition, the process requires no specialized and expensive waste removal and presents minimal risk of environmental contamination.

RECCE® 327 meets all of the requirements of a next-generation antibiotic. In addition to showing rapid efficacy (typically 20–60 minutes) as a broad-spectrum antibiotic, successful results have been obtained for safety, toxicology and dose-escalation, and repetition studies in four animal species. After more than 25 repetitive uses, RECCE® 327 did not display any loss of antibiotic activity.

The drug has been shown not to cause cell mutation and to be selective against bacteria in the bloodstream. It also clears rapidly from the bloodstream after dosing without any evidence of anaphylactic reactions. Finally, it is 100% soluble at all pHs, including the very acidic stomach environment.

Recce has recently executed a clinical trial agreement for an independent phase I intravascular safety assessment of RECCE® 327 antibiotic as a treatment for sepsis at an Australian-based trial facility. We are also working to initiate an independent phase I/II topical efficacy study involving patients with a range of bacterial wound, burn, and skin infections.

The potential to aid burn and wound victims with our new antibiotic is significant. Damaged areas on the skin are known to develop a significant bacterial burden. The presence of these bacteria often prevents proper healing, leaving patients vulnerable to contamination. Treating infections via topical application at an early stage is therefore highly beneficial.

RECCE® 327 can also be administered via inhalation. Recce is exploring nebulizer use with the antibiotic for the treatment of patients with tuberculosis. There are additional early indications that the new antibiotic can be used to treat infections of the gastrointestinal tract. Unlike traditional antibiotics, which kill both the bad bacteria in the upper intestine and good bacteria in the lower intestine, RECCE® 327 appears to lose its antibacterial activity by the time it reaches the lower intestine. Preclinical studies also suggest that RECCE® 327 has prophylaxis potential and could possibly be used as a preventive treatment.

In the current antibiotic stewardship model, clinicians delay the use of antibiotics with the aim of slowing the development of resistance. Unfortunately, this approach involves monitoring the number of antibiotics being consumed rather than the number of patients that die because antibiotic treatment was not administered at the time of diagnosis.

We aim to change that model and empower clinicians to prescribe and dose patients at the first presentation of infection, thereby reducing the ability of the bacteria to spread. This goal is possible because RECCE® 327 is effective against all types of bacteria and operates via a mechanism of action that cannot be thwarted by bacterial mutation.

The use of RECCE® 327 should also reduce the pressure on existing antibiotics. If drugs like vancomycin are prescribed less frequently because patients are treated with RECCE® 327, these existing and effective antibiotics could become more effective and ultimately more commercially valuable.

We are proceeding apace with RECCE® 327 for the treatment of sepsis and several other indications. We are also monitoring the need for antibiotics during the COVID-19 infectious disease crisis. Patients fighting viral infections such as COVID-19 have compromised immune systems and typically experience a high prevalence of bacterial spread. In many cases, patients actually die from septic pneumonia rather than the coronavirus infection itself, and antibiotics are an important component of the overall treatment model. 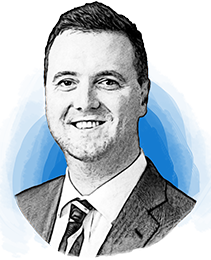 James Graham is the Executive Director of Marketing and Business Development at Recce Pharmaceuticals. James has extensive experience in marketing, business development, and commercialization of early-stage technologies with global potential. After being brought on by Dr. Graham Melrose, James assisted Dr. Melrose in acquiring a laboratory facility at Bentley’s Technology Park to expand upon the promising research. In the early days of Recce, James would support in the capital-raising initiatives.