Harvard researchers are using CRISPR technology to engineer living cells to capture, store and propagate data for future use.

Current computers are based on inorganic technology, however, scientists at Harvard University are taking a completely different approach–using living cells such as bacteria to record data that can be accessed at a later time. Cells might also be able to record their experiences during development and throughout their lifetimes.

The first molecular recorder based on the CRISPR system was reported by George Church, a Core Faculty member of the Wyss Institute for Biologically Inspired Engineering, Robert Winthrop Professor of Genetics at Harvard Medical School and a Professor of Health Sciences and Technology at Harvard and MIT, and colleagues in 2016. CRISPR technology was used to enable bacterial cells to acquire bits of chronologically provided, DNA-encoded information to generate a memory of them. The information was stored in the genome of the bacteria as an array of sequences in the CRISPR locus and could be recalled and used to reconstruct a timeline of events.

Recently, the researchers reported further advances. Using the CRISPR system, they have been able to record highly complex information in living cells, including a digitized image of a human hand and a sequence of a galloping horse.

CRISPR imparts immunity to bacteria by generating “spacer” sequences following a viral infection by capturing virus DNA molecules and adding them as new elements upstream of previous elements in a growing array located in the CRISPR locus of bacterial genomes. The CRISPR-Cas9 protein uses this information to destroy these viruses when they return.

The Harvard group has engineered other CRISPR proteins — Cas1 and Cas2 — to perform as molecular recording tools. Using new knowledge of the sequence requirements for optimal spacers, they have been able to greatly increase the ability to record “memories” in the genome, including external information and information based on the experiences of the cells.

“Harnessed further, this approach could present a way to cue different types of living cells in their natural tissue environments into recording the formative changes they are undergoing into a synthetically created memory hotspot in their genomes,” Church said.

Explained Seth Shipman, the study’s first author: “We designed strategies that essentially translate the digital information contained in each pixel of an image or frame as well as the frame number into a DNA code, that, with additional sequences, is incorporated into spacers. Each frame thus becomes a collection of spacers. We then provided spacer collections for consecutive frames chronologically to a population of bacteria which, using Cas1/Cas2 activity, added them to the CRISPR arrays in their genomes. And after retrieving all arrays again from the bacterial population by DNA sequencing, we finally were able to reconstruct all frames of the galloping horse movie and the order they appeared in.”

Next, the team will work on engineering the system to memorize biological information and developing molecular recording devices in other cell types. “One day, we may be able to follow all the developmental decisions that a differentiating neuron is taking from an early stem cell to a highly-specialized type of cell in the brain, leading to a better understanding of how basic biological and developmental processes are choreographed,” said Shipman. 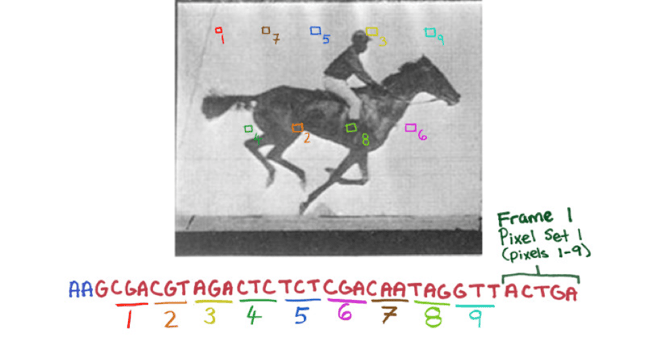 A new CRISPR system-based will allow digital data to be recoded, similar to successive frames of a movie — of a galloping horse, one of the first made ever, in a population of living bacteria. There is hope that this molecular recording device will allow researchers to enable cells to record changes experienced during development, including exposure to environmental or pathogenic signals.