There are more than 350 hereditary eye diseases, and more than 60% of cases of blindness among infants are caused by inherited retinal diseases (IRDs). Treatment of genetic eye disorders is largely experimental, except for surgeries on the cornea, lens and vitreous.

While gene therapies have significant potential for the treatment of rare genetic eye disorders, their administration requires subretinal delivery, which involves surgery. Irreversible changes to the genetic code that cause problems are also difficult to address.

RNA medicines enable temporary changes, but have very long half-lives in the eye, allowing for infrequent dosing. As importantly, they can be administered via intravitreal injection.

Eliminating the Underlying Cause of Disease

ProQR Therapeutics is developing therapeutics comprising short pieces of synthetic RNA. By binding to damaged RNA in the cell, they enable the correct translation process to take place, leading to restoration of the expression of proteins involved in many physiological processes.

Our targeted RNA oligo therapies are designed to address the mutations causing specific disorders. Their broad distribution in all retinal cell types allows for treatment of diseases affecting both the central and peripheralretina. ProQR is initially targeting orphan inherited blindness diseases with well-understood causality.

Lead Candidates in the Clinic

Sepofarsen (formerly QR-110) is being developed for the treatment of patients with Leber’s congenital amaurosis (LCA), the most common genetic cause of childhood blindness. Of the more than 19 known genes involved in LCA, the most prevalent is the CEP290 gene causing LCA10. Sepofarsen enables production of functional CEP290 protein, halting disease progression and potentially reversing some effects of LCA10. In a phase I/II clinical trial, the majority of patients treated with sepofarsen experienced a substantive overall improvement in vision at 12 months of treatment. A pivotal phase II/III trial is underway, with topline results expected in the first half of 2021.

QR-421a is intended to treat Usher syndrome type 2, the leading cause of combined deafness and blindness due to a lack of (functional) usherin protein. The RNA therapy is designed to exclude exon 13 of the USH2A gene, removing the pathogenic mutation. A phase I/II study is underway to evaluate the safety and tolerability of QR-421a, with initial results expected in early 2020.

QR-1123, initially discovered by Ionis Pharmaceuticals using its proprietary antisense technology, is designed to treat patients with autosomal dominant retinitis pigmentosa (adRP) resulting from the P23H mutation in the RHO gene, the most prevalent form of the disease. Treatment leads to inhibition of a mutated, toxic form of the protein rhodopsin via knockdown of the mutant mRNA via RNase H–mediated cleavage. We recently began enrollment for a phase I/II trial.

One of the technologies applied to RNA therapy development at ProQR is our proprietary, Axiomer RNA editing platform, which involves editing oligonucleotide (EON)-directed therapeutic editing. Endogenous adenosine deaminase acting on RNA (ADAR) is recruited by a single-strand EON and transduces I groups to G groups, thereby allowing targeted G-to-A mutations.

Given that more than 20,000 diseases are caused by G-to-A mutations, we believe this technology has the potential to yield new medicines for currently untreatable diseases. Previously, ProQR established a first partnership around the Axiomer technology with Galapagos N.V. focused on select fibrosis targets.

ProQR has plans to become a multiproduct platform company independently developing and commercializing therapies for patients that suffer from IRDs. Our Vision 2023 strategy includes having at least two commercial products and at least three late-stage and seven early-stage programs in development by 2023, while expanding our RNA platform capabilities in other therapeutic areas through our subsidiary Amylon Therapeutics (brain disease) and spin-out Wings Therapeutics (dermatology) and establishing selective partner programs in non-core therapeutic areas and non-rare diseases.

Given the high unmet need across many of the 350+ IRDs known today, we believe this integrated approach will allow us to more efficiently turn our scientific innovation into multiple potentially life-changing medicines for patients. With our experienced team, predictive translational models and capabilities in precision medicine, we are well-positioned to execute on this long-term strategy and advance the field of medicines for inherited blindness. 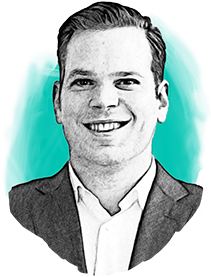 Daniel A. de Boer is a Dutch serial entrepreneur and has acted as the founding Chief Executive Officer of ProQR Therapeutics since the company’s incorporation in 2012. When Daniel’s newborn son was diagnosed with a rare genetic disease, he decided to start ProQR to develop drugs that could address this. Prior to founding ProQR, Daniel was the founder and CEO of several IT companies, including RNA Systems, PC Basic and Running IT, that he led through several phases of growth. Daniel is also co-founder and advisor to the CEO at Amylon Therapeutics