Levicept Founder and CEO Simon Westbrook discusses his experience in selecting and working with a global CDMO partner, and the value Lonza brought to his virtual company, which he established to develop the molecular design and process development for a complex protein he had begun working on while at Pfizer.

Genesis of a Small Biotech

I founded Levicept to continue working on a novel analgesic for the treatment of osteoarthritis that I believed had a fundamental difference to other therapeutics. Unlike anti-nerve growth factor (NGF) molecules, which completely block NGF but can cause rapid progression of osteoarthritis and neuronal toxicity, our fusion chimera protein manipulates this pathway in a targeted manner.

Throughout our eight years of existence, we have been a true virtual company with only a couple of employees, dedicated to outsourcing work to the very best partners we can find to ensure the highest quality and prospects for success. We know that ultimately we will likely need to partner with Big Pharma to get our molecule to market.

I first started working on the research leading to LEVI-04 while at Pfizer. We failed twice with contract development and manufacturing organization (CDMO) partners because the molecule is complex and there were challenges in understanding and developing it.

When I established Levicept, I didn’t have preconceived ideas about working with a CDMO, but I knew we would need a company with strong scientific expertise balanced by flexibility. I had lots of ideas regarding the molecular design, but this was also a completely novel concept that had not been manufactured before. I was aware of Lonza from my time at Pfizer but had never worked closely with the CDMO.

We began the collaboration and were looking to build a dossier of work more advanced than what is generally done even at Big Pharma companies. I was therefore looking for the best possible CDMO partner to design the molecule, develop a scalable GMP process, and get the optimum candidate into the clinic as efficiently as we could.

I was influenced in speaking to Lonza by Kevin Johnson of PanGenetics (acquired by Abbott Laboratories), who had experience with them on an anti-NGF candidate, and Patrick Hextal, my CMC consultant, who has worked with Lonza for many years. They both had excellent established relationships with the CDMO, and when we began engaging with them, the team at Lonza was very interested in the complex protein, even though it’s not what their platforms are best known for. Lonza was very enthusiastic about what could be achieved.

Once I began working in-depth with the Lonza team – initially with the team focused on late discovery activities at the Cambridge, UK site – I was quickly reassured that our decision was a good one because Lonza clearly had the resources, expertise, and flexibility to help advance my idea for a complex IgG fusion chimera protein targeting chronic pain – specifically osteoarthritis.

Building a Molecule and a Relationship

The research team at Lonza’s Cambridge, UK site understood the science, and were very collaborative from the perspective of listening to my point of view and what I wanted to achieve. Together, we developed the asset, tweaking the design of the molecule to achieve desired attributes for efficacy and manufacturability.

I appreciated how the Lonza researchers were really interested in this unique molecule and the challenge it posed in terms of the need for in silico work and molecular design. Critically, for me, they listened regarding the key features I wanted, including the need to avoid stimulation of anti-drug antibodies (ADAs).

We worked together in a close collaborative effort from the outset. Everyone knew that we were trying to develop a novel treatment for a disease that impacts millions of people. Looking back, I recognize how critical the choice of CDMO was, as Lonza made a fundamental contribution to LEVI-04, overcoming challenges and advancing development of the molecule.

After developing a few prototype molecules, we selected the most promising candidate and conducted comparison tests against Tanezumab, an anti-NGF candidate, in preclinical models of osteoarthritis. In these studies, the adverse events previously observed in humans with Tanezumab were replicated, while we were able to demonstrate combination analgesia and joint repair with LEVI-04. It was a vital breakthrough.

The research work with Lonza established critical intellectual property for Levicept, and meeting our initial milestones made it possible to raise series A funding. That enabled us to advance LEVI-04 into the clinic (Phase I study) and to produce the larger quantities needed for toxicology studies. To do so, the laboratory process developed at Cambridge was transferred to pilot scale manufacturing at Lonza’s facility in Slough, UK.

This transfer was successful, even though LEVI-04 is not a traditional mAb commonly associated with Lonza’s famed production platform. We had perhaps our most challenging moment when the molecule failed on our first pilot run. However, the team at Lonza had the technical ability and root cause analysis strategy to quickly diagnose the problem. Working together, we were able to rectify all of the issues and had the second pilot batch running within six months. On the positive side, these challenges led to us learning a great deal more and we ended up with a much greater understanding of our molecule, which was highly beneficial.

Open communication was also fundamental to the successful resolution of the first pilot batch issues. Everything was discussed and we continue to conduct joint project team meetings, generally once a week, but also on an ad hoc basis as needed. My team relies on one or two consistent Account and Project Management contacts at Lonza, bolstered by the great relationship our CMC consultant has with many different people there.

We continue to work closely with Lonza to address some purification issues. Part of the challenge is developing analytics for this unique molecule, which is heavily glycosylated and thus not suited to existing platform methods. Over time, Lonza has gained a greater understanding of the molecule and worked with a third party with specialized expertise in this area, which has resulted in the innovation of new techniques that will help address the issue.

Beyond my concern about finding a CDMO with the expertise to understand and advance our complex protein successfuly, I was also apprehensive that, as a small biotech, we may receive a lower prioritization than Big Pharma companies that larger CDMOs like Lonza are known to serve so well.

Initially, I thought that, as a single-asset biotech, we might be neglected, especially in the difficult moments or problematic scheduling, but that has not been the case with Lonza. Despite the challenging circumstances facing the industry and global supply chains in 2020 and 2021, with so many therapeutic and vaccine developers vying for GMP capacity, we have always felt that Lonza is doing its best for us. I am confident we will get our GMP slot in 2021 to produce material for our Phase II trial.

Just as importantly, Lonza has ensured that we have been able to have continuity with the same group of scientists. For instance, there are two scientists that have worked on the purification process for LEVI-04 from the day we moved from Cambridge to Slough. They understand the molecule in depth and have been involved in the project throughout the scale-up efforts. At present, we are working to improve one of the capture steps, and Lonza’s scientific knowledge is invaluable. As a consequence, there is no wasted time repeating previous work or trying to reinvent the wheel.

In addition, Lonza has been open to adopting approaches to scale-up that we have proposed that they might not normally pursue. As an example, the first GMP batch was at the 200–250 liter scale. We wanted to move directly to a 1,000-liter GMP batch without doing another pilot run. While Lonza was hesitant at first, they listened to our reasoning and eventually embraced the idea that moving to a 1,000-liter GMP batch carried only moderate risk.

Studies are now planned, with risk assessments being performed not only in Slough, but also at Lonza’s Singapore facility, to ensure that we are able to meet our aggressive timeline. The goal is to establish proof of concept for LEVI-04 in patients with osteoarthritis of the knee. We will then look for an exit at that stage and hopefully smoothly transition all of the work done with Lonza to the buyer.

Working with Lonza was the right choice for Levicept and the development of LEVI-04. Having an expert CMC consultant, particularly someone who has worked with Lonza previously, was highly beneficial. He helped us develop a strong relationship with Lonza and facilitated collaboration with many different people within the company. Engaging with Lonza very early in the process was also important, as the Applied Protein Services team at Cambridge added tremendous value by designing the molecule to meet our specific goals while still aligning in the best way possible to Lonza’s platform approach.

LEVI-04 is an unusual and complex molecule, and it did cause some issues. But issues arise with every project and every service provider. What I’m grateful for is that Lonza’s scientists at Slough had the knowledge, expertise, and systems in place to rapidly analyze and resolve the issues we had. They also understood what we were trying to achieve and worked to do that in the most cost-effective manner. Lonza gave us many different options, and as a small biotech with a limited budget, having those options – and the help of our CMC consultant – made it an easier path to develop and produce LEVI-04. 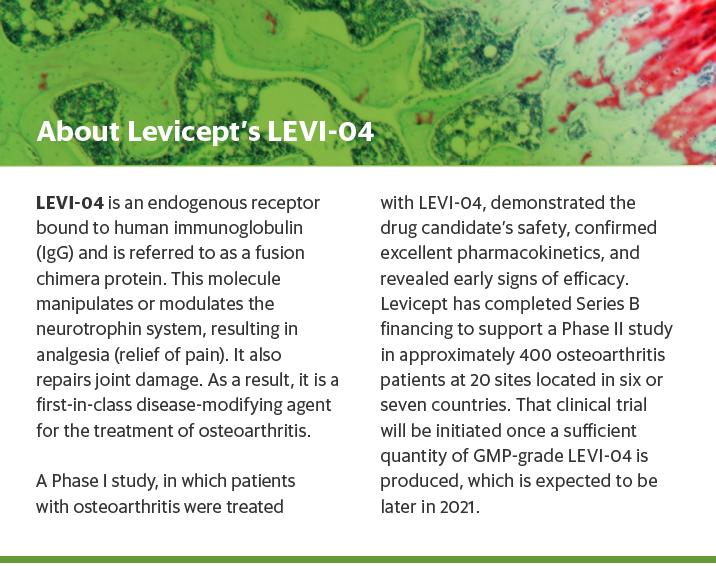 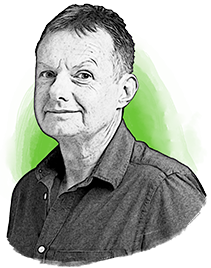 Simon has a strong track record of innovation and delivery of drug development programmes with 20 years of drug discovery and development experience, including 15 years at Pfizer Sandwich UK. Simon has played pivotal roles in progressing novel, successful projects from conception of idea to delivery of clinical data. Simon is the named inventor on numerous patents, including p75NTR-Fc for the treatment of pain. He was a team member of four programmes that achieved positive readout in proof-of-concept phase II clinical trials, of which he is the co-inventor of three.

The Value of a Custom Lipid Solutions Provider for mRNA Delivery