A Look Back at The Road To BIO

A once-in-a-lifetime journey from Boston to San Diego inspires historical, cultural, and scientific discoveries — and garners a deeper understanding of the people who have fueled it all.

In 1992, after arriving in New York City by way of Studham, a village in Bedfordshire, UK, Nigel Walker set out to complete his studies. As he ruminated about the topic for his senior dissertation, he couldn’t shake the feelings of disgust associated with the amount of advertising that was being directed at children from cigarette corporations. As such, he planned to embark upon the journey of a lifetime, observing and documenting cigarette billboards in major cities and highways from coast to coast, in the name of America’s youth. After finding a rental car company with a one-way option, Nigel was raring to go — that is, until he learned that he had to be 25 years old to rent a car. In one fell swoop, the dream was over, at least temporarily. The ambition of his 21-year-old self never died, and 25 years later, it grew into something even bigger in scale, concept, and significance.

Less than two years after graduating college, Nigel founded That’s Nice, a New York City–based strategic marketing agency that evolved to serve companies exclusively in life and materials sciences. Today, a large portion of its client base comprises pharmaceutical and biopharmaceutical contract research organizations (CROs) and contract manufacturing and development organizations (CDMOs), as well as those specializing in intermediates, excipients, logistics, and equipment. After working closely with hundreds of these companies over the years, it became clear that drug discovery and development is arduous, expensive, and time consuming, with an average drug development timeline of 14 years to complete post-discovery, with increased speed and strict timelines at the centerpiece of nearly all go-to-market endeavors. 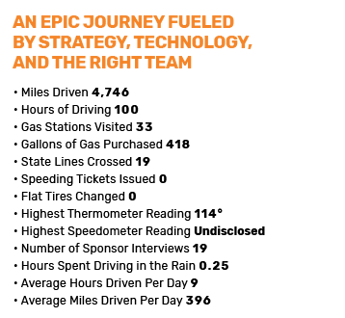 The Dream: Remixed and Remastered

In 2017, as somewhat of a mashup and coming-to-fruition of young Nigel’s dream of a coast-to-coast journey, combined with a desire to illustrate what wins through adversity, The Road To BIO was born: a 19-state journey from Boston to San Diego in a Lamborghini Aventador SuperVeloce (SV) Roadster for the BIO International Convention — the Biotechnology Innovation Organization’s largest annual event and the largest biotech event in the world.

This adventure was not intended to be a metaphorical comparison between drug development and road trips, but rather served as an act of solidarity. “It’s about the amount of effort that goes into our projects — the teamwork, the collaboration, and the pulling together to deliver for our clients,” Nigel remarked at the time. The Road To BIO was about breakthroughs—breaking through cost, risk, and regulatory pressures on pharmaceutical development, something That’s Nice has been able to witness collaboratively with its clients for the past 25 years. The road to commercial drug success requires a synergetic blend of strategy, technology, teamwork, and partnership, elements that were also required to successfully navigate the challenges of a cross-country journey in a world-class sports car.

The Team | The Transportation

A team of seven That’s Nice employees was carefully selected to embark upon the 12-day speed-to-market campaign, which would culminate at the San Diego Convention Center. Nigel Walker, Founder & Managing Director, would take the wheel of the Lamborghini, a vehicle well known for its speed and sleek design, but not synonymous with comfort, safety, fuel economy, or passenger and cargo capacity. Add to that all of the unknowns associated with traversing diverse terrain and varying road and weather conditions, as well as pushing a sports car 5,000 miles in 12 days, and you have all the makings of a potentially disastrous journey. But what better vehicle to illustrate the speed that so often intersects with commercial success and costly failure in drug development than a Lamborghini?

Getting the rest of the team across the country safely would require a support vehicle, not unlike the need for partner support in drug development and market deployment. An RV seemed fitting to accommodate the needs of the rest of the team, given the nearly two weeks they would spend on the road. However, as comfortable and accommodating as the RV was, it didn’t come without its own set of challenges and limitations. Its large and bulky configuration, with its height, weight, and speed restrictions, made for a less than ideal vessel to conquer any and all road conditions, nor could it keep pace with a Lambo capable of speeds exceeding 200 miles per hour. Needless to say, the team encountered challenges that were not initially anticipated.

Resonance on The Road To BIO

There was plenty of skepticism and cynicism surrounding Nigel’s ambitious plan, much of it born out of genuine concern for the team’s safety. With only four Lamborghini dealerships along The Road To BIO, the slightest mechanical issues could threaten the success of the voyage. But the team prepared as best they could, packing spare tires, oil and fluids, and a jack to give themselves the best shot at making it across the country. A series of ironic or perhaps fortuitous events on the road aligned seamlessly with the many insightful takeaways the team gathered from conversations with the innovative players they met along the way, creating an uncanny resonance that holistically embodied the spirit and essence of the trip.

The first stop was in Cambridge, Massachusetts, a hotbed for pharmaceutical discovery. The team met with Unither Pharmaceuticals’ David Kudla, a European leader in single-unit dose technologies. They also met with M+W Group’s Peter Cramer in Boston’s Seaport “Innovation District,” who was working on nanotech, bio-nano, cell therapy, and industrial biotechnologies. Next up was Connecticut, where the team ran into its first transportation challenge; the RV was unable to scale the ramp to the parking lot of Avara Pharmaceuticals’ global headquarters. But as they met with Avara’s Bill Pasek, they were reminded of the importance of navigating these types of pitfalls across the development pathway to deliver upon commitments, and onward they traveled.

The next leg of The Road To BIO had the team crossing New York’s Tappan Zee Bridge, which was under rapid reconstruction to meet safety standards. They also met with BioVectra’s Oliver Technow, who discussed why building bridges for customers in their development efforts is so important. Once safely across the bridge, the team met with Envigo’s Joe Bedford in New Jersey, who had some wise words about putting early development on the right road by meeting regulatory guidelines — a fitting discussion, because shortly thereafter the team had a minor run-in with the local regulatory agency.

Bristol, Pennsylvania, was next on the road, where the team visited Abenza’s award-winning CRO facility and talked antibody–drug conjugates with Sven Lee. From there, they visited Plymouth Meeting, where Matthew Kennedy and the CRB team were empowering customers to make smart manufacturing investment decisions with FutureFacility™ concepts. By way of Washington DC, the team stopped in Sterling, Virginia, where the balance of speed, safety, and partnership collided at the Lamborghini dealership, where micro-particles of metal were discovered in the vehicle’s fluids. The technician got the team safely back on The Road To BIO in just over two hours, an undertaking that typically would have required eight. The next stop was in Bristol, Tennessee, home of the Bristol Speedway. UPM Pharmaceuticals’ James Gregory and Dr. Ed Scholtz reminded the team that speed to market is not possible without a flexible agile partner that can navigate the ebbs and flows that a formulation development can take, while adhering to strict timelines.

From Tennessee to the Carolinas, Alcami’s Natasha Howard shed light on how her organization’s differentiating value lies in its ability to reduce timelines through the integration of teams and systems across the organization. A stretch from Alabama to Texas was filled with plenty of sights, sounds, and delicious barbecue, and upon arrival in Irving, Texas, the team met with Dr. Donald Loveday, who described how Celanese is breaking barriers in bioavailability and compliance by combining innovative drug delivery technologies with EVA excipients. In College Station, G-CON Manufacturing’s Michael Katsis and Sidney Backstrom explained how G-CON’s Cleanroom PODs® significantly reduce time and costs typically incurred in a construction project.

Upon arrival in Tucson, Arizona, the team met with Icagen’s Dr. Kenneth Wertman, who shared what it means to be a truly integrated partner in early discovery, which sets the stage for success down the road; this echoed the sentiments of the team as they reflected upon their journey to this point.

The trip was winding down, with only one more state line to cross. The final visit on The Road To BIO had Bio-Rad’s Steven Blakely sharing how Bio-Rad takes innovative technologies and creates workflows that enable developers to accelerate the process, while employing a system-wide approach that facilitates collaboration among teams. The team couldn’t help but feel that this final interaction was a fitting end to a journey fueled by technology, executed by strategy, and driven home by a team unified in its aspiration to reach San Diego on The Road To BIO.

Previous: Exploring Europe on the Road To CPhl Milano

Staying Ahead of the Curve with Outsourced Program Management