Neurological diseases, such as autism spectrum disorder and Parkinson’s disease, have traditionally been treated with limited success using large and small molecule drugs that must penetrate the blood–brain barrier. Axial Biotherapeutics is taking a radically different approach to treatment with candidate drugs designed to influence the gut microbiome.

The gut–brain axis (GBA) involves the central and enteric nervous systems, linking the emotional and cognitive areas of the brain with peripheral intestinal functions influenced by the gut microbiome.1 The communication occurs in both directions — from the gut to the brain and vice versa — through neural, endocrine, and immune links. The gut microbiome is composed of up to 1014 microorganisms — 10 times the number of cells in the human body.

Disturbances in the commensal bacteria in the gastrointestinal (GI) tract have been associated with a number of different diseases, including neurodegenerative diseases and neurodevelopmental and psychiatric disorders of the central nervous system (CNS). The gut microbiomes of patients with Parkinson’s disease (PD) and autism spectrum disorder (ASD) are clearly different from those of typically healthy people. While each disease is different, so too are the disturbances in the gut microbiome, which manifest as a wide range of complicating factors, including constipation, diarrhea, leaky gut and celiac disease.

For this reason, many academic researchers and startup biotech companies are exploring the possibility of treating PD, ASD, multiple sclerosis, Alzheimer’s disease, major depressive disorder, anxiety and other debilitating conditions via the gut microbiome.

In general, two types of mouse models are used in studies of the GBA: traditional and humanized. In the humanized models, human microbiota are transferred to germ-free mice. Humanized mouse models provide a better understanding of the potential responses that may occur in humans and may be more predictive than traditional models; both are used to provide comparison results.

Axial Biotherapeutics is taking a revolutionary approach to treating CNS diseases. It has traditionally been assumed that any drug developed for these types of disorders must reach the brain via passage through the blood–brain barrier — a frequently challenging goal to achieve. With our novel drugs that provide localized, gut-retentive treatment, there is no need for systemic delivery of high doses to reach the brain, potentially leading to both greater efficacy and improved safety profiles.

The development of these new treatments at Axial focuses on exploring the mechanisms by which the gut microbiome is driving or contributing to disease. Transplants of human microbiota from both patients and neurotypical controls into mouse models allows the interrogation of microbe function, genetic dysregulation and metabolite production that can be linked to disease symptoms.

PD is a key focus for Axial. Often, GI problems occur in people with PD years before the onset of motor problems, suggesting that the gut microbiome may be a driver of the disease. Our co-founder, Caltech Professor Dr. Sarkis K. Mazmanian, has demonstrated that gut bacteria potentiate numerous PD-like features in a validated mouse model of disease, suggesting that alterations in the human microbiome may be a novel and causal risk factor for PD.2 In mice overexpressing human α-Synuclein (α-Syn), intestinal microbiota are required to induce GI and motor deficits and α-Syn pathology in the brain. Antibiotic treatment ameliorates pathophysiology in adult animals, while microbial colonization promotes this pathophysiology, suggesting that disease arises from postnatal signaling between the gut and the brain. Colonization of α-Syn–overexpressing mice with microbiota from PD patients enhances motor and GI impairments compared with microbiota transplants from healthy human donors.

Evaluation of the organisms and genes overrepresented in the PD microbiome has enabled identification of a druggable pathway that is sufficient to induce motor and GI symptoms and brain pathology in a validated disease model of PD. Axial’s PD program includes both the AB-4166 and the AB-4000 series. AB-4166 is a first-in-class intervention that is currently being evaluated for safety and tolerability in a subpopulation of PD subjects. Axial’s PD program has also identified multiple novel chemical entities in the AB-4000 series, which are being developed to have improved selectivity as potential next-generation drug candidates for PD and other neurodegenerative diseases.

We recently announced (June 20, 2019) a $10M investment from Taiho Ventures to access Axial’s expertise in the GBA. This $10M investment — as a Series B extension — brings the total amount raised in our Series B financing to $35M.

Axial is collaborating with the Parkinson’s Institute and Clinical Center (PICC) on preclinical research using our candidates and the PICC’s unique cellular and animal models for PD.

Paradigm Shift in Treatment of Autism 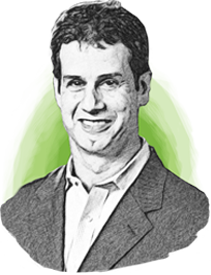 David H. Donabedian, PhD, MBA, is co-founder and CEO of Boston-based Axial Biotherapeutics. Since Axial’s launch in November 2016, David has raised significant capital from top-tier VCs, assembled a renowned advisory and scientific board and established the company as a leader in the gut-brain-axis. David holds a BA in chemistry from St. Anselm College, a Ph.D. in polymer chemistry from the University of Massachusetts Lowell, and an MBA from the University of North Carolina.