For the first time in gene therapy history, CRISPR-Cas9 genome editing technology will be used in humans in an in vivo clinical trial in the Boston area that is set to be led by Editas Medicine and partner Allergan. Currently, the phase I/II trial called BRILLIANCE is designed to include 18 patients with a genetic form of blindness known as Leber’s congenital amaurosis 10 (LCA10), which is the most common cause of inherited childhood blindness and occurs in about two to three of every 100,000 births.

While this news is exciting and signifies another scientific stride in our modern day of medicine, it also kicks up questions and concerns. Although the BRILLIANCE trial will use a type of gene editing that will not replicate in offspring (only somatic cells will be targeted — not germline cells), the entire therapeutic approach is still very new. Only a few months ago, cancer patients were treated with CRISPR in a combination therapy with CAR-T therapy at the University of Pennsylvania.

Let’s take a closer look at CRISPR-Cas9 to understand its promising benefits as well as the potential challenges it may bring to clinical studies using this innovative technology.

Harnessing the Power of Bacteria Defense Against Viruses

CRISPRs are clustered regularly interspaced short palindromic repeats, and CAS are CRISPR-associated (Cas) enzymes. Both have essential functions in defense systems in some bacteria and archaea. CRISPR-Cas9 technology was adapted from this naturally occurring form of genome editing, in which CRISPR spacer sequences — incorporated following virus attack as DNA segments identical to parts of the virus genome — are transcribed into short CRISPR RNAs (crRNAs) to be used for sequence-specific detection and silencing. This alters the bacteria’s resistance to that particular virus by making it able to recognize and target the virus’ DNA if it attacks again. The Cas9 protein binds to the cRNA and a separate trans-activating cRNA (tracrRNA), which guides it to the target site to cleave the invading DNA and thus destroy the virus. As evidenced from the bacteria immune system, organisms need more than antibodies to defend themselves very efficiently.

In the lab, the CRISPR-Cas9 system works similarly by creating a guide RNA to bind to a specific sequence of DNA in a genome. The Cas9 enzyme binds to and is guided by this RNA to the target DNA sequence to be edited, which Cas9 then precisely cuts. At that point, the cell can repair the DNA on its own, by non-homologous end-joining (NHEJ), adding or deleting pieces of genetic material, or by homology-driven repair (HDR), where a new DNA sequence is inserted to correct the mutation causing the disease.

Gene editing is different from the more “classical” gene therapy, where functional copies of an entire gene are delivered to the cells to replace the defective copies or substitute for the missing ones. With CRISPR-Cas9 gene editing, only the mutated region of the gene is corrected. This makes the gene-editing approach particularly desirable when gene therapy is not feasible because the replacement gene is large — like CEP290, which is targeted in the BRILLIANCE study — and exceeds the capacity of commonly used viral gene delivery systems.

The BRILLANCE study is a major step forward for CRISPR gene editing, and there is much potential for its use, particularly in many in vivo applications.

Understanding that the Cas9 protein originates from bacteria, we can better assess the potential risks of CRISPR-Cas9 technology. Depending on the assay used, anti-Cas9 antibodies have been found to be present in 20–80% of individuals. This comes as no surprise, since the most common orthologs of Cas9 are derived from Staphylococcus aureus (SaCas9) and Streptococcus pyogenes (SpCas9), which are two common pathogens that humans encounter. Both antibody- and T cell–mediated immunity against Cas9 in healthy individuals have been described, and while several published papers report varied outcomes,1–4 they all point to the conclusion that anti-Cas9 immunity needs to be assessed as part of the gene therapy development process.

It is important to remember that, while the existence of anti-Cas9 antibodies indicates that the immune system has previously been exposed to intracellular bacterial proteins, they may not necessarily mean that the efficacy of Cas9-mediated gene editing will be compromised. However, understanding their prevalence and potential neutralizing effect will be critical as part of the risk–benefit analyses for individual patients, as the impact of preexisting immunity can range from no clinical effect to decreased treatment efficacy to severe adverse reactions. For example, in the case of in vivo gene delivery, Cas9 is expressed intracellularly without direct exposure to circulating pre-existing anti-Cas9 antibodies — but their presence could suggest that a patient may have memory T and B lymphocytes capable of mounting an adaptive immune response to cells expressing Cas9 protein. A recent study showed that anti-Cas9 T cells can react to Cas9 in circulation, generating cytotoxic T lymphocytes (CTLs) that can destroy infected host cells.5 The study also notes that in vivo gene editing typically uses viral vectors that lead to long-term expression and are more likely to mediate an immune response to Cas9 following therapy.

Implications for In Vivo Gene Editing

It is important to note that research around in vivo use of CRISPR-Cas9 is still nascent, as the technology itself is recent and evolving. Still, the BRILLANCE study is a major step forward for CRISPR gene editing, and there is much potential for its use, particularly in many in vivo applications. Ensuring the efficacy and safety of gene therapies based on CRISPR-Cas9 gene-editing tools will require careful evaluation of the prevalence of pre-existing antibodies to Cas9 and monitoring for anti-Cas9 antibodies throughout clinical development and after drug approval — combined with careful consideration of vector used, route of administration, and other factors critical to assessing the full immunogenic profile of any gene therapy candidate. 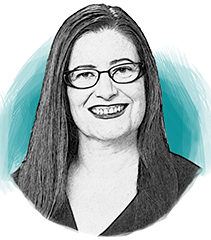 Dr. Lydia Michaut holds a master’s degree in molecular and cellular biology and a Ph.D. in immunology from the University of Strasbourg and has 15 years of experience in fundamental research directly contributing important work in Balzan Prize- and Nobel Prize-winning academic laboratories. She then spent 10 years at Novartis, where she acquired a deep expertise of clinical regulated bioanalytics supporting PK, PD, and immunogenicity assessments of large molecule therapeutics, including gene therapies, before joining BioAgilytix in early 2019.