Advances in our understanding of enzymatic transformations and the increased availability of enzymes engineered for use in fine chemical synthesis is making biocatalysis attractive for the production of chiral pharmaceutical intermediates and APIs. SEQENS is leveraging its expertise in chemo- and biocatalysis to identify cost-effective routes to increasingly complex small molecule drug substances with chiral centers.

The Importance of Chirality

Chirality is a fundamental property of organic molecules that contain asymmetric carbon atoms with four distinct binding groups, which can exist as paired stereoisomers — known as enantiomers — that form mirror images of one another. These enantiomers are often referred to as right- and left-handed. They not only rotate polarized light in opposite directions, they exhibit very different interactions with other chiral molecules.

Small molecule active pharmaceutical ingredients are also typically chiral, and classical production methods result in mixtures of paired enantiomers. Given that target molecules are homochiral, the two enantiomeric forms of a chiral API could exhibit different pharmacokinetic and pharmacodynamic behaviors — and different efficacies and toxicities. It is also possible for one enantiomer to be bioactive and the other not, or, in the most extreme cases, for one enantiomer to provide a therapeutic effect while the other is highly toxic. In some cases, the members of an enantiomer pair have been found to be effective in the treatment of very different diseases.

Regulatory agencies do not require the development of chiral drugs as single enantiomers. Both the U.S. Food and Drug Administration (FDA) and the European Medicines Agency (EMA), however, require pharmaceutical companies to comprehensively evaluate the properties of each enantiomer individually as well as the racemic (50:50) mixture of a chiral API.

Small molecule drug candidates in the pipeline today are becoming more complex. It is common for an API under development today to have multiple chiral centers. The increasing complexity has driven the need for new approaches to obtaining chirally pure enantiomers. When pharmaceutical chemists first began developing routes for the preparation of single enantiomers of chiral APIs, they largely relied on separation technologies. The API was synthesized as a racemic mixture, and then the desired enantiomer was separated from the undesired one.

This approach has several disadvantages. It is often difficult to separate two enantiomers from one another. In many cases, the desired isomer remains contaminated with the undesired molecule. Even if an effective method is developed, the remaining enantiomer — often a very expensive material — becomes a waste product. As a result, this approach involves a significant waste of time and resources and is therefore very costly.

To avoid these problems, chemists began seeking methods for the selective production of single enantiomers of chiral molecules — and, to do so, they turned to catalysis. Catalysts mediate complex transformations but do not take part in them. Specially designed catalysts can mediate asymmetric transformations that result in the formation of several bonds and chiral centers, all in one step.

As an example, compared with kinetic resolutions of racemic mixtures, enzymatic desymmetrizations of meso compounds allow the synthesis of chiral derivatives with a 100% theoretical yield.

After screening Protéus’s enzyme portfolio, a hit was identified allowing the transformation of the prochiral diester with very high enanselectivity (> 99% ee). Moreover, the kinetic and thermodynamic analysis was further addressed for shedding insights into the desymmetrization process. The full R-baclofen process was then scaled-up at SEQENS’s R&D center based in Porcheville.

Furthermore, SEQENS has developed an enzymatic process for manufacturing d-serine product on a multiton scale; both productivity and high enantioselectivity were achieved (Fig. 1B). Protéus by SEQENS has developed its own enzyme library, with more than 300 enzymes available off-the-shelf.

Synthetic chemists have the choice of using chemo- or biocatalysts. Chemocatalysts typically are transition-metal complexes with complicated structures designed to bind in specific ways to specific substrates to achieve a desired and highly selective transformation. While most are designed to perform homogenous catalysis in solution, heterogeneous catalysts are also available. Often, there are several choices of chemocatalysts for mediating a certain type of reaction.

Like chemocatalysts, biocatalysts are designed to perform highly selective and specific chemistry, but can be composed of engineered enzymes. They have the advantage of being heavy metal free, and thus do not require the removal of metal impurities after completion of a reaction. Consistent with the homochirality of biomolecules, the reactions catalyzed by enzymes generally exhibit high stereo- and regioselectivities, generating products highly enriched for single enantiomers. Additionally, biocatalysts are highly efficient, allowing catalysis to be performed under mild reaction conditions, with reduced energy consumption and greenhouse gas emissions in comparison to chemical catalysis. Enzymatic reactions are also generally performed in water rather than organic solvents.

In addition to being used to replace chemocatalysts in straightforward asymmetric reactions, biocatalysis can sometimes be used to complete chiral transformations with significantly fewer steps. Typically, for molecules with more than one of the same type of functional group, chemocatalysts often do not selectively interact with just one of those groups. The others must first be protected, and then, after the asymmetric transformation is completed, be deprotected — potentially adding multiple steps to a synthetic route. In many cases, enzymes have the capability to selectively convert one of many similar functional groups in a molecule, reducing the overall process steps, time and cost.

There are also cases where enzymes are able to achieve transformations that cannot be performed effectively — or at all — using classical chemical methods or chemocatalysts. In many cases, biocatalysts can mediate complex transformations that generate complex intermediates or APIs with multiple chiral centers. Here, biocatalysis affords access to novel structures and can potentially have significant impacts on manufacturing time and cost.

In general, chemocatalysis and biocatalysis are complementary. Having expertise in both methodologies increases the likelihood of identifying the shortest, most efficient and cost-effective route to complex pharmaceutical compounds. The choice of catalytic technique will depend on the target molecule, the availability of different catalysts at industrial scale, the ability to develop appropriate analytical methods and, of course, cost. It is also important to remember that, in some cases, the same intermediate may not be used in a classical chemical synthesis route, as would be required for biocatalysis due to the different selectivities of certain enzymatic reactions.

While in some cases these off-the-shelf enzymes provide the required level of performance in terms of yield and selectivity for the desired isomer, it is often the case that some optimization is necessary for a specific transformation.

Building a comprehensive toolbox of biocatalysts is now possible due to significant advances in enzyme engineering technologies. Until recently, the number of enzymes suitable for use in the pharmaceutical industry (and available at industrial scale) was limited. In addition, the engineering of enzymes tailored to achieve a specific chiral transformation with high yield and selectivity was a lengthy process. Today, however, many different biocatalysts are available off-the shelf, and the development of customized enzymes can be achieved rapidly.

In the late 1980s, most enzymes used in the pharmaceutical industry at industrial scale were hydrolases, and most commonly lipases. These enzymes mediated the selective hydrolysis of esters. Since the 2000s, however, many additional types of biocatalysis have become available for pharmaceutical manufacturing, including nitrilases, transaminases, acyltransferases, epoxide hydrolases, ketoreductases and iminereductases, among others. The armentarium of commercially available enzymes continues to expand almost on a daily basis.

This growing array of enzyme choices allows route development chemists to consider multiple synthetic strategies and identify the best route possible. Evaluation of technical and cost considerations for the multitude of chemo- and biocatalysts available for achieving complex, yet highly stereoselective transformations helps determine the most appropriate methods for each step in an overall synthesis.

While in some cases these off-the-shelf enzymes provide the required level of performance in terms of yield and selectivity for the desired isomer, it is often the case that some optimization is necessary for a specific transformation. Given the numerous advances in rapid genome sequencing, site-specific mutagenesis, directed evolution, computational tools and other techniques, it is now possible to rapidly and efficiently engineer robust enzymes with tailored biocatalytic activity.

The key question becomes one of lead time. If an off-the-shelf enzyme is suitable, then lead times are no different than those for purchasing other key raw materials. If an enzyme must be engineered, the lead time will be longer; once the engineering is completed, the enzyme must be produced — typically via fermentation — and downstream processed. Procedures and analytical methods must be developed to ensure that residues linked to enzyme production are purged from the catalyst.

At SEQENS, we are ideally positioned to bring together extensive expertise in enzymatic technologies and pharmaceutical route development. We have experience developing optimized enzymes for specific transformations and can even produce immobilized biocatalysts if appropriate.

SEQENS was formed in December 2018 when Novacap took over Uetikon, PCAS, including Protéus and PCI Synthesis. With 24 manufacturing plants and three R&D centers in Europe, North America and Asia, we are an integrated global leader in pharmaceutical synthesis and specialty ingredients.

Our greatest expertise lies in developing and producing highly complex molecules using a unique skillset and a very broad continuum of technologies that encompasses both chemo- and biocatalysis. At SEQENS, we are ideally positioned to bring together extensive expertise in enzymatic technologies and synthetic route development. We have experience developing optimized enzymes for specific transformations and can even produce immobilized biocatalysts if appropriate.

As a one-stop shop, we provide support to clients from the lab and exploratory stages through route design, process development and scale-up to clinical manufacturing and commercial production for all types of APIs, including complex chiral molecules. We can produce intermediates in our non-GMP facilities and clinical and commercial materials at our GMP sites using our integrated capabilities for asymmetric synthesis and processing.

The ability to produce raw materials, intermediates and APIs within one company ensures that we develop the most cost-competitive synthetic strategies for chiral APIs, which may not be possible if raw materials and intermediates are purchased from external sources. Our in-house catalyst teams at both our non-GMP and GMP sites collaborate to identify the best synthetic routes and develop processes that are practical for implementation at commercial scale.

In addition, with respect to biocatalysis, which is still a newer technology in the pharma industry, our process development, engineering, production, analytical and regulatory groups collaborate and share their knowledge and understanding to rapidly and efficiently develop optimized, compliant manufacturing processes. The experience we have gained over the last several years, working on many different projects, gives us a real competitive advantage and directly benefits our customers. 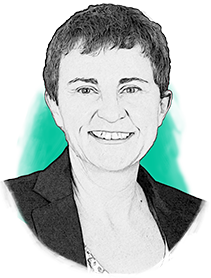 After completing her Ph.D. in organic synthesis at the University of Caen (France), Juliette conducted an industrial postdoctoral fellowship in asymmetric chemocatalysis at Zeneca Life Science Molecules in the UK. In 1999, she joined Avecia (UK) as R&D Team Manager focusing on New Technology Platforms involving chemo- and biocatalysis. In 2006, she joined SEQENS once the new joint venture was created with the biotech company Protéus (France). In 2009, she became R&D Manager focusing on some key technologies in process development. She then became Head of Biocatalysis for Pharma Synthesis. In 2012, she was appointed General Manager of Protéus.