Mammalian cell culture is widely used for biologic drug substance production, but the high cost and long development times pose challenges to the implementation of this technology in many parts of the world. Traditional protein expression systems are also often not optimal for the novel biomolecules under development today; however, plant-based expression systems can overcome many of these shortcomings.

Therapeutic proteins have been produced in plant-based expression systems for more than 20 years. Human trials were first conducted in the late 1990s for an experimental cancer therapeutic and an antibody for the prevention of tooth decay. Since then, various antibodies, vaccines, enzyme therapies and other therapeutic proteins developed by iBio and other companies, such as Protalix BioTherapeutics, Medicago, Icon Genetics and Mapp Biopharmaceuticals, have reached clinical trials and, in some cases, achieved regulatory approval.

Despite the many advances made in recent years with mammalian cell culture upstream processing, important fundamental challenges remain with CHO-based systems, including long product and facility development timelines and high capital expenditure requirements for bioprocess trains and buildings. Even in instances where single-use systems (SUS) are deployed to reduce costs and timelines associated with stainless steel bioprocessing, there are significant unfavorable associated environmental impacts. Expression levels can also be low for the next-generation biologic drug substances in the pipeline. Some newer therapeutic proteins cannot be produced at all in existing mammalian, bacterial, fungal or insect cell systems.

Unlike traditional mammalian cell culture, plant-based transient protein expression systems typically do not require identification, isolation and development of optimal high-producing cell lines to enable large-scale production. There is also no need to invest in the large-scale production equipment or highly skilled labor required for commercial cell culture processes. Scale-up is simpler, too — all it requires is growing more plants rather than switching to larger bioreactors, which can impact processes and potentially cause delays and higher costs. Furthermore, since no animal-derived materials are used, there is no risk of contamination by adventitious viral agents or other undesired pathogens, and expensive aseptic liquid-handling process steps can be avoided.

iBio employs Nicotiana benthamiana, a relative of the common tobacco plant, for its protein-expression platform. The system takes advantage of two gene expression components in the proprietary expression vectors. The first expression cassette is derived from a plasmid carried by Agrobacterium tumifaciens and allows for the efficient transfer of DNA to the nucleus of plant cells and expression of downstream genes. The second expression component is derived from tobacco mosaic virus or other plant viruses and drives runaway expression of the desired protein product in the plant cell’s cytoplasm. The plants grow rapidly and contain little nicotine. In addition, N. benthamiana supports replication of a wide range of viruses, which is advantageous when it is necessary to express multiple genes in the same cell.

The third-generation iBio platform uses green plants grown hydroponically in a vertical stack system under artificial lighting. After about five weeks of growth, the plants have generated sufficient biomass to enter the transient expression process. The plants are removed from the growth stacks in pallet-sized trays and inverted into a solution of Agrobacterium containing the appropriate expression vector. The racks of plants are then exposed to a mild vacuum, which draws gas from the plant leaves. Upon release of the vacuum, the plants replace the missing gas with the Agrobacterium solution, initiating the gene transfer process to first the nucleus and subsequently the cytoplasm of every leaf cell in the plant. Translation of these recombinant viral vector mRNAs can result in the accumulation of gram quantities of target protein in the plant leaves per kilogram of fresh plant tissue (up to 20–30% of total soluble protein) in less than a week.

The plant biomass is then harvested, homogenized, and clarified to produce an extract containing the protein of interest. Proteins are further purified as required using conventional separation and chromatography steps widely used in the biopharmaceutical industry.

This transient expression system is highly flexible and has been used for the expression of vaccine antigens (including virus-like particles), antibodies, fusion proteins, interferons and cytokines, growth factors, protease inhibitors, clotting factors, enzymes for replacement therapy (specifically alpha-galactosidase A) and other products that cannot be produced using conventional expression systems.

The iBio manufacturing facility in Bryan, Texas is also designed to be highly sustainable. All gray water from the manufacturing process is recycled, and the lights used for growing the plants are highly efficient, using spectrum-calibrated LEDs that generate only the wavelengths of light required by the plants.

Until the plants are infiltrated with agrobacteria containing a specific viral vector, they are considered raw materials. They are kept in a separate area of the facility and are rigorously assessed for quality before entering the manufacturing process. All process development, purification, fill/finish and analytical operations take place in portable PODs from G-CON, physically independent rooms with individual utilities allowing the simultaneous completion of multiple independent projects. It takes just one week to completely clean and sterilize the facility to prepare for a new campaign. Parallel processes can proceed simultaneously at different scales (R&D, pilot, full factory).

Given the speed of its plant bioprocessing technology, iBio can complete a feasibility study for clients in just weeks and provide 100 mg of protein
for testing.

Seamless scale-up is achieved by growing additional plants in numbers consistent with the scaling factor, with no concerns about scaling causing changes in protein structure, quality, yield or posttranslational modifications (PTMs), further accelerating product development. It is thus possible to reduce the time to IND filing by six months or more compared with CHO-based systems.

In collaboration with a group at UC Davis, a techno-economic analysis of plant-based protein manufacturing was performed using metrics derived from the iBio Texas facility.1 The existing iBio facility, which was built in 10 months for $60 million in 2010, could be built today for ~$150 million, while a typical CHO facility would cost >$300 million. As a result, the cost of goods (COGS) for a mAb produced by iBio is comparable to published COGS values for mAbs produced using CHO systems. 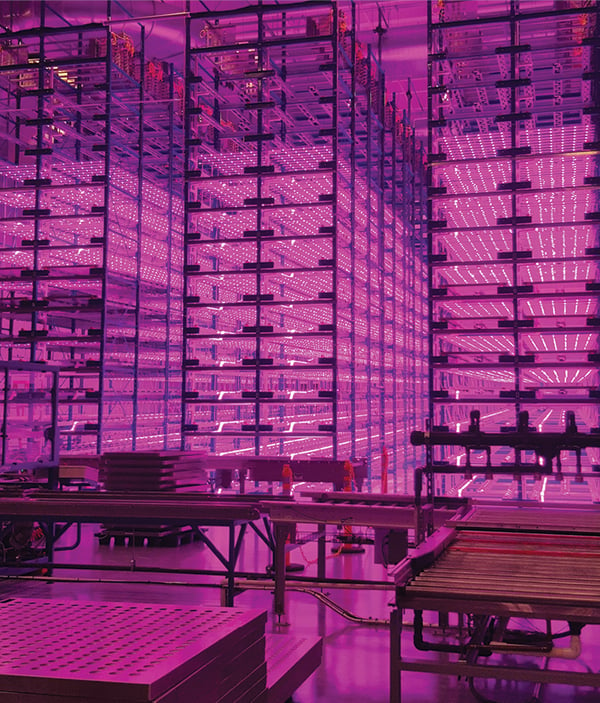 iBio’s Texas facility has a current capacity of approximately 3,500 kg of biomass per week, which can be doubled to 7,000 kg of biomass per week by building out an additional grow room.2 Proteins can be produced at any scale: material obtained from one plant through lab and GMP-pilot scales to commercial quantities (100–150 kg of purified mAb per year, which can also be doubled). Given the speed of its plant bioprocessing technology, iBio can complete a feasibility study for clients in just weeks and provide 100 mg of protein for testing.

All equipment is in a constant state of readiness, fully commissioned and ready for scale-up cGMP activities as needed. All of the purification equipment, which is located in G-CON cleanrooms, has been sized to accommodate the doubling of protein expression capabilities.

In addition to cloning the necessary vectors, biomass production and protein extraction and purification, iBio also supports clients with buffer exchange, formulation and both automated and manual sterile fill and finish activities (hundreds to thousands of vials for early stage clinical trials and stability testing). Our sophisticated synthetic biology tools allow for the modification of DNA, protein sequences and protein structures to create patentable product candidates with improved function, stability, potency and other desirable characteristics.

Process development services include proprietary approaches to improved gene expression through codon optimization and significant know-how to eliminate protease activity and improve unit process yields. The use of a quality-by-design approach ensures the development of robust processes with high and reproducible product quality.

Experienced analytical staff provides method development and validation support as part of projects and on an ad hoc basis, with special capabilities in protein characterization using mass spectrometry. A partnership between iBio and regulatory consultant CBR International (which has 20 years of experience in plant-based protein manufacturing) ensures successful regulatory filing. For clients that wish to build and operate their own facilities, iBio will transfer the technology.

iBio would like to support both early stage biotech and large pharma companies, as well as universities, spinouts and government agencies. The simplicity of the technology makes it well suited for implementation in areas of the world where capital and a highly skilled biopharmaceutical workforce are in short supply. The short development timeline also makes it attractive for the development of drugs and vaccines in response to pandemics.

iBio is particularly interested in supporting drug development activities in emerging markets. Bio-Manguinhos/Fiocruz, the technical/scientific unit of the Oswaldo Cruz Foundation (Fiocruz), is employing iBio’s technology in a planned plant-based multipurpose biopharmaceutical and vaccine manufacturing facility in Brazil for the low-cost production of a novel yellow fever vaccine.

AzarGen Biotechnologies, an early stage pharma company in South Africa, is moving a biosimilar rituximab targeted for non-Hodgkin’s lymphoma initially developed by iBio toward preclinical testing. The company rapidly evaluated several candidates, developed a process, conducted an early stage risk assessment and developed a regulatory path. It is ready to produce material for preclinical studies and the preparation of a pre-IND package for FDA. The plant-based expression technology provides the only economically viable platform for the production of this biosimilar in South Africa. 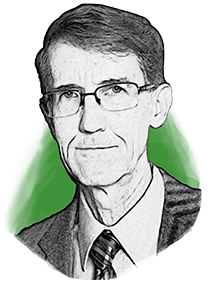 Robert Erwin has been President of iBio, Inc. since 2008. He previously was Managing Director of Bio-Strategic Directors, CEO of Large Scale Biology Corporation, and Chairman of Icon Genetics AG. He is currently Chairman of Novici Biotech and a Director of Oryn Therapeutics. He was a member of the Cancer Policy Forum of the Institute of Medicine and a clinical advisor to the California Institute for Regenerative Medicine. Mr. Erwin received B.S. and M.S. degrees in Zoology and Genetics from Louisiana State University.