There is no single issue in the pharmaceutical industry as contentious as the pricing of drugs. In the United States, in an environment of bipartisan government pressure and a great deal of coverage in the media, the industry has been tasked with reforming ethically, such that the development and commercialization of life-savings therapies can continue without pricing out those who are in need of access. The industry must innovate so that the cost burden is shared across the supply chain and no longer fully shifted to consumers and insurance companies.

Calculating the Cost of a Drug

Drug pricing is a complicated process involving many parties. The first step a company takes when determining an appropriate drug price is to estimate the size of the market for the drug in relation to the cost of the drug’s development. For instance, a drug for an extremely rare disease with a potential patient population of only 1,000 people will likely be ten times more expensive than one that can be used by 10,000 consumers, if it costs the same to develop.1

Before finalizing a drug price, companies consult with insurance companies to determine what their direct competitors are charging. For instance, the price of a new drug that performs better than the previously marketed treatment can be increased by a premium of 10–15%, on average. This is what happened with Gilead’s hepatitis C treatment Sovaldi, which entered the market with an $84,000 price tag, slightly higher than the existing hepatitis C therapies.2,3 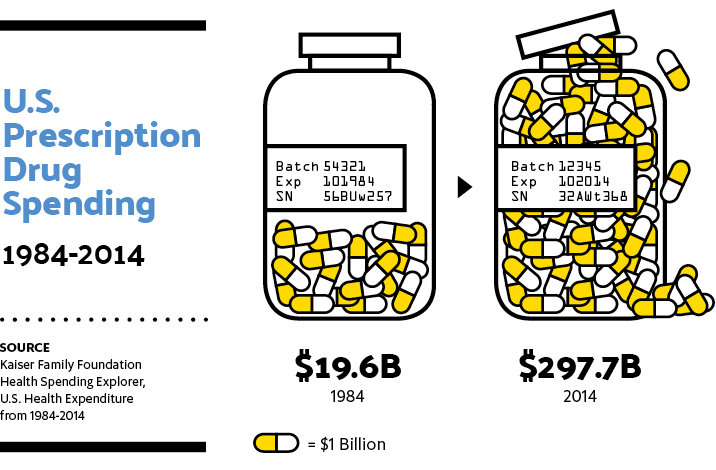 Leaving Out the Consumer

Insurance companies are the frontline in combatting drug prices.2 They set their budgets for the year in advance, before knowing what therapies will be offered or at what cost. These companies also have internal measures to keep costs low, including requiring prior authorization or making a patient take part in a step therapy system (where a patient must try other drugs before a costly therapy can be prescribed).

Although the patient is the ultimate consumer of the drug, there is little opportunity for direct patient input in the pricing process. Decisions on pricing are made by physicians, who require patients to take specific medication, and by the insurance company that determines whether the patient will be allowed access to the prescribed drug.2  Though the consumer is squeezed between insurance companies and drug companies, neither is ultimately held accountable for the consumer’s interests.

The industry must innovate so that the cost burden is shared across the supply chain and no longer fully shifted to consumers and insurance companies.

That the consumer has been effectively left out of the drug pricing process has become abundantly clear, especially over the last several years. Following a string of highly publicized issues, public perception of the pharmaceutical industry remains low across demographic groups. According to Consumer Reports, a total of 73% of Americans believe that the cost of prescription drugs is unreasonable, and, within that group, 76% feel that “greedy pharmaceutical companies” are to blame.4 These sentiments are even more acute in older Americans, who likely have greater experience with pharmaceuticals; 81% of adults aged 50 and up feel that prescription drug prices are too high, with 9 in 10 noting that the prices are so high that the government has a responsibility to act.4

Drug prices have increased so much that many consumers either compromise on dosages or go without critical medications. Approximately 20% of Americans say they have cut medication in half or skipped a dose completely due to high cost; 10% of patients prescribed a drug for multiple myeloma stopped taking it because it was too expensive; and 55% of adults over age 50 said that they did not refill a prescription because they could not afford to do so.4

Costs have only continued to increase — the average worker pays $1,318 out of pocket before their insurance company begins to cover their bills. In 2015, prescription drug spending reached $425 billion, and this number is expected to be $640 billion by 2020, according to data from IMS Health Incorporated. 4

Drug pricing has been on an upward trajectory, with several examples receiving considerable media attention. This includes the well-publicized 5000% price increase of the drug Daraprim by former Turing Pharmaceuticals (now Vyera Pharmaceuticals) CEO Martin Shkreli.5 The New York Times covered the story at the time of the hike, noting that this was not a unique phenomenon.

As an example, the article cited cycloserine, a drug for the treatment of multidrug-resistant tuberculosis, whose price increased from $500 to $10,800 for 30 pills after being acquired by Rodelis Therapeutics.5 Similarly, the antibiotic doxycycline jumped from $20 per bottle in October 2013 to $1,849 by April 2014. Likewise, Valeant Pharmaceuticals raised the price of heart drugs Isuprel and Nitropress 525% and 212%, respectively, following their acquisition from Marathon Pharmaceuticals — this prompted government intervention.5

EpiPen was among the most high-profile drug price cost increases in recent years. Mylan acquired the rights to market EpiPen, which functions as an emergency life-saving treatment for patients exposed to allergens, such as bee stings or peanut exposure, in 2007. In late 2015, its price was raised approximately 400% and jumped from $50 to over $600 for a pack of two doses.6

Though the EpiPen costs $300–600 in the United States, this is not the case everywhere. The identical drug costs $69 in the United Kingdom,8 $38 in Australia,9 and $100 in Canada.10 The varying cost of the same medication around the world is the result of a number of factors, including different national regulations. The UK, Canada and Australia ensure that all citizens are granted access to drugs by refusing to allow their sale if the price is not found to be reasonable.

The United States does not regulate drug pricing, and the FDA does not consider price during approval. As long as a drug is considered safe for human use and effective, it can be approved — even if a more cost-effective solution already exists. As a result, some therapies that are available in the United States are not available elsewhere.11

The American drug market is notably fragmented, which is a major driver of high drug prices. Because there is no universal regulatory agency that negotiates drug prices, a mosaic of insurance companies is left to deal with drug makers directly, and the result is less bargaining power and higher costs, which are then shifted to the consumer. As a result, Americans spend more on prescription drugs than citizens of any other country.11

The potential for higher profit margins in the United States means more investment from the pharmaceutical industry, and an influx of capital means innovative treatments are more likely to originate in the national market. Once a therapy is created and tested, patients internationally eventually reap the benefits — meaning that the United States is effectively funding drug development on an international scale.

According to a Kaiser Health Tracking Poll, the majority of Americans (83%) believe that the government should negotiate with drug companies to lower prices and to lower costs for those with Medicare. Similarly, 76% believe that drug companies should put limitations on pricing for drugs that treat illnesses such as hepatitis or cancer. Until national pricing issues are resolved, 72% feel that Americans should be able to buy prescription drugs imported from Canada.12

A Call to Action

The public outcry over drug costs has prompted government intervention, though few results are apparent thus far. President Trump proposed that drug companies show their prices on television ads, as a way to encourage transparency and begin pricing reform. Ezekiel Emanuel, chair of the Department of Medical Ethics and Health Policy at the University of Pennsylvania, penned a reaction to this, noting the paradoxical nature of the change.

Emanuel wrote, “Putting list prices on TV ads will not lower drug prices. And it may have some troublesome side effects. It also lacks an enforcement mechanism, such as steep fines. How is showing drugs’ list prices supposed to work? Part of the Trump administration’s theory seems to be that by shaming drug companies they might lower their prices. But nothing seems to shame them. Indeed, after all the uproar over $600 EpiPens, EpiPens are, well, still $600.”13 A related concern is this proposal will actually confuse audiences, since the actual cost of drugs is individualized and depends on insurance coverage. A high drug price seen on TV may deter those in need of treatment, instead of encouraging it. 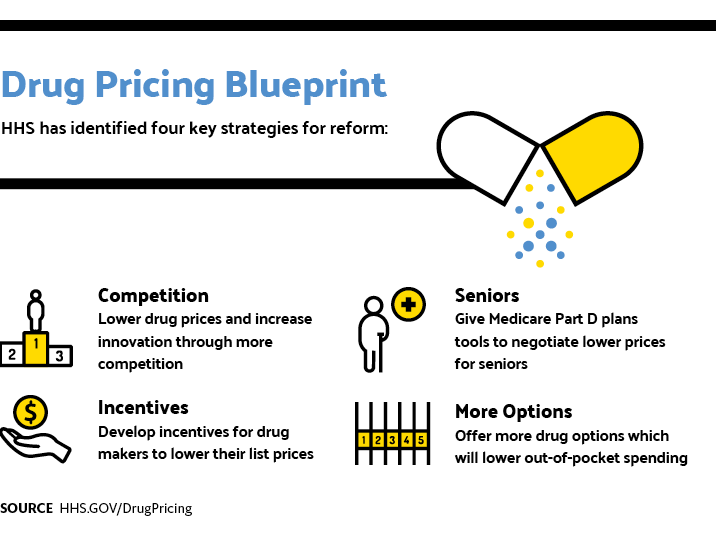 The answer for fixing pharmaceutical pricing may be generics, and the FDA has been outspoken in their support of generic alternatives. In December, Commissioner Scott Gottlieb and Director of the FDA’s Center for Drug Evaluation and Research Janet Woodcock released a statement on modernizing the packaging and labeling of generic medicines.14 “When looking at the broader impact of our regulations, the agency must weigh and balance the potential impact of our actions especially as it pertains to consumer access to high-quality, lower-cost generic medicines. These are matters of public health concern. One such issue the FDA has considered extensively over the past few years is the process by which drug companies update drug labels and communicate safety-related information for generic drugs,” read the announcement.14

Internalizing a Pathway to Reform

Aside from creating subsidies for the production of generic alternatives, mandating price regulations and negotiations seem like inevitable next steps in drug pricing reform. However, pharma must also find ways to maximize bottom lines without raising drug prices beyond what is considered reasonable. One pathway to reform may be through optimizing manufacturing practices, including transitioning to continuous operations. Increasing productivity and reducing overcapacity will be crucial going forward.15 This may be achieved with greater reliance on outsourcing to contract development and manufacturing organizations, simplifying the supply chain, ensuring security of supply and meeting regulatory requirements at a fair price.15

If all sponsors and suppliers work together, forming strategic partnerships that allow medicines to be created and moved along the supply chain, reducing inefficiency — and if the responsibility for profits and margins is re-evaluated internally and not totally dependent on a treatment’s high cost — we can come closer to making life-saving treatments available at fair prices.

Ultimately, the responsibility to maintain ethical practices is as much up to the pharma industry as the government — the industry must look inwards and view access to medicines in the same regard as innovation. After all, if our medicines do not reach the intended consumers, how can we quantify our work? Ethical responsibility begins at the molecule and must be upheld from start to finish.

Wearable Technology: Their Future in Clinical Trials and the Real World