The Innovation Issue Feature: The Future of Healthcare (Part 2) 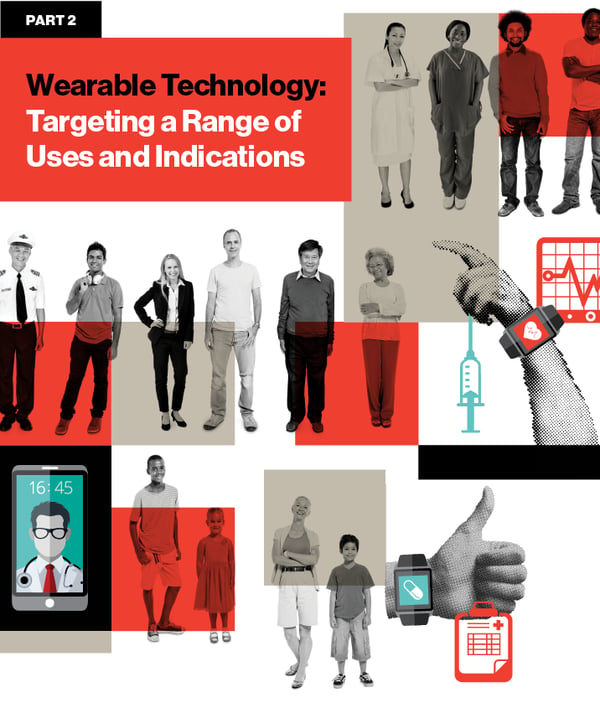 As tech companies compete to bring game-changing devices to market, it remains unclear which types of wearable devices will become the gold standard in healthcare. While there are countless products in development or already available for consumer purchase, there remains a steep learning curve for consumers and health professionals alike, and choices for wearable devices in terms of features, practical usability, and value remain uncertain. However, for improving health, maintaining health, or managing chronic conditions, there is likely a device on the market that can make life better for many, or at least make one’s body less mysterious.

Wrist wearables like smartwatches and fitness trackers have the deepest market penetration. Devices from Fitbit, Apple, Garmin, Polar, and Suunto, among others, all have the ability to track important metrics like heart rate, distance walked or run, and calories burned. For most consumers, purchasing decisions are made on the basis of how they will interact with their wristwear, as well the best option for connecting to other devices they own. Beyond smartwatches and fitness trackers, there is no shortage of innovative wearables designed to help users stay informed and motivated to maintain their health.

Diabetes is a major health issue in the United States and the seventh leading cause of death.1 Over 34 million people in the United States have diabetes, and one in five who have it are unaware of their condition.1 Additionally, more than 88 million U.S. adults have prediabetes, which increases the risk for type 2 diabetes, heart disease, and stroke, and over 80% of people with prediabetes are unaware of their condition.1 Australian start-up Nutromics is developing a Smart Patch device that combines sensors and stretchable electronics that attach to the skin on a user’s arm. The patch tracks a user’s health at a molecular level by measuring dietary biomarkers — biochemical indicators of dietary intake and nutritional status. The patch allows for a noninvasive and painless assessment that connects to an app allowing users to see how their bodies respond to various foods. By suggesting dietary modifications, it helps users reduce their risk for lifestyle-related diseases.

The V-Go Insulin patch is a 24-hour, patch-like wearable that delivers insulin. It features regular human insulin (RHI) in the patch, which has been found in at least one clinical trial to be just as effective and safe as the more modern rapid-acting insulin (RAI).1 While RHI takes longer to reach the bloodstream, researchers found that using V-Go with RHI conferred similar blood-glucose control as the more expensive RAI counterpart.

A smart contact lens is in development by Pohang University of Science and Technology (POSTECH) to track glucose levels in diabetics. The wireless lenses remotely monitor sugar levels and can directly dispense medicine into the eye’s membrane. This technology could provide an alternative to more invasive blood tests for diabetes, as it uses chip technology to track glucose levels through blood vessels behind the eyelid. It can also dispense medicine to treat diabetic retinopathy.

A watch-like device from Apollo Neuroscience, Inc. can be worn on either the wrist or ankle and uses gentle vibrations to help the body respond positively to stress. Developed by neuroscientists and physicians, it utilizes inaudible sound waves to change mindfulness and mood through sensory touch. Early adopters include doctors, patients, athletes, and those dealing with chronic stress, but Apollo Neuroscience aims to use this as a holistic alternative to mental health treatments that use prescription drugs. Apollo has a coordinated data-monitoring app for iOS and Android phones with seven different modes so users can achieve different goals by relaxing the body, clearing the mind, and restoring natural balance.

Another device aimed at reducing and managing stress, called PIP, is a tiny device designed to provide immediate feedback about stress levels. Its smartphone app helps users calm down through active relaxation, having users focus on various calming visual scenes. Users hold the PIP device between the thumb and index fingers to measure skin conductivity, and the app provides feedback on fluctuating stress levels throughout the exercises.

A wearable smart band created by the Instituto Italiano di Tecnologia research institute, affectionately named “iFeel-You,” notifies users when their body temperature is higher than normal and when they get too close to someone else. It issues alerts when the wearer’s temperature is above 37.5 °C (99.5 °F), with a sensitivity of 0.2 °C, allowing for quick identification of one of the main symptoms of COVID-19. The wristband reads the movement of the human body and releases radio signals to retrieve the distance from another bracelet. If two bands are too close, they vibrate and alert the users.

Researchers at Northwestern University have developed a patch designed to be placed at the dip on the base of a user’s neck that can measure temperature, heart rate, body motions, chest wall movements, and respiratory sounds that indicate a cough.

Hackensack Meridian Health and Maimonides Medical Center are collaborating with Nanowear to test a cloth-based wearable technology called SimpleSENSE to track COVID-19 patients’ conditions. The wearable contains nanosensors that can detect physiological and biomarker changes that may indicate that a patient’s condition is worsening and alert hospital staff accordingly. Physicians can also use the wearable to remotely track patients’ vital signs, including temperature, respiration and lung volume, and blood pressure. The wearable is able to collect 120 million data points per day for each patient and then transmit that data to clinical staff.2

As the world continues to adjust to life during the COVID-19 pandemic, companies will undoubtedly continue to innovate solutions to reduce its spread, monitor biometrics, and perform contact tracing. 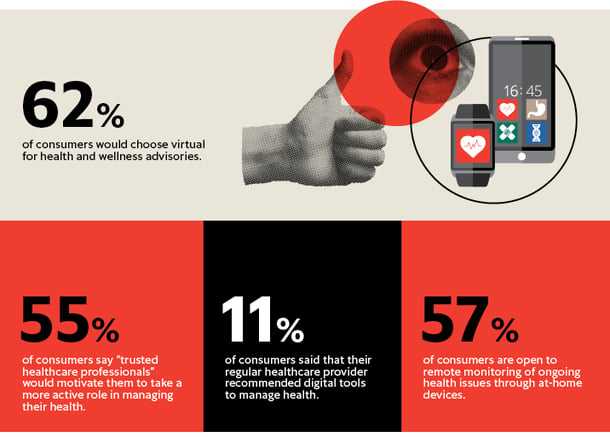 The Withings smart blood pressure monitor consists of a wearable armband connected via Bluetooth to a smartphone app. The app measures heart rate and blood pressure and also counts weekly steps. The monitor features the ability to take three measurements and report the average, which is consistent with medical recommendations. Users can also set up reminders for various issues, including taking medications.

California Institute of Technology’s professor Wei Gao developed an electronic skin that is applied to real skin with sensors that track data like heart rate, body temperature, blood sugar, and nerve signals. While most wearables use batteries, this e-skin runs on biofuel cells powered by sweat. The biofuel cells absorb lactate contained in sweat and combines it with oxygen from the environment to generate water and pyruvate. The fuel cells generate enough electricity to power the sensors and a Bluetooth device to wirelessly transmit the data.

AliveCor’s FDA-cleared personal ECG takes medical-grade ECG recordings (detecting AF, bradycardia, tachycardia or normal heart rhythm) in just 30 seconds and delivers the results to a user’s smartphone. This data can be tracked over time and shared with medical professionals for instant review. Users need only to put their fingers on the sensors to measure and record results. The firm announced a partnership with Huami smartwatches, in hopes of making its heart healthcare platform a feature of the wearables of the future.

TempTraq monitors temperature for babies and children during an illness without interruption while they rest. It includes a Bluetooth sensor as a soft patch that can be placed under the child’s arm, allowing parents keep a watch without having to take their temperature at different intervals in a day/night. The wearable is highly accurate and measures temperatures between 87.0 and 109.3 °F. Moreover, it has been tested to meet the ASTM E1112-00 standard, which is required for all the clinical digital thermometers.3

Researchers in China have developed ATMOBULE — a mask that purifies air particles using noiseless fans. The mask uses two fans to pull air through interchangeable HEPA filters that attach to the mask and can be used for over 150 hours, which is substantially longer than the commonly used N95 mask. The HEPA filters out 99.97% of air particles and generates air pressure inside the mask that is greater than the pressure outside, keeping contaminants out. The fans push purified air into the mask, allowing for normal breathing. It also features a silicone rim as an airtight seal to prevent air leaks.

BioScarf is a trendy alternative to standard air pollution masks. Beyond its stylish appeal, it is designed for individuals who want to protect themselves from potential respiratory health issues. A built-in N95 filter in the scarf helps strain over 99.75% of airborne pollutants, including pet dander, pollen, smoke, PM2.5, and other contaminants, offering protection against streptococcus, influenza, pneumonia, and tuberculosis.

Ebb Therapeutics debuted a headband featuring its PrecisionCool Technology to target sleeplessness. It uses an intelligent cooling algorithm to cool the forehead, reducing metabolic activity in the frontal cortex. This reduction of brain activity allows users to fall asleep more easily, and an algorithm maintains an optimal temperature range throughout the night for more restorative sleep.

Philips SmartSleep is a wearable soft headband with sensors that help individuals identify their sleep needs. The wearable is also capable of producing audio tones that can help improve the depth and duration of REM sleep. A connected app logs sleep metrics and offers suggestions to improve overall sleep quality.

The AVA sleep bracelet is a night-only wearable that provides insights to women about their fertility, pregnancy, and overall health. For pregnant women, it helps track weight, sleep, and stress levels. The wearable is known for its accuracy; a clinical study at the University Hospital of Zurich concluded that the device identified an average of 5.3 fertile days per cycle with an accuracy of 89%.3

While the market landscape remains largely unpredictable, there are trends and innovations that hint at future possibilities in the wearable tech space. Exoskeletons — effectively, robotic suits that humans wear — already exist and are used by some manufacturers to help human workers perform at optimal efficiency (e.g., lifting heavy weight without injury). Hyundai Motor Group has been testing its Hyundai Vest Exoskeleton, which helps to reduce pressure on workers’ necks and backs in its factories. This tech could save money spent on worker’s compensation, rehabilitation, physical therapy, and surgical procedures.4

Wearable technology also encompasses the new wave of prosthetics and robotic limbs that are increasingly becoming more intuitive (e.g., interacting directly with the nervous system and brain signals). MIT’s Media Lab is involved in a research project that combines special amputation surgery with intuitive prosthetic development, where robot prosthetics are being designed for project volunteers to be able to operate their prosthetics via their nervous systems. If successful, intelligent prosthetics that respond to an individual’s commands more intuitively may become the norm in the future.

Read Part 3: Wearable Technology:
Their Future in Clinical Trials and the Real World

Examining the Potential of Precision/Personalized Medicine