The Relevance of Global Clinical Trials

Glocalization: Balancing Global and Local Concerns in Manufacturing and the Supply Chain

The U.S. 1962 Kefauver-Harris Amendments, which overhauled the Federal Food, Drug and Cosmetic Act, aimed to create a framework requiring drug manufacturers to scientifically prove that medication was not only safe for human consumption but also effective.2 Before this legislation, it was uncommon for a research sponsor to submit foreign clinical trial data to the U.S. Food and Drug Administration (FDA) at all.2 These amendments were a response to the widespread use of thalidomide, a sedative used to treat morning sickness in pregnant women that caused birth defects in children all over the world.2 While these regulatory mandates increased the level of scrutiny for which drug manufacturers needed to legally operate domestically, the FDA codified regulations in 1975 that permitted submission of foreign clinical studies not conducted under an investigational new drug application (IND),3 opening the door for pharmaceutical and medical device companies to conduct global research while still obtaining FDA approval. The trend toward globalization of clinical trials has increased ever since.

The overall cost savings of conducting global GCTs is substantial in comparison to holding trials in the United States and Western Europe. The savings can be attributed to a variety of factors, chief among them lower operational costs (salaries, facilities rent, documentation and training).4 Other benefits include availability of patients (more patients willing and eager to participate), faster recruitment rates/shorter timelines, fewer logistical problems (contract, bureaucratic and regulatory barriers), and the widespread adoption of ICH and Good Clinical Practice (GCP) guidelines.4 Acceptance and adherence by GCT sponsors to the ICH and GCP guidelines help ease public concerns and instill confidence in patient participants who may otherwise be leery of GCTs based on past failed studies that have hurt subjects or even resulted in death.

Over the last decade, many companies have decided to conduct GCTs in new regions across Asia, Latin America, the Middle East and Africa, where the clinical trial environments are not as mature as in North America and Western Europe.5 Many discovery-based global pharmaceutical companies aim to reduce the time lag of launches in key markets and improve patient access to new and innovative treatments. The drug-lag problem in several countries can be attributed to many causes; among them are underwhelming drug innovation and suboptimal regulatory environments around the clinical trial and drug approval processes.5 Sponsors from more innovative and technologically advanced regions can increase go-to-market speed and overall quality of new drugs in emerging markets. GCTs provide sponsors with access to untapped pools of patients, as well as early patient access to new medications that otherwise may not be available in emerging markets.5 GCTs also allow medical professionals in lesser-developed regions to gain access to more advanced technologies leading to an improvement of overall skill sets and increased knowledge. 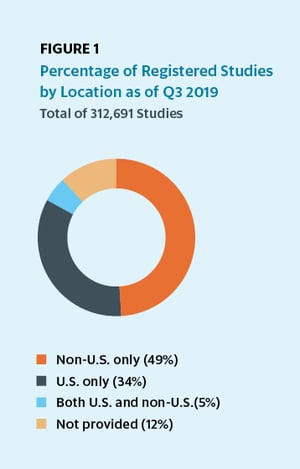 ClinicalTrials.gov currently lists 312,691 registered studies with locations in all 50 U.S. states and 209 countries, as of Q3 2019.6 The distribution of locations for all GCT sites favor GCTs occurring in non-U.S. regions, with 49% of study locations outside of the United States, compared with only 34% with U.S.-only locations.

Fig. 1 provides a visual representation of the expansive reach of GCTs occurring around the globe, showing the number of studies occurring in each region.6

Africa may represent the most significant opportunity for growth, as the African pharmaceutical market expanded to $20.8 billion in 2013 from just $4.7 billion a decade earlier.7 That growth is projected to continue to increase rapidly, with predictions ranging from $40 billion to $65 billion by 2020.7 Africa embodies many of the attributes that make foreign research so attractive. With urbanization shifting the continent’s population to emerging large cities, where GDP is growing and better infrastructure and healthcare capabilities are becoming reality, urban households have more financial resources and are quicker to adopt modern medicines.7 Between 2005 and 2012, Africa added 70,000 new hospital beds, 16,000 doctors and 60,000 nurses.7 African governments have introduced price controls, import restrictions, country-specific labeling regulations and limits on retail margins.7 The implementation of these regulations make it wholly attractive for drug manufacturers to conduct GCT in Africa and produce drugs there as well.

Clinical trial data is often collected from diverse populations to support license applications. Testing in varied geographical trial sites ensures that new drugs are safe and work the same way in varying ethnic groups.8 Inhabitants of developing countries and regions have traditionally been underrepresented in medical research. As such, there is a reciprocal set of benefits for these populations and the sponsors of GCTs in underdeveloped countries. GCTs are important in efforts to provide effective new therapies and vaccines in areas of the world that typically lack access to quality medicines, helping to reduce or even eradicate diseases in the poorest countries in the world. In parallel, sponsors of GCTs gain access to a robust patient pool of willing participants, increasing development and deployment speeds at reduced operational costs.

Ultimately, there appears to be myriad factors driving the continued growth of GCTs throughout the world. From innovation that leads to increased drug accessibility to underserved populations, to a more streamlined, agile, research and development and approvals process, GCTs are of paramount importance in improving health for the global population.