Before a drug can be considered safe enough to be tested on humans, it must go through rounds of preclinical testing on animal models. While rodents are most common, non-human primates (NHPs) are the most anatomically similar to humans, and share many physiological parallels, such as highly similar immune systems. Cynbiose is a French preclinical contract research organization (CRO) that specializes in developing non-human primate animal models to demonstrate that drug candidates are ready to go to clinical trials.

I began my career as a trained veterinarian with a Ph.D. in microbiology and a background in primatology and worked at the Institut Pasteur as a scientist and at several CROs before founding Cynbiose in 2008. My vision for the company was to create a CRO focused exclusively on preclinical research in NHPs. Aside from a sole focus on NHPs, Cynbiose differentiates ourselves from other CROs based on our service offerings, including the ability to work with pathogens and microbiota in a closed environment, which allows for work on infectious diseases.

Perhaps the main differentiator at Cynbiose, however, is our flexibility. We can design customized protocols (including complex protocols) based on client requests. Because our specialty is working with NHPs, we know which species are most appropriate for various types of studies. We also adhere to a GLP-like quality management system.

Benefits of Preclinical Testing in NHPs

The advantage of working with NHPs is especially apparent when testing drugs that target an immune response. With the recent explosion of immuno-oncology candidates, vaccines, and treatments for communicable diseases, using a NHP animal model that has the closest resemblance to the human immune system allows a drug that performs well in the preclinical environment to have a greater chance of success clinically. This is also a factor when testing drugs that target the central nervous system and must cross the blood–brain barrier, which is very different in rodents but similar among humans and NHPs. NHPs allow the same target to be tested, making it even more clinically relevant.

Preclinical testing is an essential component of a drug’s life cycle, though the duration of the NHP preclinical study depends on the outcome of the candidate. For instance, a candidate’s potential for success is usually clear almost immediately during the preclinical phase based on efficacy and toxicology results. If the sponsor decides to continue with a candidate, regulatory studies will occur for approximately 6–12 months, followed by clinical trials, which will begin one to two years later. The data produced by studying NHPs in preclinical trials helps bridge the gap that exists in translational research from small animal models to humans.

Cynbiose has extensive preclinical capabilities, including challenging administration routes, such as pulmonary nebulization, intrathecal or synovial injection, as well as more routine delivery. We can sample all primate biological materials, including blood, cerebrospinal fluid, urine, feces, semen, saliva, synovial fluid, bronchoalveolar lavage, and bone marrow and conduct biopsies of all types of tissues and organs.

We also have access to different in vivo functional imaging techniques, including a scanner, micro-CT scanner, ultrasound scan, 3T and 1.5T magnetic resonance imaging (MRI), PET-MRI, and PET scan. These imaging devices can also be used in human subjects, thus ensuring translational protocols to be implemented.

We have developed proprietary and innovative capabilities such as complex neurobehavioral assessment and central pharmacokinetics procedures. Thanks to a network of preferred partners, we can propose  state-of-the-art analytical services that have been specifically developed and validated for NHP research, including immune system monitoring (Luminex, ELISA, Elispot), flow cytometry, cytokine measurement, immunohistochemistry, histological analysis and clinical pathology. Our BSL-2 and BSL-3 facility allows us to take on studies that involve viral vectors or products of this type and infectious agents.

We are constantly developing proprietary efficacy models based on sponsor needs. A recent example of this was with our stroke model, which was developed based on a large number of animals — something that is atypical. Our stroke model is nearly complete, and we are now starting a project studying the human metapneumovirus (hMPV), a virus that infects children under 6 months old — we plan to study the lung microbiota and how it is impacted by nebulized drugs. In order to access the most innovative technology and continue to progress our work, we maintain strategic partnerships in the industry.

Our facility houses up to 100 animals at a time. We build our cages vertically in order to reflect how NHPs live in the wild, as well as to make the most efficient use of our existing space, keeping with AAALAC (Association for Assessment and Accreditation of Laboratory Animal Care International) requirements. Cynbiose has been AAALAC accredited since June 2015. This accreditation demonstrates that we follow and respect the highest level of animal care and are committed to animal welfare and the health and safety of our staff. We have trained technicians and veterinary teams that specialize in veterinary medicine and laboratory animal science who handle and supervise all medical aspects of a study. To keep apace with recent growth, we plan to double our capacity over the next two years with the construction of a new, larger facility that will be held to the same standards of quality and built for animal welfare.

The goal of the Cynbiome project is to address microbiota-based therapeutic candidates that have failed in spite of being successful in rodents. We believe that these failures are largely due to discrepancies in the microbiota, which vary greatly among different species. Thanks in part to extensive HIV testing performed on macaques, we have a deep understanding of the NHP immune system, which is very similar to humans — especially in the gut tissue. We believe NHPs are relevant models for microbiota testing and plan to study the interactions between the NHP microbiota and disease to progress drug candidates to clinical testing. As drug candidates targeting the microbiota continue through the research and development phases, certain hurdles have been presented, including the need for translational research models.

Funding from the French Government

On January 28, 2020, we received a $2.1 million grant from the French government to focus our efforts on the microbiome and infectious disease. We will use these funds to continue to improve on and conduct our research, being that we have the first NHP efficacy model for studying the microbiome. The Cynbiome project will initially focus on preclinical validation for the safety of live biotherapeutic products (LBPs). This will be followed by studying the microbiota as a biomarker of or natural adjuvant to anti-infective agents and will be extended to other therapeutic areas.

By examining the link between the microbiota and infectious diseases, as well as other illnesses, and the impact the microbiota has on therapies, including in response to cancer treatments, Cynbiose will play a key role in bringing developing therapies to the clinic. NHPs are the closest animal model to humans and, therefore, the best animal model to study therapies on, with results from preclinical testing more likely to be replicated in the clinic. 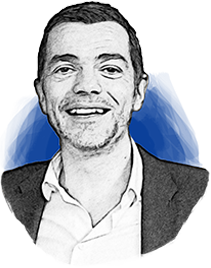 Hugues Contamin, is a veterinarian and holds a Ph.D. in microbiology. He specialized in the study of infectious diseases at the Institute Pasteur, where for 15 years he worked as a researcher. He also managed various experimental platforms such as the animal facility and primate breeding of the Institut Pasteur in French Guyana as well as the experimental animal laboratory of the BSL4 high security laboratory located in Lyon. After 3 years as head of the veterinary activity of a regulatory toxicology center, he founded two preclinical CRO, Cynbiose in 2008 and Cynbiose Respiratory in 2017.

Composition of Gut Microbiome Predicts the Onset of Type 2 Diabetes