Protalix is a biopharmaceutical company focused on the development and commercialization of recombinant therapeutic proteins expressed through its proprietary plant cell-based expression system, ProCellEx®.

About Protalix
Protalix was the first company to gain U.S. FDA approval of a protein produced through a plant cell–based expression system. Protalix’s first product manufactured by ProCellEx — taliglucerase alfa for the treatment of Gaucher disease —was approved for marketing by the FDA in May 2012 and subsequently by regulatory authorities in other countries.

Protalix is developing a pipeline of novel proteins that target large, established pharmaceutical markets that rely upon known biological mechanisms of action. Our initial commercial focus has been on complex therapeutic proteins, including proteins for the treatment of genetic disorders, such as Gaucher disease and Fabry disease.

Compared with mammalian cells, plant cells tolerate a relatively wide range of culturing conditions and do not carry the risk of infection by human or animal pathogens. Plant cells also provide a natural barrier to human and animal pathogens and can use a simple culture medium with no requirement for animal-originated supplements.

ProCellEx can also potentially express proteins that are difficult to express in other systems. Our multidisciplinary scientific teams are focused on modifying the biological properties of these biotherapeutics with an aim of improving the clinical outcomes of therapies in areas of unmet need. These capabilities are well demonstrated in Protalix’s current pipeline.

Our primary program, pegunigalsidase alfa, or PRX-102, is being developed to treat Fabry disease. This is a plant cell-culture expressed and a chemically modified version of the recombinant alpha-Galactosidase A protein. In our clinical research, pegunigalsidase alfa appears to have a favorable circulatory half-life, with targeted enzyme activity in organs affected by Fabry disease.

We believe that these characteristics may potentially enable a treatment option of monthly infusions in addition to biweekly infusions. We are developing PRX-102 in two dosing regimens with the goal of meeting two important, unmet needs: demonstrating benefit for Fabry patients with declining renal function and lowering the treatment burden of biweekly infusions. PRX-102 is currently being investigated in three fully enrolled phase III studies. We are currently targeting a U.S. FDA BLA submission under an accelerated approval pathway for PRX‑102.

Alidornase alfa or PRX-110 is our plant cell-expressed recombinant form of human deoxyribonuclease I (DNase I) to reduce the viscosity of sputum that accumulates in the lungs of cystic fibrosis patients.

DNase I therapy, or dornase alfa, is generally recommended for CF patients to improve lung function and reduce exacerbations. However, DNase I activity is compromised by actin, a globular multifunctional protein found in high concentration in the sputum of CF patients. We developed alidornase alfa by chemically modifying the enzyme, forming an actin inhibition–resistant DNase I. This novel treatment candidate may result in improved lung function and decreased incidence of recurrent infections in patients.

OPRX-106 is a plant cell-expressed recombinant human tumor necrosis factor receptor for inhibiting TNFa for inflammatory bowel disease. When administered orally and while passing through the digestive tract, the plant cells function as a natural delivery vehicle, having the unique attribute of a cellulose cell wall. This makes them resistant to degradation, compared to proteins produced via mammalian cell expression. As a result, OPRX-106 avoids the systemic exposure that occurs when TNFa inhibitors are administered by injection or intravenous infusion.

Oral administration may potentially lead to a safer-to-use anti-TNF. OPRX- 106 may also be less immunogenic, which can potentially result in longer-term efficacy. We believe that our oral delivery mechanism can potentially prove to be a safer and more convenient method of protein administration and could be applied to additional proteins in certain indications. 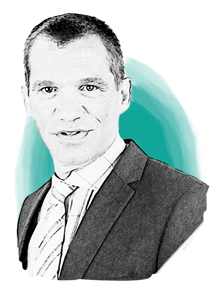 Dror Bashan joined Protalix Biotherapeutics as President and Chief Executive Officer, and as a Director of the Company, in June 2019. He has over 20 years of experience in the pharmaceutical industry with roles ranging from business development, marketing, sales and finance providing him with both cross-regional and cross-discipline experience and a deep knowledge of the global pharmaceutical and health industries. Mr. Bashan holds a BA in economics and business management from the Tel Aviv University and an MBA from the Tel Aviv University.