Neurodegenerative diseases, including amyotrophic lateral sclerosis (ALS) and multiple sclerosis, affect over 1 billion people globally, and there remains a significant unmet need to reduce the burden of disease for these patients. Despite significant investment in drug discovery and development, successes have been limited, underscoring the need for novel discovery approaches. Clene is taking one such unique approach, combining cell biology, solid-state physics, and materials science to enable breakthroughs in nanotechnology therapeutics. Clene’s President and Chief Executive Officer Rob Etherington discussed the company’s innovative technology and its potential to address the underlying causes of neurodegenerative diseases, in conversation with Pharma’s Almanac Editor in Chief David Alvaro, Ph.D.

David Alvaro (DA): Can you set the stage in terms of the unmet medical needs for patients with neurodegenerative diseases, such as amyotrophic lateral sclerosis (ALS)? What are the shortcomings of traditional approaches?

Rob Etherington (RE): ALS is a complex neurodegenerative disease with multiple pathological mechanisms, including impaired energy metabolism that culminates in motor neuron energetic failure and cell death. ALS has two drug therapies that are approved in many regulatory markets worldwide. These current treatments have limited impact on function and survival. As a result, despite available treatments, ALS remains a devastating disease that is fatal on average within three to five years of diagnosis. What ALS patients require is neurological muscle function improvement and the ability to breathe.

Similarly, in the multiple sclerosis space, patients have for many years now had disease-modifying therapies that are autoimmune drugs. But none of these — not a single one — is able to truly improve neurological function. By this I mean the way patients see, fine motor control with their fingers and hands, the ability for them to walk, even their working memory. Not a single disease-modifying autoimmune therapy improves these aspects.

DA: What is the underlying mechanism of ALS? How is it related to the causes of other neurodegenerative diseases?

RE: All of us fail bioenergetically as we get older — we experience cellular energetic failure, which we can graph decade by decade as we age. The ability of the central nervous system to be resilient, to take care of its own housekeeping, and to effectively resolve assault is mitigated and compromised as we get older. When taking into account the assault of ALS, as well as multiple sclerosis and Parkinson’s disease, things go awry.

DA: It certainly seems like there is a critical unmet need to treat these patients earlier and to more comprehensively target the underlying causes of the diseases. Can you explain the fundamental science behind your clean-surfaced nanocrystal therapeutic platform and what its benefits are?

RE: Our lead asset is a cellular energetic nanocatalyst, which is to say that it improves the ability of cells in the nervous system to use energy. It is designed to drive critical cellular energy-producing reactions in the brain that enable neuroprotection and remyelination by increasing neuronal and glial resilience to disease-relevant stressors.

Our approach is decidedly unique, and it harkens back to a thesis that has less to do with small molecules but more with the intersection of physics and material science. The reason we call the company Clene is because our asset is actually a clean-surfaced gold atomic structure: 50,000 atoms of gold, produced without any synthetic chemistry, that enables electron transfer. Electrons are fundamental building blocks of energy. Our asset is taken orally and crosses into the bloodstream, and we see evidence of it throughout the central nervous system, including in the brain, providing a catalytically active reservoir of electrons to provide the energy that the cell requires, or a boost — an increase in the energy the cell requires to perform its own housekeeping.

By consequence, CNM-Au8 is able to return the basic fundamental building blocks that we would call energetic metabolites, like nicotinamide adenine dinucleotide (NAD) and, as critically, adenosine triphosphate (ATP), to actually provide the cell the energy it requires to fight against these assaults and to see an improvement in neurological function — both by neurorepair and by remyelination.

DA: What initial clinical results in ALS have you achieved?

RE: We have a growing body of clinical data to support our approach. CNM-Au8 has demonstrated safety in phase I studies in healthy volunteers and has shown both remyelination and neuroprotective effects in multiple preclinical models. Data recently announced from a phase II study called RESCUE-ALS demonstrated clinically meaningful benefits for ALS patients. These included the slowing of disease progression and improvements to patients’ quality of life. The medical community is encouraged with the results from this study and eager to confirm outcomes in people with ALS in the 6x larger, ongoing, phase III trial called the ALS HEALEY Platform Trial.

This registrational clinical trial is led by the Sean M. Healey & AMG Center for ALS at Massachusetts General Hospital, and, importantly, our drug is one of a few in the first-of-its-kind basket study for ALS. Topline results are expected in the second half of 2022.

DA: You indicated earlier you are investigating CNM-Au8 in other neurodegenerative diseases beyond ALS. What can you tell me about the progress you have achieved elsewhere?

RE: We are developing treatments to address cellular energy in patients with multiple sclerosis and Parkinson’s disease.

In late 2021, in addition to the results of our ALS clinical trial, we revealed results of key clinical studies of CNM-Au8 in multiple sclerosis and Parkinson’s disease that show that our drug administered in an oral suspension gets into the gut and then the bloodstream, across the blood–brain barrier, and into the brains of patients to drive the energetic metabolites that address cellular energetic failure.

We have observed blinded clinically relevant improvements in stable relapsing MS (RMS) patients across the overall study population in our VISIONARY-MS phase II study evaluating the efficacy and safety of CNM-Au8. Unblinded topline data are anticipated in the first half of 2023.

DA: Those results certainly are quite promising and exciting. Given the encouraging data, what is next on the agenda for Clene?

RE: We are anticipating a busy and fruitful 2022. In the first quarter, we expect to release neurodegenerative biomarker data for patients in the RESCUE-ALS trial. The presence of this biomarker in the bloodstream is an indication of neuron death.

In Q3, the results of the HEALEY ALS Platform Trial I mentioned earlier will be revealed. This phase III Harvard-originated Registration Platform Study is the most important neurodegenerative study ever attempted in the ALS space, arguably even in neurodegenerative disease more broadly. The trial was fully enrolled in November 2021 with more than six times the number of participants enrolled in RESCUE-ALS, and the last patient will emerge from the blinded portion in May or June 2022.

If CNM-Au8 is successful, we can take the asset to the FDA with a new drug application. Approval and commercial launch would be anticipated sometime in 2023. Clene is actively preparing for this outcome through the expansion of our Elkton, Maryland, manufacturing facility. Further development of the site is being aided by a $1 million grant award from the Maryland Department of Housing and Community Development (DHCD).

CNM-Au8 is able to return the basic fundamental building blocks that we would call energetic metabolites, like nicotinamide adenine dinucleotide (NAD) and, as critically, adenosine triphosphate (ATP), to actually provide the cell the energy it requires to fight against these assaults and to see an improvement in neurological function — both by neurorepair and by remyelination.

Beyond CNM-Au8, Clene has three additional candidates in its pipeline of nanocatalyst drug candidates that are advancing: CNM-ZnAg, CNM-AgZn17, and CNM-PtAu7.  Finally, in Q2 2022, we will be releasing data on our second asset — a zinc–silver antiviral compound (CNM-ZnAg) being investigated as a treatment for the prevention of hospitalization in COVID-19 patients.

DA: It certainly sounds like a very busy and exciting time for Clene. Looking through a broader lens and given the unique mechanism of action you are pursuing, what do you believe is the full potential of your platform across neurodegenerative diseases and maybe even beyond? What else does the future hold for Clene?

RE: Fundamentally, our view is that all neurodegenerative diseases are diseases of cellular energetic failure. In all of these cases — beyond the three diseases that I’ve discussed and including both rare and much more common diseases — if Clene is successful at using CNM-Au8 as a nanocatalyst to return energy to a failing neuron, then we can apply our science, and that is exactly our intent. There are rare diseases, such as frontal temporal dementia, a type of Alzheimer’s but with a completely different etiology; larger diseases like Huntington’s; and conditions that affect very large patient populations, such as Alzheimer’s disease.

As a small company, we decided to start with ALS, as a rare orphan space of high medical need, and multiple sclerosis and Parkinson’s disease are diseases where one can see improvements in neurological function. But we are definitely thinking beyond these diseases. There is a long list of diseases, all of which are really based on cellular energetic failures. The body cannot accommodate the assault and doesn’t have the energy in which to respond against that assault to resume normal functioning.

That list includes both orphan diseases and diseases that affect large patient populations, and it gives us purpose. But before a small company like Clene can tackle a major disease like Alzheimer’s, we need to prove our thesis of neurological function change in the diseases we are currently studying. We’re excited for the future, provided that the data we anticipate in the next few quarters is as strong as we hope. 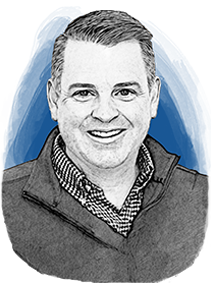 Mr. Etherington brings nearly 30 years of sales, marketing and leadership experience in the pharmaceutical industry to Clene. Prior to joining Clene as CEO, Mr. Etherington worked for Actelion Pharmaceuticals, which was the largest biopharmaceutical company based in the EU until Johnson & Johnson Pharmaceuticals acquired the company in 2017. He initially joined Actelion as founding Director of Marketing in 2000, the same year the company went public, and went on to hold various roles of increasing responsibility. Mr. Etherington served as the first U.S. commercial employee, leading U.S. commercial operations and serving as Chair of the U.S. Commercial Strategic team where he was responsible for five marketed drugs. Prior to Actelion, Mr. Etherington began his pharmaceutical career with a number of sales and marketing roles at Parke-Davis, a division of Pfizer, culminating in a Team Leader position that oversaw the drug Lipitor. As the founding CEO of Clene, Mr. Etherington has raised more than $150M in equity financings, and has driven Clene’s focus on neurodegenerative diseases.

Applying Nanocatalysis to the Fight Against ALS