Approximately six out of 100 molecules make it from the discovery stage to phase III clinical trials (Figure 1). The attrition of the other 94 molecules represents a gap in early-stage development that could be related to chemistry and manufacturing controls (CMC) issues. CMC activities include the establishment of manufacturing processes and product characteristics, as well as defining product testing methods to ensure that the product is safe, effective, and consistent between batches. To minimize the risk of later-stage failure, several key CMC areas must be considered in early development.

CMC Considerations for the Transition from Early-to-Late Development

While innovators must position themselves to meet important short-term goals (e.g., IND filings, dosing the first patient, funding, partnering), they must also consider the bigger picture and make risk-based decisions in early development that can facilitate the successful transition to late-phase development. A decision to accelerate the overall development plan should not compromise the CMC work required to maintain an acceptable level of control, as required by the regulator and industry.

Key CMC considerations in early development include issues related to toxicology (for safety assessment), the solid state of drug substance (polymorph and salt form), the transition from early-phase to the late-phase clinical and commercial dosage forms, the transition from a disposable manufacturing process train to a multi-product process train, the use of phase-appropriate analytical methods versus fully validated methods, and understanding the development history of the molecule (Figure 2).

Critical Areas of Risk Consideration for Early- to Late-Phase Transition

The following discussion points are illustrative, not exhaustive, because we seek to focus on selected issues that we considered critical for early- and late-phase drug development.

Environment health and safety. Although limited toxicology data is available during early stages of drug development, it is very important to collect this information, because it will inform decisions about handling practices at the development site. Such data will also be used to determine acceptable and permittable daily exposure limits for cleaning protocols.

For categories such as cytotoxic, beta lactam, sensitizer, and hormones, drug developers must consider long-term solutions earlier in the development process, since not all manufacturing sites can handle these types of molecules. Understanding the difference between cytotoxic versus cytostatic molecules is also important, as this may impact the containment strategy at the development site. Cytostatic molecules can be handled by many more facilities as compared with cytotoxic molecules, which can present more containment and manufacturing challenges.

API. An early understanding of the active pharmaceutical ingredient’s (API) solid-state properties (e.g., polymorphs, crystallinity) is critical for successful scale-up. For example, not understanding polymorphs of crystalline APIs can lead to a host of challenges. New polymorphs can affect the molecule’s bioavailability if the new polymorph has lower solubility than the original polymorph used in studies. In addition, if the polymorph has a different morphology, this can change its flow properties or could impact blend uniformity.

To mitigate these risks, it is important to characterize every drug lot before use in drug product manufacturing to ensure that drug properties have not changed.  As the development process progresses and more data are collected, we can identify critical quality attributes in the API that could impact the drug product. If important enough, consider controlling the attribute and adding it to the API specification.

Raw materials. Similarly, choices made early in the formulation process can have impacts on the later-stage development. The choice of excipients, their compatibility with the API, and the vendor’s ability to manufacture and supply the needed quantities of raw materials all need to be considered during the transition from early- to late-stage development, as they can impact the ability to manufacture and the quality of the final product.

Some general best practices when considering raw materials are:

Formulation and manufacturing process design. Developers should always formulate for the future, even when working with very early formulations. For example, consider adding tableting excipients to a capsule formulation or powder in a bottle. These experiments can help generate data on compatibility with these other excipients early on and make the transition between the capsule to tablet smoother.

As the development process progresses and more data is collected, we can identify critical quality attributes in the API that could impact the drug product.

Also consider developing your process on a common process train that is scalable. Using an instrumented tablet press in early development can help developers understand if a formulation is robust enough to move from one tablet press to the next.

Analytical methods. It is critical to have analytical methods that are phase appropriate, robust, stability-indicating, and able to be run on various types of modern analytical equipment. Methods may evolve as the molecule progresses.

Development history. Often overlooked, especially at small companies, is documenting the development history in a manner that is easily accessible. Document why things were done, not just what was done, as well as how risks were mitigated along the way, which will ultimately facilitate the pathway to FDA approval.

The following representative case studies underscore the importance of considering these points early in the development process.

There must be trust between the sites contracted to do the work and the organization that owns the molecule.

The API was very soluble, but very limited in quantity. The company had very limited API manufacturing experience (i.e., just one lot manufactured) and no drug product experience. Animal models showed some encouraging linear exposure of the drug, and there was a predicted low dose based on the potential efficacious concentrations that were being investigated.

Anxious, LLC decided to proceed to FIH studies first with an oral solution, and then powder in capsule, with the goal of demonstrating human exposure to support their clinical hypothesis. This information was needed for additional resources from investors. The group expected to run a small proof-of-concept study if the phase I was successful and thus made minimal investment in making phase II supplies.

In this particular case, FIH studies demonstrated good safety, but the exposure was less than predicted and highly variable in the powder-in-capsule arm. In parallel, Anxious, LLC was making the early phase II supply using their limited bulk API and faced a variety of manufacturing issues, including sticking and poor dose content uniformity.

This case study highlights the problems that can surface from missing key development activities: little solid-state characterization to understand the physical properties of the API and how it could have an impact on the material's bulk properties, formulation performance (i.e., bioavailability, content uniformity), processability, and stability.

As a result of this oversight, Anxious, LLC faced a significant delay to phase II/proof-of-concept (POC) study and additional pharmacokinetics studies were needed to confirm performance (which delayed the project and resulted in extra costs).

Think Fast Inc. had a small molecule with a high dose that was granted Fast Track designation based on the promising POC work. These studies were done with limited clinical supplies in a relatively small patient population. Think Fast Inc. needed to prepare for commercialization within 12 months per their rapid timeline.

To save time, the company decided to move its drug product manufacturing to a new site to accommodate increased scale, with the edict to “make it exactly the same as the clinical supplies.” Small teams were put in place to monitor transfer and avoid changes.

These decisions had some serious consequences. The key raw material suppliers could not meet the initial manufacturing window, because custom excipients were chosen for their phase II supply. In addition, key analytical testing was not reproducible at larger scales, and the manufacturing process had a lot of variability and in-process controls failures.

The key raw material suppliers could not meet the initial manufacturing window, because custom excipients were chosen for their phase II.

These issues caused three-month delays. Intensive remediation was needed to redevelop analytical methods for process development work at a new scale on new equipment. The suppliers had to be qualified for the larger volumes of the excipients, and a stronger project management focus was needed. This outcome demonstrates the strong importance of a disciplined technology transfer and doing a project pre-mortem to help predict and address problem areas.

Putting it all Together

Pharmaceutical enterprises were once vertically integrated: discovery, early and late-stage development, clinical studies, and commercialization activities were all done in-house. Today, these activities take place in a complex web of interdependent outside entities. There must be trust between the sites contracted to do the work and the organization that owns the molecule.

When partnering with a contract development and manufacturing company (CDMO), there should be alignment on what is appropriate for the molecule during the development journey. For example, a CDMO should be flexible and have a wide breadth of knowledge and many technology platforms and understand the quick turnaround times needed for ensuring adherence to timelines.

Figure 3 represents various activities that must be harmonized between drug developer and CDMO during the early and late phases of development.

An integrated CDMO that has the capability to support early- and late-phase development can enhance the speed of development, harmonize knowledge transfer, and reduce time spent on managing projects between disconnected entities.

Using Catalent as an example, the close collaboration between the network of sites specializing in early- and late-phase development activities allows for simplified transitions between phases that can potentially accelerate timelines and reduce risk. (Figures 4 and 5).

Figure 4: Potential to accelerate timelines and reduce risk with an integrated early-to-late solution. 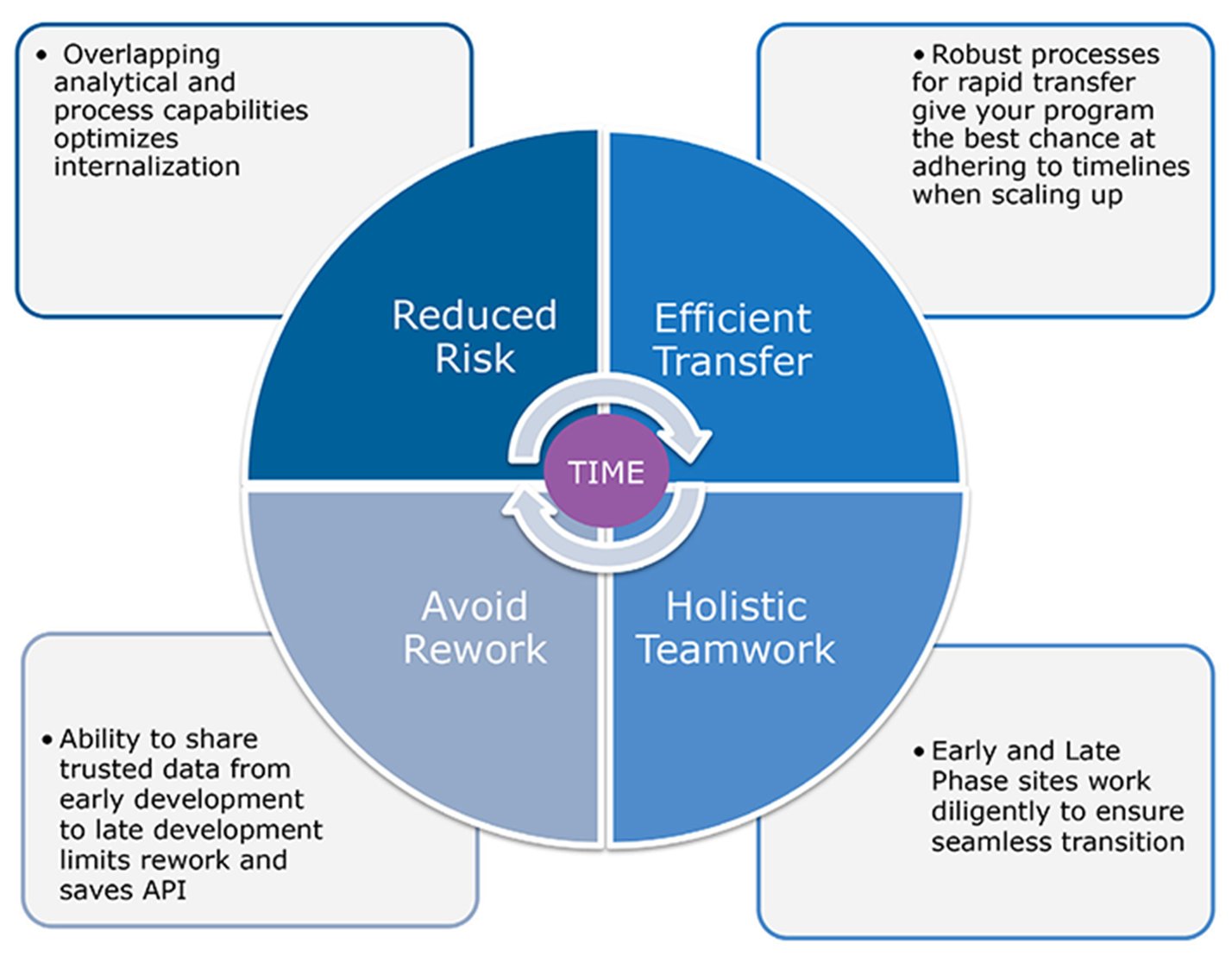 To reduce hurdles for bringing the drug for clinical studies and commercialization, developers should strategize early development and plan for clinical and regulatory success. Lack of preparation for scale-up activities needed for eventual commercialization can often cause major time delays, increased costs, and a significant amount of rework. 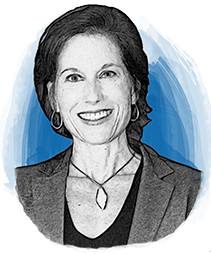 Lisa Caralli is the Director, Science & Technology, Pharmaceutics at Catalent. With over 27 years of experience in pharmaceutical research and development, Lisa’s area of expertise is in analytical methods and formulation development of small molecules and peptides. Lisa holds a bachelor’s degree in biochemistry from the University of California at Davis. 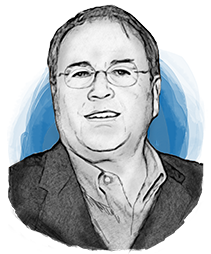