Aducanumab (Aduhelm™, Biogen), the first drug shown to reduce amyloid plaques, received accelerated approval from the U.S. FDA in June 2021 for the treatment of Alzheimer’s disease. Despite excitement in the advocacy community, several months later, few prescriptions have been written owing to ongoing questions about the rapid approval and continuing concerns regarding the safety and efficacy of the drug.

Original research at Neurimmune was performed in collaboration with researchers at the University of Zurich and led to the identification of protective anti-amyloid antibodies in healthy elderly people and patients with slowly progressing dementia that bind to brain amyloid in patient tissues. Aducanumab was discovered using Neurimmune’s Reverse Translational Medicine technology and licensed to Biogen, which co-developed Aduhelm™ with Eisai.1

Alzheimer’s disease (AD) is a devastating neurodegenerative disorder that affects nearly 50 million people worldwide and is characterized in part by the presence of extracellular amyloid plaques composed primarily of amyloid-β (Aβ).2

Aducanumab-avwa is a fully human IgG1 monoclonal antibody directed against Aβ. In patients with mild cognitive impairment or mild dementia, once aducanumab binds to amyloid, microglia cells in the brain degrade the labelled amyloid. Binding was shown via biochemical, structural, and in silico analyses to take place via a linear epitope formed by amino acids 3–7 of the Aβ peptide and with a preference for epitope-rich fibrillar aggregates.2,3

A phase I safety and pharmacokinetics study in 56 people with mild to moderate AD identified side effects, including headache, diarrhea, and dizziness.4 A larger study with 166 participants evaluated a new positron emission tomography (PET) imaging diagnostic. A phase III (PRIME) study was then initiated. Interim data showed dose-dependent reduction of amyloid deposition in six cortical regions of the brain with some cognitive improvement. At higher doses, amyloid-related imaging abnormalities (ARIA) suggestive of vasogenic edema and sulcal effusions (ARIA-E) were observed, however. ARIA-E could be mitigated using a dose titration schedule.

Two more phase III studies (EMERGE and ENGAGE) were then started.4 After the first interim analysis, Biogen and EISAI announced that they would terminate all currently ongoing aducanumab trials because the trials were expected to miss their primary endpoints. The companies reversed this decision after analysis of a larger data set, however, which showed that the primary endpoint was met at the highest dose (10 mg/kg).

Currently, a phase IIIb open-label study is underway for 2,400 previous aducanumab trial participants who are receiving monthly injections of 10 mg/kg for two years.4 Updated results from the EMERGE trial were presented in July 2021.5 Item-level analysis showed consistency in slowing decline across cognitive, functional, and behavioral measures in early AD. Separately, an assessment of the correlation between Aβ and other biomarkers of AD and clinical decline after treatment with ADUHELM was presented.

On July 8, 2020, Biogen submitted a biologics license application (BLA) to the U.S. Food and Drug Administration (FDA) for aducanumab, requesting priority review, and they filed for approval in the EU later that year. The FDA granted accelerated approval on June 7, 2021. A real-world study (ICARE-AD) has been implemented to collect real-world data on 6,000 people taking Aduhelm for up to five years, with an emphasis on ethnic/racial diversity and patients with comorbidities.4

The FDA’s Basis for Accelerated Approval

The accelerated approval pathway exists to provide patients with significant unmet medical needs earlier access to new drugs that have an expectation of clinical benefit based on the effects the drug has on a surrogate endpoint. With Aduhelm, the surrogate endpoint is Aβ plaque.6

The accelerated FDA approval of Aduhelm was granted on the basis of data from three clinical trials involving a total of 3,482 patients that showed the effect of the drug on reducing Aβ plaques, which was measured using PET imaging in a composite of brain regions expected to be widely affected by AD pathology.7

Aduhelm is the first novel therapy approved for AD since 2003 and the first treatment directed at the underlying pathophysiology of AD. The FDA was clearly aware of the controversy surrounding the accelerated approval of Aduhelm. In a statement, it said: “In determining that the application met the requirements for Accelerated Approval, the Agency concluded that the benefits of Aduhelm for patients with Alzheimer’s disease outweighed the risks of the therapy.”8 It was also stated that “treatment with Aduhelm was clearly shown in all trials to substantially reduce Aβ plaques. This reduction in plaques is reasonably likely to result in clinical benefit.”

Are Amyloid Plaques a Poor Biomarker?

Alzheimer’s experts unhappy with the FDA’s approval of Aduhelm assert, however, that a reduction in Aβ plaques is not a suitable surrogate endpoint, because the connection between reduced plaques and reduced cognitive decline has not yet been established. In one report, the conclusion was that “there is scant evidence that amyloid causes any of the cognitive and behavioral symptoms of the disease.”9

For instance, some researchers believe that the reduction in Aβ plaques following treatment with aducanumab treatment is due to continued and advanced cerebral cell death and therefore an indication of disease progression rather than improvement.10 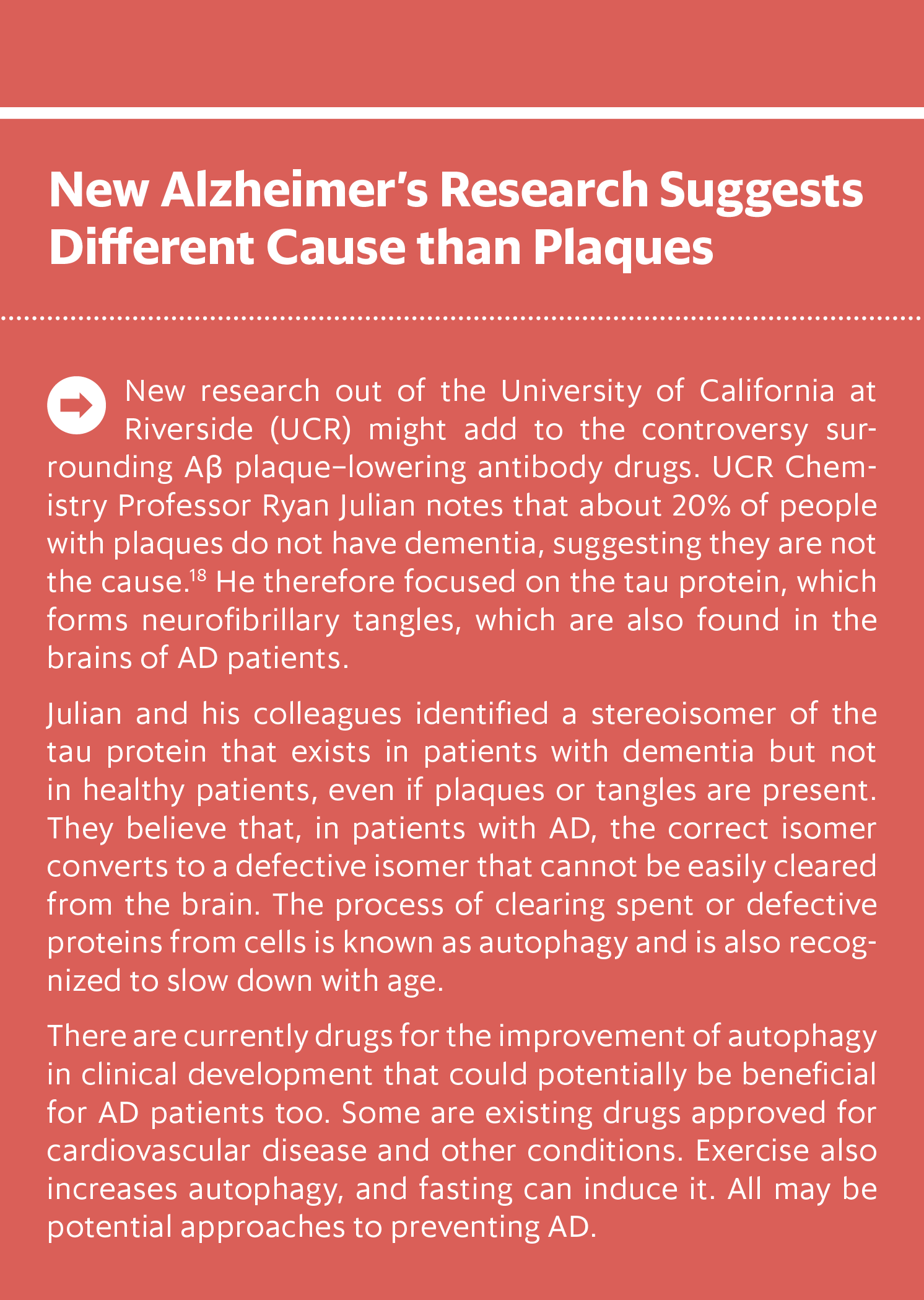 Questions about the FDA’s Scientific Evaluation

Others have raised concerns about the level of scientific evaluation employed by the FDA of both the safety and efficacy when granting the accelerated approval of Aduhelm. It has been argued that the FDA was influenced by both Biogen and patient advocacy groups, which resulted in a lack of proper scientific scrutiny.11 Indeed, within a month of its approval of Aduhelm, the FDA called for investigations into the interactions between representatives of Biogen and the FDA preceding the approval.12

There are also questions surrounding the results of the EMERGE and ENGAGE trials, which isn’t surprising given that Biogen and Eisai originally thought they failed to meet their primary endpoints.9 In fact, an FDA advisory panel in November 2020 voted nearly unanimously that the clinical data was not sufficient for approval. The agency in this rare instance rejected that decision. Three members of the panel quit in protest.

In addition, the Institute for Clinical and Economic Review (ICER) issued a statement indicating that it believes that the FDA “failed in its responsibility to protect patients and families from unproven treatments with known harms” when the agency granted accelerated approval to Aduhelm.13

Risk of ARIA Too

The main concern about the safety of Aduhelm relates to the occurrence of ARIA. ARIA involves temporary internal swelling or bleeding that can arise when amyloid plaques are removed and can lead to headaches, confusion, tremors, blurred vision, and falls.9

Initially, the FDA had granted approval to all AD patients, even though the clinical trials only involved patients with mild disease. In July 2021, the agency updated the aducanumab label, indicating that treatment was recommended for patients with mild cognitive impairment or mild dementia. Its use in patients with more severe disease and other comorbidities — also not investigated in the clinical studies — is not restricted, however.9 ARIA could potentially be more likely in these patients.

There is also significant costs for the PET scans required to monitor for Aβ plaques and ARIA. Aduhelm itself is not cheap, at $56,000 annually. Some physicians believe that existing treatments, while minimally effective, are inexpensive and much safer.9 In fact, as of October 2021, aducanumab uptake remained slow due to a combination of the high cost and the ARIA risk factors, which preclude many Medicare patients from qualifying for the treatment.14 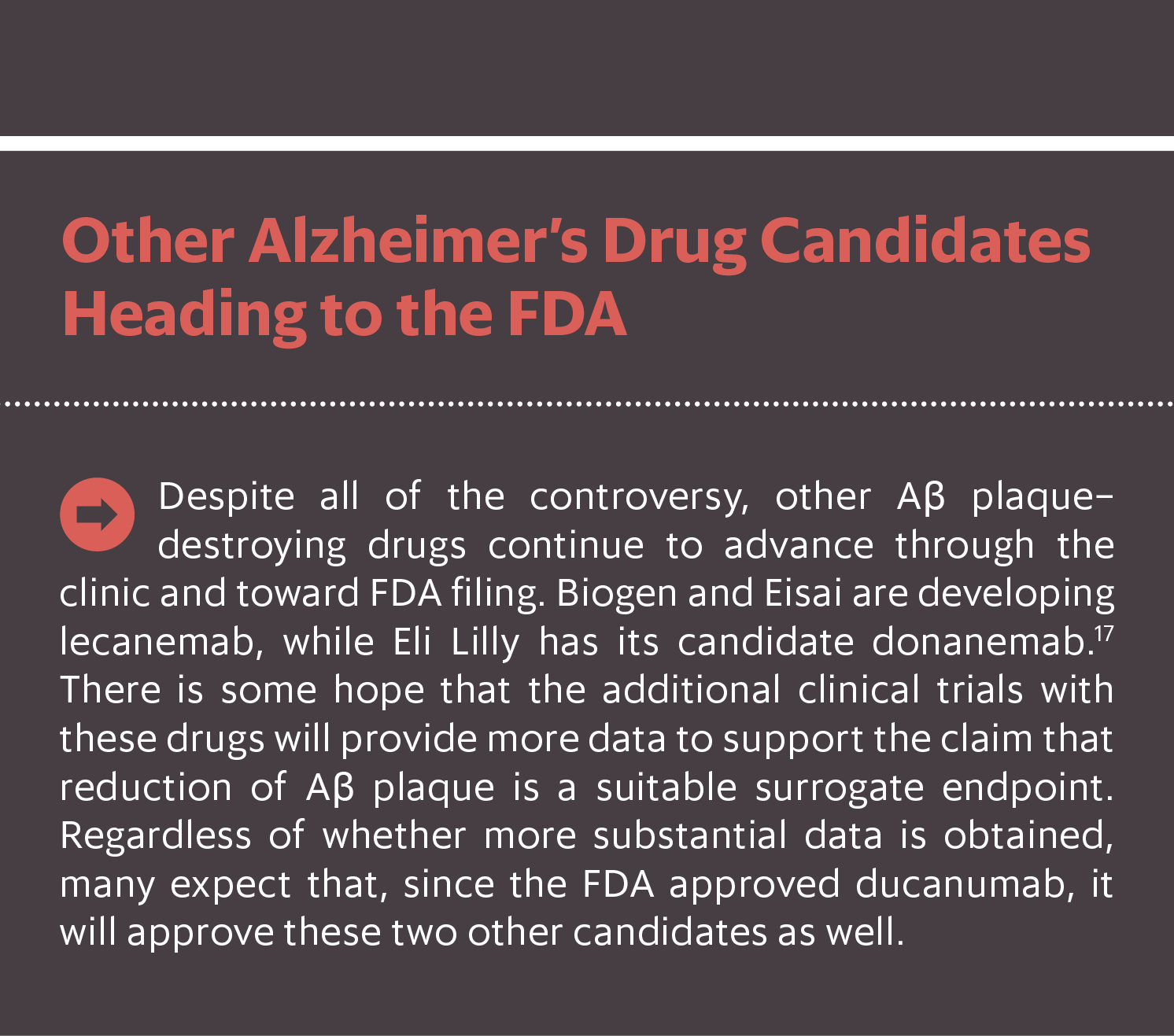 In mid-November 2021, aducanumab received a “negative trend vote” by European regulators. While the vote does not guarantee that the drug will not receive approval, it certainly is not promising. The Committee for Medicinal Products for Human Use (CHMP) of the European Medicines Agency (EMA) is expected to issue its formal opinion in mid-December 2021.15

Biogen said in a press release that it continues to believe that aducanumab “has the potential to make a positive and meaningful difference for people and families affected by Alzheimer’s disease.”16 The company also noted that at the recent Clinical Trials on Alzheimer’s Disease conference (CTAD), it announced new phase III findings that provide further evidence of aducanumab’s effect on lowering Aβ plaque and downstream tau pathology.

The Exciting Potential of Inhalation Vaccines