Water for injection (WFI) is used in the pharmaceutical industry to formulate parenteral drugs and for cleaning and other manufacturing operations. Because WFI can be incorporated into final drug formulations, the quality requirements are extremely high. Traditionally, WFI has been produced via distillation, but in the United States and Japan, pharmacopeia monographs have allowed other methods, as long as the same quality can be achieved. Following the publication of its new monograph on WFI in April 2017, the European Pharmacopoeia was brought in alignment. Reverse osmosis followed by a polishing step can be a more efficient and cost-effective solution for WFI production.

The quality specifications for WFI have long been harmonized across the United States, Europe, Japan, and China. The conductivity of WFI must be less than 1.3 microSiemens per centimeter (mS/cm) at 25 °C. All require bacterial levels to be less than 10 colony-forming units per 100 milliliters (cfu/100 mL) and endotoxin to be less than 0.25 international units (IU)/mL. Total organic carbon (TOC) must be less than 0.5 mg/L in all three compendia Europe and China require an additional maximum specification for nitrates of 0.2 ppm, which is not currently required by the United States and Japan.

WFI in pharmaceutical manufacturing facilities has traditionally been produced via multiple-effect distillation (MED) and vapor compression distillation (VC) in large stainless-steel equipment. This method basically involves boiling water and allowing the steam to travel through a large column or evaporator. Water containing impurities cools more quickly and runs back into the distillation “pot,” while the purified stream travels further up the evaporator before being condensed to obtain water that meets WFI specifications for conductivity, TOC, bioburden and endotoxins. In the case of MED, this process is repeated multiple times to increase equipment efficacy and capacity.

Because distillation involves boiling the water, it is an effective method for removing bacteria and endotoxins. In addition, the WFI produced using this method is hot, and distribution of water at a high temperature minimizes the risk of microbial contamination after the purification process is complete.

However, due to the high temperature of the process, the water must be pretreated to remove chlorine and other contaminants that can damage the stainless-steel used to construct MED and VC distillation equipment. Generally speaking, the minimum acceptable feed water for a multiple effect distiller closely approximates compendial Purified Water (and WFI by corollary), meaning a significant reduction in scale, chlorine and ion removal is necessary before distillation. In practice, many systems used for pre-treatment of MED feedwater often produce water quality that meets WFI specifications, which makes membrane production of WFI an attractive alternative.

Reverse osmosis (RO) technology has been around for over 100 years. Its use for WFI production, however, has only been allowed in the United States for a little over 30 years. Despite the acceptance of membrane-based WFI by USP, only a handful of companies based in the United States — and selling only to U.S. customers — installed RO systems for WFI generation, largely due to the distillation restriction in the European monograph. Highly Purified Water was introduced to the European monograph in 2002, which meets the same quality specification as WFI with respect to conductivity, TOC, bioburden and endotoxin but can be produced using membrane filtration technology that is equivalent to distillation. WFI, however, could only be produced via distillation until 2017. The generation of more than a decade of data on the safety and quality of RO-produced water likely led to the acceptance of this method for WFI production. In the next version of the EU Pharmacopoeia (Ph. Eur. 10), which is scheduled for release in 2020, WFI and highly purified water are merged.

Like MED and other distillation technologies, pretreatment of the water must be performed before purification via RO, owing to the sensitivity of the polyamide thin-film membrane to damage by chlorine and ammonia. The pretreated water is passed tangentially across the membrane, producing transmembrane pressure that effectively rejects a water stream containing heavier ions and allows water containing fewer ions to pass through. RO systems are often designed such that approximately 8 of every 10 gallons passed across the RO is recovered; however, systems can be designed with greater efficacy depending on project requirements and budget.

Most systems include two passes. After the first and second passes, the conductivity of the water is reduced to 10–20 and < 1 mS/cm, respectively. A polishing step, typically electrodeionization (EDI) followed by ultrafiltration (UF) is then performed. This step is necessary because, while RO is very good at removing endotoxin, there is some risk that bacteria can grow on the backside of the membrane, generating more endotoxin that could potentially pass downstream. UF ensures that effective endotoxin reduction is achieved through the use of a molecular weight cut-off UF (6,000-10,000 Dalton is typical).

RO is performed at ambient conditions, which creates an ideal environment for microbial growth. As such, RO storage and distribution systems must be subjected to sanitization (steam/heat treatment or ozonation coupled with ultraviolet light exposure). Heat-sanitizable membrane systems, in particular, allow for control of the formation of biofilms. Downstream of the membrane WFI system, the storage and distribution systems can use heat or ozone for routine sanitization, much like traditional WFI systems using MED or VC distillation technologies.

Like all other pharmaceutical manufacturing equipment and processes, they must also be qualified and validated. Systems are typically run for an extended period of time — often a minimum of 30 days — with regular monitoring to characterize their performance with respect to water purity and to demonstrate a controlled and consistent process.

Benefits of RO for WFI

The decision to select RO (or distillation) for WFI production requires consideration of several factors. The first is capital cost. A typical traditional MED system takes up a large amount of plant floor space and consumes a significant quantity of energy for steam generation and cooling, contributing to high operating costs. A MED WFI still can range from $300,000 to $600,000 (depending on capacity), which does not factor in the cost for the rigorous pre-treatment requirements necessary to protect the equipment. Vapor compression distillers can require significantly less pre-treatment and can be competitive in larger scale WFI production; however, cost and space constraints can be a challenge.

In contrast, membrane systems generally do not require steam or cooling. Sanitization of the RO membranes and piping can be accomplished using an electric heater, but steam can be used if available. Since the membrane WFI generation system is the terminal process the space requirements for the MED can be eliminated. There is also potentially less welding required and less stainless steel used in their production, allowing for faster delivery. Some existing facilities that already have an RO system installed for the generation of purified water may choose to retrofit the purified water system with a terminal UF filter. Once revalidated, the system could provide WFI water for applications that require WFI or purified water.

WFI produced using RO is particularly attractive for new facilities that rely on single-use technologies and do not require water for steam-in-place operations. In these plants, the use of an RO WFI production can result in the elimination of the need for a boiler, which can provide a significant reduction in capital expenditures, which are coupled with the savings from the eliminated MED. If for some reason a MED unit is later determined to be required or preferred, the membrane WFI can easily function as adequate pre-treatment for the WFI still.

Pharmaceutical manufacturers considering the use of RO for WFI production can benefit from the experience of an engineering and design firm like CRB.

There are some costs to RO systems that are not associated with distillation, including the need for membrane sanitization and inline monitoring of TOC and conductivity. Some companies are also hesitant about using RO for WFI due to the perceived risk of microbial contamination.

Larger, established pharmaceutical manufacturers tend to prefer to use the traditional distillation technology and hot WFI distribution systems. While no pharmacopeia requires WFI to be hot, there is a general perception that, because it has always been hot, it is essential to quality. These established companies use a legacy approach that prefers the most widely accepted method, regardless of cost or efficacy.

On the other hand, many emerging and specialty pharma companies are operating under very tight timelines. They are also highly data-driven and are looking for solutions that will provide the most efficiency and productivity combined with reliability and minimal cost. Companies like this often evaluate the data regarding membrane WFI performance, and many select this method of WFI production to realize the time and cost savings it provides.

There are also opportunities to employ RO for WFI in other areas of the pharmaceutical industry where cost is a significant factor. One such example is in veterinary medicines, where the quality and safety requirements are similar to those for human drugs, but margins are typically much lower. The final intended use for the water may determine the ultimate acceptance of membrane WFI. In some cases, companies have implemented RO systems for WFI that will only be used in final rinses (seen as relatively low risk), while others are using the technology to produce WFI for use in formulated parenteral products. The decision varies from company to company and depends on the level of confidence each has in the technology, as well as access to suitable inline monitoring and UF systems — and their ability to remediate if any issues arise.

Expanding to Other Markets

As noted previously, the largest hurdle to global acceptance of membrane WFI could be the acceptance of the Chinese market. China and India still require distillation for the production of WFI in pharmaceutical manufacturing facilities; however, some companies that sell products to these countries are moving forward with membrane WFI installations with the belief that the regulators there will allow its use given its acceptance in other key markets. It is unclear at this point when China and India will change their regulations, but RO is an established technology that can easily be implemented by companies in these countries, and the change appears inevitable.

CRB has Depth and Breadth of Experience

Pharmaceutical manufacturers considering the use of RO for WFI production can benefit from the experience of an engineering and design firm like CRB. Because we have worked with large and small companies involved in many different types of drug production, we have a depth of knowledge and breadth of experience that can be leveraged for each new project. We are able to attack projects from multiple angles to satisfy the desired water quality and system operability. We take the best parts from all of the previous systems we have installed and refine and improve them each time for the specific needs of the project and the customer. We rely on our practical experience to innovate and explore new approaches that lead to the development of optimal solutions. 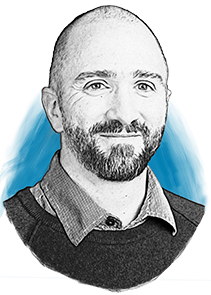 Jarrod has over 18 years of experience as a process utility engineer and project manager at CRB. Jarrod’s experience as a design lead and project manager allow him to understand the entire project from inception to completion across multiple disciplines, making him an integral part of every phase of the design team. Jarrod is a subject matter expert for critical utilities including high purity water systems, process steam systems, liquefied and compressed gas systems, waste kill/neutralization systems, and process heat transfer systems.

Lean and Client-Focused: The Future of Life Sciences Engineering and Architecture

The Future of Pharma Facilities