Leveraging Biosynthetic Expertise to Access a Wide Portfolio of Cannabinoids

Deployment of new biosynthetic methods are enabling robust, reliable, and economical cannabinoid production at scale, for applications ranging from consumer to pharmaceutical markets.

The human endocannabinoid system (ECS) comprises endogenous receptors and enzymes that are involved in the regulation of numerous physiological processes.1 Cannabinoids act as exogenous ligands that interact with the ECS via these same receptors and enzymes, leading to a number of different physiological effects. The modulation of the ECS provides an opportunity to develop cannabinoid and cannabinoid analog products that have the potential to treat various disease conditions, including but not limited to CNS disorders (e.g., epilepsy, anxiety and depression), as well as nausea, appetite control, diabetes and inflammation.

The production of cannabinoids using biosynthetic and biocatalytic processes — including the minor cannabinoids and analogs — provides a set of tools to better understand how the ECS is involved in the regulation of a number of biological functions, including disease processes. This knowledge base, along with the platform to produce cannabinoid analogs and libraries, will accelerate the development of new therapeutics to address unmet medical needs.

Teewinot’s proprietary CannSynthesis®  biocatalytic platform enables the production of natural and non-natural cannabinoids in commercially scalable quantities today. Teewinot has engineered various Cannabis enzymes for overexpression and improved enzymatic properties, which can be combined with a variety of substrates and conditions to produce a wide variety of cannabinoids, including proprietary cannabinoid analogs.

Using this CannSynthesis® approach, Teewinot has achieved > 150 grams per liter scale production at 10–15 grams per liter per hour, yielding cannabinoids that are >99% pure. The reaction conditions are such that, in a single 10,000-liter reactor, this process can produce more than a metric ton per day of certain cannabinoids.

Regarding drug development, Teewinot is leveraging its platform in combination with internal expertise and partners to develop a proprietary pharmaceutical pipeline. Currently, Teewinot has two programs that are actively moving through IND-enabling studies. This includes improved formulation and delivery systems, as cannabinoids are known to be highly hydrophobic and have issues with metabolism, duration and drug–drug interactions. As part of its drug development programs, Teewinot is working with external companies to develop new formulations and delivery approaches, including novel device combination applications.

Teewinot is taking advantage of its early mover advantage in the production of minor cannabinoids and is working with partners and looking to establish new partnerships from bench to manufacturing, given the robust and scalable capabilities of its CannSynthesis® platform today. These partnerships include strategic development and supply agreements that range from consumer product to pharmaceutical applications. Teewinot is working with companies with expertise in these markets to rapidly move toward marketed products. The company acknowledges that the regulatory environment is rapidly evolving and is diligent in all activities to ensure compliance with international regulatory guidelines.

Teewinot currently has 18 issued or allowed patents and more than 40 provisional patents. The company’s patent strategy is focused on three major areas: (1) composition of matter, (2) manufacturing methods and processes and (3) methods of use.

With a new management team in place to accelerate the platform and market opportunities, Teewinot is initiating a $50 million Series C funding round with the intent to conduct an initial public offering in 2020. 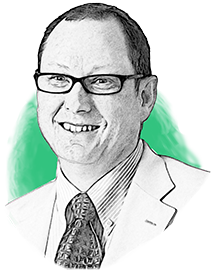 Dr. Luther has 30+ years of experience leading biopharmaceutical companies and opera¬tions. His leadership roles range from early drug development to corporate development in start-ups to global pharmaceutical companies, including Merck and GSK. Dr. Luther came to TLS from Bantam Pharmaceuticals where he was the CEO. He was also at AMRI where he was the SVP of discovery and development. Dr. Luther holds a B.S. from North Carolina State, an MBA from the Duke University Fuqua School of Business and a Ph.D. from the St. Louis University School of Medicine.