Technology for the manufacture and differentiation of induced pluripotent stem cells (iPSCs) is advancing rapidly. Model organoids and other materials produced from iPSCs are already being used to screen potential drug candidates for safety. Soon, cell therapies for the treatment of a wide variety of diseases will make it to the clinic.

An Alternative to Embryonic Stem Cells

During fetal development in mammals, pluripotent stem cells differentiate into the many types of cells required to form the organs and tissues. Embryonic stem cells (ESCs) have been used in drug development in the past. There are currently more than 10 clinical trials underway evaluating treatments developed using ESCs. In addition, HEK293 cells, which are the workhorse cells for gene therapy manufacturing, are derived from embryonic cells taken from a female fetus after an elective abortion in Holland in 1973.

Recently, however, there has been significant controversy surrounding the use of discarded fetal tissue. Therefore, the focus has switched to iPSCs, which are derived from adult cells programmed back to the pluripotent condition. While iPSCs are not identical to embryonic stem cells, they have the ability to replicate indefinitely and can be used to generate mature populations of many different types of cells.

iPSCs in Drug Discovery and Development

Access to human iPSCs (hiPSCs) has presented opportunities to improve the drug discovery and development process. Using hiPSCs for large-scale cell-based safety and efficacy allows for screening at the level of a population — an approach referred to as “clinical trials in a dish” (CTiD).1 Such screening can lead to selection of drug candidates with a much higher likelihood of success, reducing development time and cost. Using patient-derived hiPSCs to develop models that represent their actual diseases can also facilitate orphan drug development, particularly for monogenic rare hereditary diseases, by compensating for the lack of predictive in vitro human models for drug discovery.2 Several drug candidates using iPSCs for screening are in clinical trials.

Differentiated cells derived from hiPSCs also have the potential to be used as therapies to treat diseases such as cardiovascular, neurological and metabolic disorders and to repair damaged cartilage, spinal, motor neuron and eye tissues resulting from genetic causes or injury. Targets for iPSC-derived therapies include any diseases or disorders for which there are no other viable treatments and where there is a need to create functioning tissue.

Cynata and Fujifilm completed a phase I clinical trial in GvHD in December 2018 using mesenchymal stem cells (MSCs) derived from iPSCs, reporting positive results. The company plans to advance its Cymerus™ MSCs into phase II trials for GvHD and critical limb ischemia.3 The Japanese firm Healios K.K. is currently preparing, in collaboration with Sumitomo Dainippon Pharma, for a clinical trial using allogeneic iPSC-based retinal cells for the treatment of age-related macular degeneration.4 Other trials for AMD5 and the use of iPSC-derived treatments targeting ischemic cardiomyopathy,6 Parkinson’s disease,7 solid tumors8 and spinal cord injury9 have been approved. 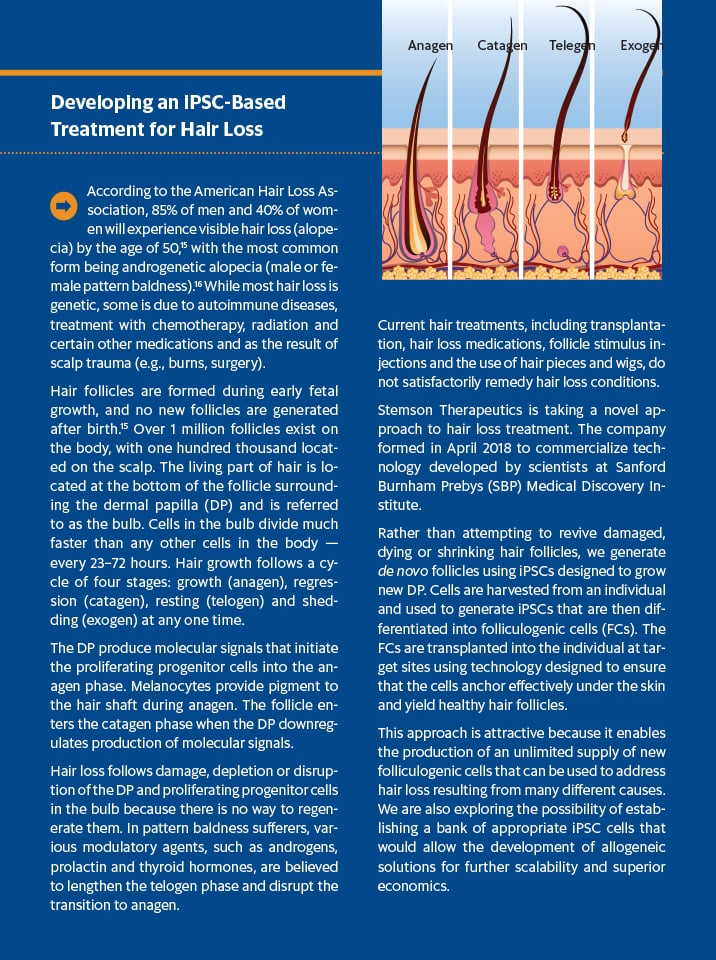 Targets for iPSC-derived therapies include any diseases or disorders for which there are no other viable treatments and where there is a need to create functioning tissue.

A key question that developers of iPSC-based therapies must address is whether to focus on autologous (patient-derived) or allogeneic (donor) products. Some companies prefer to rely on preprogrammed iPSCs or outsource this part of the development effort, because reprogramming somatic cells to generate iPSCs is a complex and time-consuming process, and they may not wish to invest in in-house resources and expertise.

Autologous treatments do not have the potential for immune rejection, because they are derived from cells taken from the individual patient. Allogeneic products typically require coadministration of immunosuppressants, but they avoid the need to address logistic, supply chain and manufacturing challenges associated with processing individual patient samples.

Several academic and industry researchers are tackling the issue of immune rejection. Gene editing is being used to delete the genes that cause immune rejection responses and insert genes to protect the iPSC-derived cellular therapies from NK cells, which can recognize “missing self” and kill such targets. Current approaches are cumbersome, and the process can take up to a year to complete. However, it is still in development and shows great promise.

In Japan, the government has invested approximately $250 million in the establishment of iPSC banks for use in the development of regenerative therapies.10 The cell donors were chosen by considering immune compatibility and overall should be compatible with 70% of the Japanese population. Similar efforts to establish iPSC banks are underway in the United States and other countries.

The source tissue must also be selected carefully. Skin biopsies, blood, hair follicles and waste material such as urine can all be used as the source of somatic cells from which iPSCs can be generated. However, the source tissue for iPSCs intended for the generation of cellular therapies (rather than drug screening) should be as mutation-free as possible. Skin cells are the least attractive, because they are constantly exposed to ultraviolet radiation; bone marrow tissue is the most protected from radiation and carries a lower mutational load.

There are also manufacturing issues that must be addressed. Unlike T cells, which can be expanded many orders of magnitude without significant loss of potency, iPSCs cannot be expanded too many times without losing their pluripotency. Because it is essential to achieve as close to 100% conversion to the derived cell type as possible, consistent, GMP-compliant processes must be developed and appropriate markers and methods identified and developed to effectively define the results. It is crucial that the leading companies developing the first iPSC-derived therapies set the standard for drug safety.

Ideally, such processes will be best achieved in centralized facilities using automated closed systems. The entire process — from the initial collection of the patient sample to production of the iPSCs — must be standardized. While no automated solution is yet on the market, there will eventually be devices into which purified samples are placed and from which iPSCs are generated after one to two weeks. Using plastic flatware to manufacture therapies will also become obsolete; bioreactors designed to support suspension and adherent culture of stem cell therapies are already on the market, and this technology is rapidly advancing.

Working in a nascent field with few established regulatory requirements can also create hurdles. These challenges are overcome through close cooperation among all stakeholders. Organizations such as the American Society of Gene and Cell Therapy bring together clinicians, hospital administrators, caregivers, academics, insurers, industry researchers and regulatory experts for honest discussions focused on identifying optimal solutions. We all have the same end goal: to get new therapies to as many patients as possible.

Estimates of the value of the global iPSC market vary significantly, but one thing the market research firms do agree on is that the market is expanding at a healthy rate. The Business Research Company estimates the global iPSC market, including iPSCs and related services, was valued at about $1.98 billion in 2018 and will increase at a CAGR of 9.2% through 2022, reaching $2.82 billion.11 BCC Research pegged the CAGR at 11.6% from 2017 through 2021, with the market value reaching $3.6 billion at the end of the period.12

Leading producers of iPSCs include FUJIFILM Cellular Dynamics, which is headquartered in Madison, Wisconsin, Europe-based Ncardia (formed through the merger of Axiogenesis and Pluriomics in 2017) and Sumitomo Dainippon Pharma in Japan. Commercial applications for iPSCs' academic research, drug development and discovery, cellular therapies, toxicology screening and stem cell biobanking.

A notable recent development was the opening of Sumitomo Dainippon’s $340-million SMaRT (Sumitomo Dainippon Manufacturing Plant for Regenerative Medicine & Cell Therapy) facility in Osaka, Japan in March 2018.13 The plant is the first to offer iPSCs for commercial applications. Cells have been available for research purposes from the National Institutes of Health’s Center for Regenerative Medicine and WiCell’s Stem Cell Bank, among others. The SMaRT plant will use iPSCs produced at Kyoto University’s Center for iPS Cell Research and Application (CiRA).