AgeneBio is developing treatments that reduce excessive neurological activity that has recently been shown to be associated with Alzheimer’s disease (AD) and other disease pathologies.

Developing Medications with a New Target

Until recently, most companies developing AD therapies were targeting pathways leading to the formation of the amyloid plaques that accumulate in the brains of AD patients as the disease progresses. Most of these approaches have failed. In 2008, we founded AgeneBio based on research I had conducted on the role of heightened hippocampal neural activity in patients with mild cognitive impairment (MCI) due to AD. Since then, that condition has been demonstrated to drive the spread of tau pathology in AD causing frank neurodegeneration, and the therapeutic space has shifted to tau pathology as a therapeutic target. Several other companies are following this lead with a focus on tau pathology and are currently in early stages of developing drugs that target the protein tau.

AgeneBio aims to reduce the overactivity of neurons in the brain to prevent the progression of AD. AD has a very protracted clinical course. The earliest prodromal phase, which involves the emergence of pathology before a clinical diagnosis, lasts approximately 10 years. We are targeting patients in this transitional stage from normal aging to early dementia.

First Trial to Test the Hypothesis

Our first phase III clinical trial (ClinicalTrials.gov identifier: NCT03486938) is evaluating our lead candidate AGB-101, an established but atypical medication initially developed for the treatment of epilepsy. When administered at very low doses, it selectively reduces neurological overactivity without altering normal synaptic transmission. Using an established medication is clinically advantageous, because its safety has already been established at much higher doses.

In addition to evaluating the effectiveness of AGB-101 to treat MCI due to AD and to prevent or delay progression to Alzheimer’s dementia, this trial will help AgeneBio test the hypothesis that overactivity drives disease progression. We are recruiting patients who are experiencing changes in their episodic memory beyond what would be expected at their ages, which is an indication of the transitional phase between normal aging and the diagnosis of clinical dementia. Notably, only patients with early signs of memory loss and the presence of amyloid plaques in the brain — as determined using positron emission tomography (PET) imaging — qualify for the therapeutic trial.

We are also excited to be pursuing a second program focused on the development of a new class of small-molecule drugs that have the potential to treat MCI due to AD, autism, schizophrenia and even a broader range of neurological and psychiatric conditions.

GABAA a5 receptors were initially a major target for Pfizer, Merck and Roche, but these companies were looking to block inhibition at these sites to produce greater excitation within the neural circuits where these receptors are highly localized. At the time, we had not yet discovered the contribution of overactivity in a range of neurological and psychiatric disorders. Not surprisingly, Pfizer found that their GABAA a5 inhibitor actually led to a worsening of elderly patients in clinical studies.

AgeneBio’s GABAA a5 Positive Allosteric Modulator (PAM) program builds on the science developed for AGB-101. We are developing GABAA a5 PAMs with high selectivity and potency to treat neural imbalance in excitatory and inhibitory function. A lead candidate is now advancing to an IND and clinical phase I.

Until recently, most companies developing AD therapies were targeting pathways leading to the formation of the amyloid plaques that accumulate in the brains of AD patients as the disease progresses.

Looking to the future, we expect to have readouts of definitive data from our AGB-101 phase III study in approximately two and a half years. In the meantime, commercial partnerships are under discussion to enable us to reach patients around the world who are anxiously awaiting an effective treatment for AD. At the 12th annual Clinical Trials on Alzheimer’s Disease (CTAD) on December 4–7, we presented an update on the status of the phase III clinical trial and new scientific information on AGB-101.

While the phase III study proceeds, we will be investigating other potential indications that could benefit from treatment with AGB-101. We also plan to expand our GABAA a5 program in preclinical studies across additional indications in 2020 as we approach early stage clinical studies. 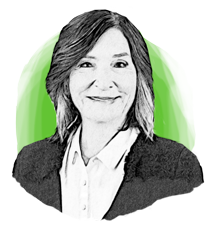 Michela Gallagher, Ph.D. is the Krieger-Eisenhower Professor of Psychology and Neuroscience and heads the Neurogenetics and Behavior Center at Johns Hopkins University. She is also founder and CEO of AgeneBio, Inc. She is recognized for her contributions in cognitive neuroscience as a recipient of the American Psychological Association’s D.O. Hebb award and the Society for Neuroscience Mika Salpeter Lifetime Achievement Award.

Exploring the Natural Pharmacopeia and Incubating a Biotech Company