Impacts of Glocalization on the Pharmaceutical Industry

Globalization in the pharmaceutical industry has occurred simultaneously with glocalization — increasing local drug development and manufacturing in emerging markets. Not only large multinational firms, but regional and domestic drug companies are taking advantage of the opportunities presented by these growing markets.

Globalization in the pharmaceutical industry has been occurring for many years owing to increasing demand for advanced medicines in emerging economies, a desire for drug manufacturers to reduce costs and the growing challenges with clinical trial recruitment in mature markets. Pharmaceutical companies have established both R&D and production facilities around the world. Similarly, a steady rise in outsourcing of noncore activities has led to the growth of contract research, development and manufacturing organizations with global operations.

At the same time, a movement toward local pharmaceutical development and manufacturing has been occurring. “Glocalization” of the pharmaceutical industry is driven in part by governments, nongovernmental organizations (NGOs) and local entrepreneurs. The overall goal is to develop a reliable supply of low-cost, advanced medicines and increase access in countries/regions that traditionally have lacked the infrastructure, resources and skilled labor to produce and distribute drugs cost-effectively.

Glocalization is also, in part, a response to globalization — and perhaps a more accurate term altogether, according to some.1 It has occurred as a means for individual countries to reestablish control over their local economies and social, cultural and political norms while continuing to operate in larger regional networks and international industries.1 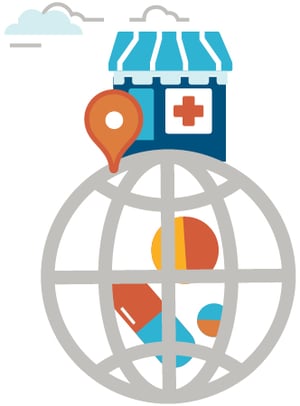 Global pharmaceutical industry revenue rose from $390.2 billion in 2001 to $1.2 trillion in 2018, according to trend forecasting by Statista.com.2 This revenue is predicted (by data science company IQVIA) to expand at a 4–5% CAGR (down from the 6.3% CAGR observed for 2014–2018) to reach $1.5 trillion in 2023.3  NAVADHI Market Research’s estimate is slightly higher, at $1.7 trillion by 2023.4 The values are based on invoice pricing rather than net revenue, which is the revenue actually received after accounting for rebates and deductions. Net revenue is predicted by IQVIA to grow at a compound annual growth rate (CAGR) of 0–3% through 2023.3

Growth in the industry is attributed to the expanding and aging population combined with greater demand in emerging economies, as well as increasing numbers of novel treatments for rare and specialty markets.4 Trends and issues leading to lower growth in the global pharmaceutical market include a slowing world economy, the growing adoption of biosimilars and downward pricing pressure; this is occurring in combination with changes to reimbursement policies, notably in the United States.3

With respect to innovation, IQVIA predicts that next-generation biotherapeutics, prescription digital therapeutics, the application of real-world evidence, artificial intelligence and virtual clinical trials will have a significant impact on the industry over the next five years.5  Biologics are predicted to account for one-third of new product launches during that time, and spending on new products commercialized from 2019–2023 will average $45.8 billion, up from $43.4 billion for 2014–2018. Key therapeutic areas of focus will include oncology, with 70–90 new medicines introduced in the next five years, along with nonalcoholic steatohepatitis (NASH), migraines, neuromuscular diseases, autism and other developmental disorders and a range of molecular targets for cell and gene therapies.5

The overall goal is to develop a reliable supply of low-cost, advanced medicines and increase access in countries/regions that traditionally have lacked the infrastructure, resources and skilled labor to produce and distribute drugs cost-effectively.

Notably, sales of pharmaceuticals in the BRICS and MIST countries doubled over a five-year period to account for approximately 20% of the global market.6 This growth is due to increasing life expectancies combined with greater prosperity and hence demand for novel medicines. Pharma companies have also targeted emerging markets in recent years due to slower growth in mature markets combined with increasing generic competition. Access to generic drugs and biosimilars has also had an impact in emerging markets.

While emerging economies traditionally required access to drugs against infectious and communicable diseases, changing lifestyles accompanying the greater wealth in many emerging markets has resulted in a growing incidence of cardiovascular diseases, diabetes and many forms of cancer. The incidence of diabetes and cancer is expected to increase by 20% or more by 2030.6

The value of the Chinese pharmaceutical market, which was the second largest in 2018, is pegged by IQVIA at $137 billion and is expanding at a CAGR of 3–6% through 2023, to reach as much as $170 billion.5 Other emerging markets of note include Turkey, Egypt and Pakistan, which are predicted to experience the fastest growth through 2023.

It is also worth noting that the cost of performing clinical trials in emerging economies can be lower. Outsourcing of development and manufacturing to companies located in emerging economies has also been a strategy of international biopharmaceutical firms looking to reduce costs and potentially gain access to these growing markets.

One of the key challenges, however, is the prevention of the sale of fraudulent medicines in developing countries. According to the World Health Organization, 25% of marketed drugs in low- and middle-income countries in 2007 were substandard.7

What Does Glocalization Mean for the Future Pharma Industry?

The impact of glocalization must be considered within the overall context of the pharmaceutical market as it exists today and expectations for medicine demand going forward. By 2050, over 20% of people globally will be over 60 years of age,8 and nearly 40% of Americans will be diagnosed with some form of cancer during their lifetimes.9

Despite these statistics, the next decade will be challenging for the pharma industry, with a reduced growth rate due largely to difficult conditions in the U.S. market.10 Although specialty drugs are still growing rapidly, R&D productivity is down at international biopharma companies, and they will face more competition as small and mid-size firms, who, instead of licensing out their new technologies as in the past, are taking them through commercialization.10

All companies will be challenged to invest in data management and analysis technologies to fully utilize digital and mobile technologies. As outsourcing of noncore activities has become essential, so has the establishment of global networks for success in everything from R&D to marketing.8 Large pharma companies are now horizontally, rather than vertically, integrated; rather than relying on a few R&D hubs and controlling all aspects of development and production, pharma companies are outsourcing these activities to develop products for specific markets.8 Glocalization will also continue to be driven by government policies and the need to meet the requirements of government-sponsored and government-based healthcare providers.

The focus will continue to shift to the patient, driving the development of personalized medicines and creating more opportunities for small firms and startups specializing in targeted disease areas.8 Pharmaceutical companies that can engage with patients through multiple avenues, including novel digital solutions, will have a competitive advantage. As a consequence, glocalization — and globalization — are only the first steps in a significant transformation of the global pharmaceutical industry.8