Medicinal cannabis research is an idea whose time has come. In fact, it’s an idea whose time should have come years ago but had been halted thanks to nearly a century of pointless prohibition. Like willow bark, echinacea, and ginseng, we have long known that the marijuana plant has amazing potential for healing and promoting wellness, but where those other plants have benefited from ongoing and more advanced research, we are only just now exploring the full potential of cannabis. With legalization a fact in Canada and sweeping the United States one state at a time, scientific centers are scrambling to develop new medicines based on cannabis, where speed-to-market will determine whose products are most lucrative.

It’s no wonder that businesses are rushing to monetize the untapped potential of cannabis. As legalization spreads, the many benefits of this amazing plant seem to multiply. We are only just beginning to grasp the full anesthetic properties of cannabis, which the Chinese surgeon Huo Tuo first mixed as a powder with wine to numb his patients’ pain between 140 and 208 CE. Even with the damage done by prohibition, experts believe that cannabis can alleviate the symptoms of epilepsy and multiple sclerosis, help with day-to-day pain and inflammation, improve appetites, and reduce nausea.

And that’s without even considering its benefits for treating depression, anxiety, posttraumatic stress disorder, and other maladies of the psyche without the side effects associated with prescription drugs. We only need consider the possible advancements if we were to master the human endocannabinoid system and understand how it interacts with the THC, CBD, and terpenes in the plant for which it was named to realize that cannabis has the potential to reshape the medical landscape in some truly provocative ways.

The Risks of a Gold Rush

This haste to find the newest treatments and medicines creates risk, as haste always does. The faster that doctors and scientists work, the more they must be sure that their test results are verifiable, reproducible, and, most of all, secure. One rushed experiment — or even a hastily mis-recorded number in one place — could invalidate countless hours of hard work, create a data loss, or even result in an information breach. Of course, researchers and the organizations they work for will always take as many precautions as possible and follow best practices to check and secure their results, but given how fast information technology is changing and how rapidly cannabis research must bear fruit, a next-level solution is required to truly suit the emerging needs of the medical and pharmaceutical industries.

Decades of mistrust and misunderstanding have held cannabis science back to create this R&D gold rush. So, it’s only fitting that a budding technology not many people understand should emerge to provide the ideal format for recording, verifying, and securing the new advances our brain trust can draw from the cannabis plant. This new technology is called blockchain, and just as it was created to track and record transactions in the misunderstood and once-underground world of cryptocurrency, this software will revolutionize how the misunderstood and once-underground cannabis plant will give up its secrets. By investing in blockchain, research centers will have an ironclad account of every new idea and advancement their scientists perfect, without any of the security and redundancy risks associated with older software.

Anyone who’s even tried to keep up with tech news in the last few months has probably at least heard the word blockchain. It’s one of those buzzy terms like “cloud,” “analytics,” and “Internet of things” that crops up and is suddenly the talk of tech town, and like the terms above is more than just an all-sizzle-no-steak fad; instead, it is a very real leap forward in how we use computers and the internet. And blockchain is especially interesting given its origins — not among the on-site sushi bars, posh commuter buses, and indoor playground slides of Silicon Valley, but from the private servers of cryptocurrency innovators and the high-risk recesses of the Dark Web. And this shadowy background is exactly what makes blockchain such a perfect security system — to thrive where it came from, it was built tough.

Blockchain is a digital ledger first created by a person or persons working under the assumed name Satoshi Nakamoto in 2008 to track and secure cryptocurrency transactions. Without a guaranteeing body (like a government) or a base (like a precious metal), cryptocurrency requires an absolute guarantee, if not of its moment-to-moment value per coin, which can vary, but at least of its safety from tampering. A system must be in place to confirm that each unit of cryptocurrency (for example, one bitcoin) was only sold once per transaction, and that no sold currency was sneakily snatched back to the seller or siphoned off in whole or in part into the coffers of some enterprising third party.

The Benefits of Blockchain

So, what sets blockchain apart from other recording software, making it such an ideal fit for cannabis research? New information entered into the blockchain is assigned an unbreakable cryptographic signature called a hash. This hash cannot be tampered with, altered, or disguised, nor can the information the hash represents be altered without permission, making all information entrusted to the blockchain ironclad, with a unique signature to keep it trackable in all circumstances. Blockchain is duplicated and distributed across every participating system in the network and requires all relevant stakeholders to confirm any changes made to their part of the ledger. As a result, blockchain is an extremely secure tracking system custom built for sharing with peers that is immune to both tampering and accident, offering any project unparalleled trackability, redundancy, and transparency, all of which are ideal for research projects trying to bear fruit quickly and securely in a competitive market.

By adopting blockchain, cannabis researchers can have every new discovery or step toward a discovery saved in a unique, encrypted block of data. This will ensure that projects can be tracked step by step, with the authenticity and validity of each step stamped in code that cannot be compromised. In the often fluid and changeable world of online document management, blockchain is a unique opportunity for solid and dependable recordkeeping. Each line item in a project is just as important as any other in a blockchain, so that researchers can easily detect or isolate both specific steps and potential errors, making it much easier to troubleshoot or verify a series of experiments, as no single detail is more secure or benefitting from stronger redundancy than any other.

Blockchain owes much of its unparalleled reliability to its redundancy. By copying the ledger to every system in the participating network, blockchain gives everyone on a project equal visibility while ensuring that the loss of one ledger is meaningless to the survival of the overall record. While it is possible for anyone with the proper permissions to make changes to an item in blockchain, such changes immediately become visible across all copies for all users and must be confirmed and validated by the appropriate stakeholders for those changes to become final. Even then, blockchain clearly documents the changes across all systems to ensure a clean record.

Blockchain’s third major feature is a result of the first two, as redundancy and security together offer cannabis researchers incredible transparency. Prohibition once made it difficult to share information, forcing researchers to rely on unreliable data and hearsay; nowadays, blockchain makes it easy to compare notes, as the information is both automatically shared and duplicated to other systems and can be relied upon for accuracy down to the most minute detail. Professionals working on the same project can guarantee that everyone is on the same page, making collaboration much faster and more dependable, even across multiple facilities.

As perfect a tool as blockchain is to accelerate and refine medical cannabis research, its adoption by adjacent industries will further enhance scientific efficiency. For example, the creation of electronic medical records (EMRs) has long been a goal within the research community, held back by a lack of security, standardization, and transparency — which are all features that blockchain can provide. Alternate Health is already using blockchain to create an EMR database tailored specifically to medicinal cannabis, which will allow researchers to ethically access a secure collection of patient records, dramatically reducing the time it takes to populate trials with both data and test subjects.

Blockchain will also soon be adopted by the cannabis distribution and sales industries, allowing scientists to track products from farm to consumer much more accurately, even as such transactions remain illegal under the United States federal government.

In the race for revolutionary cannabis research, blockchain really is the killer app. No other means of tracking information offers the same sort of continuity matched with security and transparency of data. So much time that researchers used to spend double- and triple-checking their work can now be spent performing experiments and logging results. No other ledger is copied and distributed across so many systems, making research easy to standardize and validate by all teams at once and ensuring that no changes are made without proper supervision and no mistakes that could cost weeks or even months of man-hours slip through the cracks. Blockchain will allow scientists to quickly make the key discoveries that enshrine cannabis among the other great medicinal plants that have so improved human wellness throughout our history. 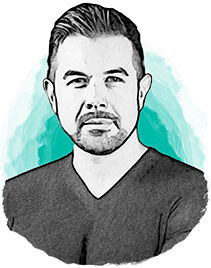 Robert Galarza is Chief Executive Officer of TruTrace Technologies, developer of the first integrated blockchain platform that registers and tracks intellectual property from genome to sale for the cannabis industry.