The U.S. Food and Drug Administration has imposed slow and steady restrictions on the sale and use of tobacco over the last 60+ years. That smoking is harmful to human health was first acknowledged in the medical community in 1954, when Richard Doll and A. Bradford Hill confirmed the link between lung cancer and smoking in findings published in a study in the British Medical Journal.

In the years following, actions have been taken to dissuade tobacco use, including adding warning labels to cigarette packaging, banning smoking in public places and funding federal campaigns urging smokers to quit. Tobacco use is now regarded as a health risk, and the connection between poor health and tobacco use is considered uncontroversial.

In spite of opposition, regulatory or otherwise, the tobacco industry is still relying on minors to become the next generation of smokers. Tobacco companies have a well-documented history of targeting young people and, before restrictions were placed on advertising, used billboards to communicate that smoking was “cool” and an “adult” thing to do.

My Personal Journey Against Tobacco Marketing

I moved to New York City in 1992 for a college exchange program at the Fashion Institute of Technology, from the village of Studham in the United Kingdom (2019 population: 1,128). While in the United States, I was taken aback by how minors were targeted by tobacco companies — from ubiquitous outdoor billboard ads to sponsorships of sporting events and concerts and promotions like Camel Cash and Marlboro Miles, which overwhelmingly appealed to teenagers. As a further example of this marketing, Virginia Slims sponsored a women’s tennis championship, held annually at Madison Square Garden, in order to appeal to teenage girls.

I was not used to seeing such bold, repetitious messaging encouraging such an unhealthy activity, specifically in youths, and found it alarming. I felt so strongly about this that I decided it would be the subject of my dissertation.

To conduct my dissertation research firsthand, I planned to take a road trip across America and personally observe the extent of the signage that I knew was out there. The obvious first step of this journey would be to rent the vehicle that would take me across country, but, much to my chagrin, only those aged 25 and older were able to rent a car in the United States. I had just turned 21 and four weeks, so that marked the end of that.

Going on the Road to BIO After 25 Years

Of course, I never gave up on my dream of driving across the country. The temporary roadblock, in which I was denied the right to drive over the American open road, would be officially lifted in 2017, about 25 years later. So it was in 2017 that I again decided to drive (along with seven select staff) across the country in a chrome-wrapped Lamborghini Aventador Roadster SV, as well as an RV. The trip, which we dubbed the Road to BIO, started in Cambridge, Massachusetts and ended at the BIO International Convention in San Diego, California. Over 12 days and 100 hours of driving, we logged over 6,000 miles, crossed 19 state lines and visited and interviewed 15 clients. We were thrilled to be able to release a film documenting this journey as the first release from Nice Passion, a non-commercial venture focused on making short films, each highlighting a unique passion of an individual juxtaposed with their daily work in life sciences (www.nicepassion.com).

E-Cigarettes: Echoes of the Past

Throughout the Road to BIO, taken 25 years later, the signage targeting minors on behalf of the tobacco industry was noticeably absent compared with the roads in 1992, the year I wrote my dissertation. In 1998, lawsuits entered by the attorneys general of 46 states against the four largest tobacco companies (Phillip Morris Inc., R.J. Reynolds, Brown & Williamson and Lorillard) to recoup Medicaid expenses for tobacco-related healthcare costs resulted in the Tobacco Master Settlement Agreement. In addition to agreeing to annual payments in perpetuity to cover the states’ healthcare expenses, the tobacco companies agreed to restrict their advertising, sponsorship and lobbying activities, particularly those that could be construed as targeting minors. Specifically, the Agreement called for an end to tobacco advertisements on outdoor billboards and transit vehicles as well as any marketing associated with sports and other public events. These restrictions were formally codified into law with the 2010 passage of the Family Smoking Prevention and Tobacco Control Act.

Unfortunately, tobacco companies are still targeting minors, if not in the same obvious way — and the FDA is still fighting, steadily imposing new regulations. The recent explosion of popularity of e-cigarettes and vaporizers has created a new front in the battle between tobacco companies and regulators that closely resembles the conflict of a generation past. By 2014, e-cigarettes had surpassed combustible cigarettes as the tobacco product of choice among American middle and high school students, with more than two million teens using these products in 2017.

E-cigarettes pose a new and specific threat to young people that threatens the gains made over the years by anti-smoking campaigns. The most famous of these e-cigarette products — the JUUL — contains as much nicotine within a single “pod” as a pack of regular cigarettes and may expose users to toxic chemicals with the potential to cause serious health effects. The marketing of these products takes advantage of the public perception of the health risks of smoking to position e-cigarettes as a healthier alternative, obscuring the real health risks of these products, as well as the dangers of creating new nicotine addicts who will inevitably transition into smokers of conventional cigarettes.

When they first brought them to market, manufacturers of these products were able to exploit loopholes in the laws that explicitly targeted combustible cigarettes to market them in ways that had long been prohibited. Suddenly, we saw the return of the dreaded billboards and cross-promotional campaigns. If anything, the companies peddling e-cigarettes found even more egregious means of targeting youths than in the past, creating products with fruity flavors — crème brulee, mango, bubble gum — designed to appeal to young users, sold in packaging designed to mimic either juice boxes and candy (and even packaged with lollipops and other sweets) or the streamlined look of Apple and other trendy tech products.

However, the FDA, under the leadership of outgoing Commissioner Scott Gottlieb, has identified the use of these products by teenagers as a major public health issue  and has enacted and proposed policies to close these loopholes. The agency has already cracked down on youth-targeted packaging and promotions and has succeeded in restricting sales of flavored e-cigarettes (except for tobacco, menthol and mint) in stores. Additionally, the FDA has expanded its successful youth tobacco prevention campaign, “The Real Cost,” to educate teens about the real risks of vaping and to reverse public perception that e-cigarettes are a harmless alternative. There is still considerable work to be done to combat the current epidemic of teen e-cigarette use, but it is becoming clear that regulatory efforts will follow the successful precedent of the original effort against youth smoking. 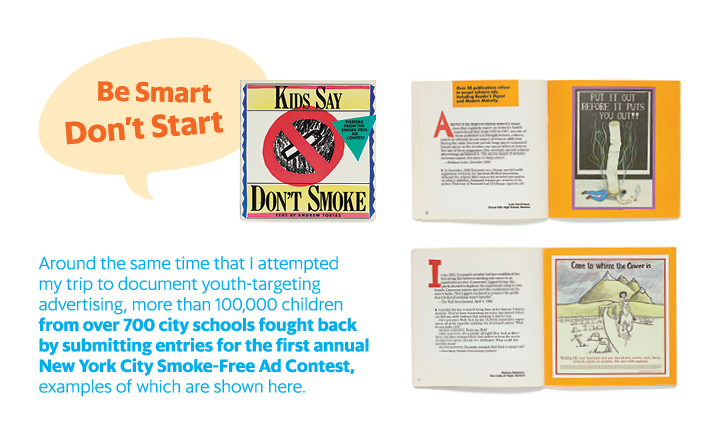 Although that aborted road trip didn’t appear hugely significant at the time, I have been struck since by its continued relevance. The intersection between marketing and healthcare was a unique consideration for me in 1992, but it ended up being the focus of my career, and I joined an advocacy group in New York that publicized the marketing of cigarette advertising to minors, which I was part of for three years.

I also never lost that yearning for a great American road trip, although it did take me 25 years to make it happen. And, while I redirected my attention to other issues and concerns, I continued to follow the regulatory and educational efforts to fight smoking among young people and exulted in its successes, only, distressingly, to see echoes of the same issues appear again in recent years. However, I do feel confident that we have collectively learned the lesson from decades past and that we will be able to quash teen vaping as effectively, and more quickly, than we reduced teen smoking.

Delivering Vaccines During a Pandemic

There Were No Passengers On This Journey