Gene-edited human mesenchymal stem cell (hMSC) therapies have yet to reach the clinic, but they will soon, given their wide therapeutic potential. However, challenges with transduction efficiency and the viability of gene-edited hMSCs after transduction have created barriers to the development of robust allogeneic gene-edited hMSCs. Overcoming these challenges and realizing the full potential of this therapeutic modality will likely require some new enabling technologies, tools, and media. Here, we provide an overview of the therapeutic possibilities being explored for hMSCs and the present development challenges and highlight one solution, RoosterBio’s purposely designed genetic engineering medium RoosterGEM, that is helping hMSC therapy developers reduce time to the clinic.

The Importance and Limitations of Unmodified Human Mesenchymal Stem Cells

Mesenchymal stromal or stem cells (MSCs) are typically adherent cells that can both self-renew and differentiate into different types of cells, including those with adipogenic, osteogenic, and chondrogenic lineages.1 Additionally, MSCs exhibit immunomodulatory behavior, exhibit low immunogenicity, and can induce regeneration and maintain homeostasis, largely due to their ability to move to target tissues.

Most notably, human MSCs (hMSCs) have been demonstrated to be safe following their use for the last two decades in tens of thousands of patients and hundreds of clinical trials. From 2011 to 2020, over 1500 hMSC clinical trials were posted, 126 of which were late-stage (phase II/III or later) and 16 of which were post-market (phase IV) studies.2

Despite their attractive properties, natural hMSCs transplanted into patients often do not achieve the maximum benefits possible, because some of the cells are destroyed within the transplanted microenvironment, others have lost their ability to differentiate and multiply, and ultimately only a small percentage of the cells are able to migrate to the target site.1

One method of addressing the limitations of natural hMSCs is to modify them using gene-editing tools to produce stable, robust allogeneic or off-the-shelf therapies.3 The goal is to improve cellular survival, increase migration, homing, and adhesion to target sites and to avert senescence, poor cell division, or growth.1

With respect to cell therapies, gene editing has been mainly used with T cells and hematopoietic stem cells (HSCs), but its application to MSCs is increasing. Since 2000, the number of both grants and patent filings related to the gene editing of MSCs has increased dramatically.4

While the first IND-enabling clinical studies for cell therapies based on gene-edited hMSCs have not yet occurred, they are anticipated to take place within the next several years.5

Modified genes must be introduced into the hMSCs via either transduction or transfection. Different methods can be used, including a variety of viral and non-viral mechanisms, each with its own set of tradeoffs. For example, viral methods are typically more efficient at delivering the gene editing machinery across cell membranes and into the cytoplasm and have lower overt toxicity, but can exhibit greater off-target nuclease activity by the gene editor. Researchers continue to explore the use of different viruses and non-viral methods, including hybrid methods wherein the gene editor is introduced into cells via physical or chemical methods and virus is used to introduce the recombinant DNA sequence. Because different primary cell types respond differently to different transfection methods, trial and error are used to empirically determine the most efficient method that affords a pool of hMSCs within which the vast majority have been properly modified.

Traditionally, however, genetic modification of primary cells like hMSCs has resulted in low efficiency of transfer accompanied by higher cell toxicities. Primary cells tends to have limited growth potential and short life spans and can be difficult to maintain under typical culture conditions. The result is low yields of hMSCs with the desired genetic modification. The ability to edit a relatively small number of cells (millions) and expand them afterward is key to the cost effectiveness of gene editing.

For the best results, cells need to be homogeneous and used as soon as possible. A large excess of the delivery vehicle is typically used (e.g., a high viral agent multiplicity of infection (MOI)) to ensure an acceptable transfer efficiency. For transduction using viral vectors, for instance, that means higher amounts of viral particles are required, leading to significantly higher costs. Extensive optimization is also necessary with respect to media, sera, supplements, and process conditions, which adds to the time and costs required for traditional genetic modification.

Engineered from the ground up, RoosterGEM was built as part of a simplified, efficient, and economical hMSC genetic engineering platform. It is configured to require less manual intervention, saving process time and reducing opportunity for human error.

In addition, the simplified transduction workflow and translation-friendly formats made possible by RoosterGEM not only reduce key LV and raw material costs, but also allow researchers and product developers to custom-engineer their clinical transduction protocols more efficiently and focus on their viral agent so they can reach the clinic faster.

Use of RoosterGEM alone or in combination with RoosterBio’s high-volume, xeno-free hMSCs resulted in two- to four-fold increases in percent-modified hMSCs derived from multiple tissue sources (see Figures 1–3). This high performance enables a reduction in viral particle concentration and reagent expense, adding up to more than 50% cost reduction versus traditional transduction reagents in a model genetic engineering process involving banked, pre-expansion cells. 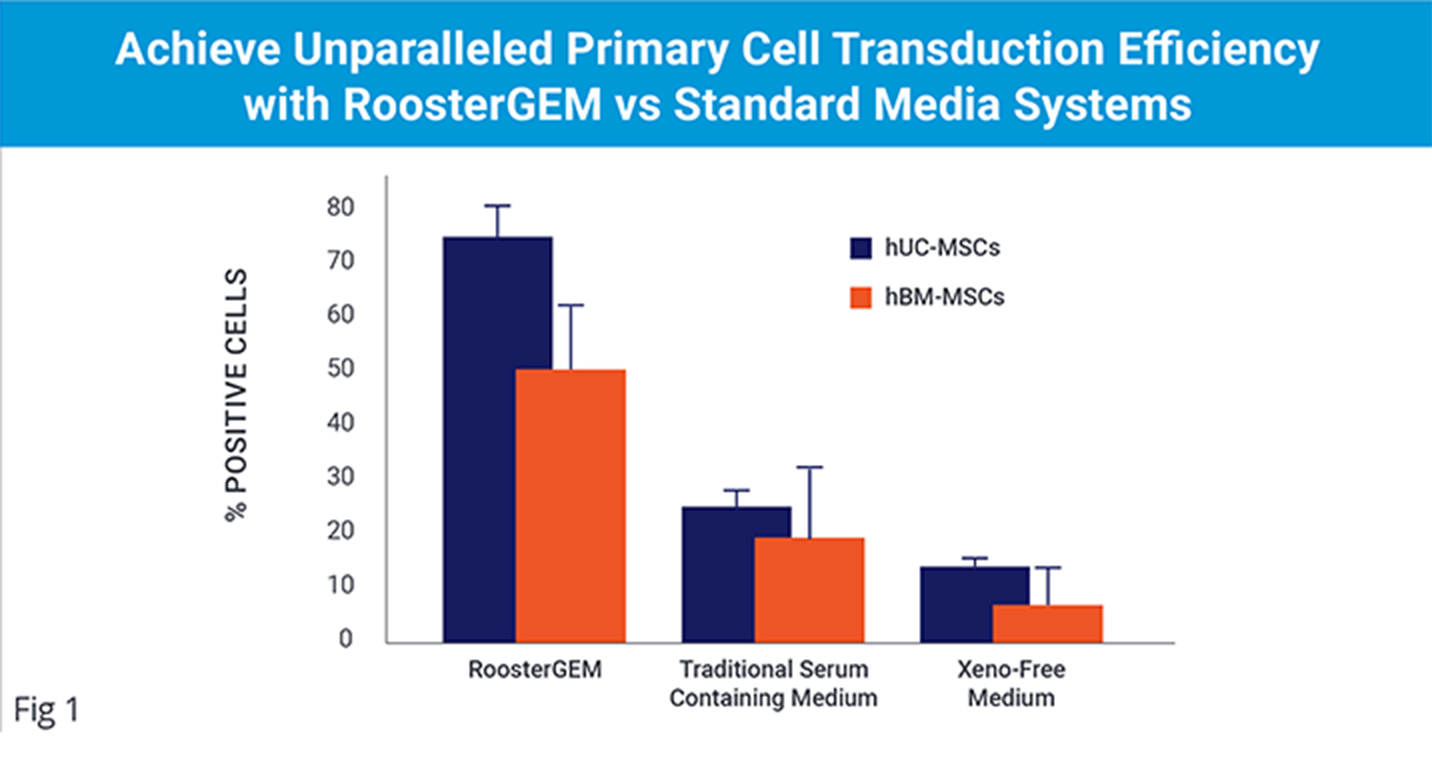 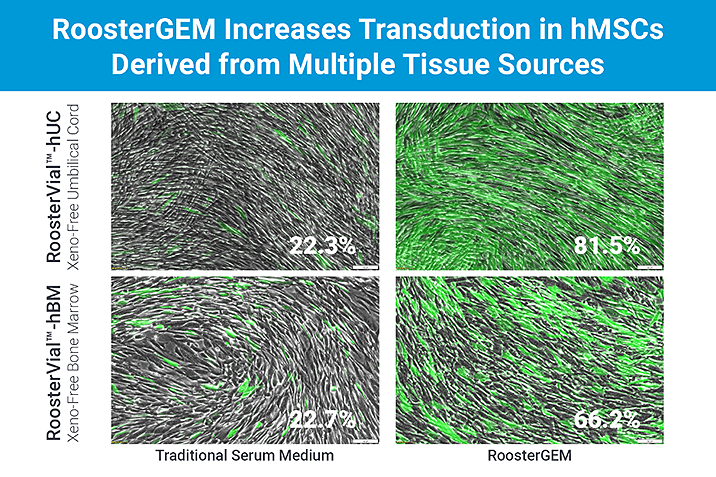 Although originally developed with a focus on hMSCs and LV, RoosterGEM’s potent enhancement of transduction efficiency can also be applied to a broader range of clinically relevant, primary cell types and gene transfer toolkits. In addition, RoosterGEM is readily translatable into a cGMP-compliant version that RoosterBio now has in development.

In fact, gene-modified hMSCs produced using RoosterBio’s platform can be the ideal cellular “chassis” for rapidly prototyped lead products manufactured using a drop-in, accelerated production process. Designed and tested engineered gene sequences assembled into bifunctional “apps” and “app systems” can be delivered into the hMSC cellular genome, after which the enhanced cells can be expanded and deployed.

This process could be adapted to a “plug-and-play” GMP process to produce off-the-shelf, clinical-grade hMSC materials. MSCs from a donor bank would be transduced/transfected with the gene apps and yield cells that would be expanded and frozen as pre-expanded doses. Those pre-doses would, when needed, be expanded to the final dose and then delivered to the patient for infusion.

2021 Roundup: The Year of Cell and Gene Therapy

Expanding the Cell and Gene Therapy Ecosystem in Philadelphia