Following a busy few years of acquisitions, Olon has announced the creation of a major new global research and development (R&D) hub at its headquarters in Rodano, Italy, which will form the center of its network of R&D sites, increasing collaboration, innovation, and synergy across the diverse teams of research experts and setting the stage for future growth prospects. Olon’s Senior Vice President of Research & Development Giorgio Bertolini, Ph.D., met with Pharma’s Almanac Editor in Chief David Alvaro, Ph.D., to discuss the vision for the R&D center and what it means for the future of the company.

David Alvaro (DA): To begin, can you update us on some of the recent growth trajectory at Olon?

Giorgio Bertolini (GB): Over the last few years, Olon has grown considerably through a series of acquisitions, although we have had strong organic growth as well. We are still looking at other acquisitions in specific areas where we either lack capabilities or in which we want to expand our presence, and we are already in discussions about some new acquisitions.

With regard to internal growth, we are investing in adding new capabilities and increasing capacity in some key areas, particularly for highly potent APIs. With the recent growth in understanding of the biological mechanisms behind some diseases — particularly cancers — there has been an explosion in the development of APIs that are very selective but also very active. For these APIs, we need to both protect operators from the exposure to the API and protect the API from potential cross-contamination. As such, high containment is extremely important, and we have invested heavily in building up new plants in Italy for the production of larger-scale highly potent APIs. While this may seem like a contradiction because a small amount of highly potent APIs is typically needed, indications like cancer treatments target a very large population of patients, so even when you only need a small dose of API for each patient, at the end of the day the program calls for hundreds of kilograms of API.

We have just inaugurated a new large-scale highly potent production plant in Italy, and we are also investing in our Olon Ricerca site in Ohio. We are building two different suites for highly potent APIs: one is at the hundreds of grams scale and the other is an isolation system for the production of tens of kilograms.

Additionally, we are investing in capabilities for ultra-high-potency APIs, which are typically the payload molecules for antibody–drug conjugates. Handling these even more potent APIs requires a real jump in terms of technology. For this reason, we have also designed and begun construction of a new plant in Italy for the preparation of payloads or payloads-plus-linkers for the production of antibody–drug conjugates.

Regarding our growth in our Biotech division, we are also reinforcing our technology for supporting the recombinant production of biologically active therapeutic peptides. 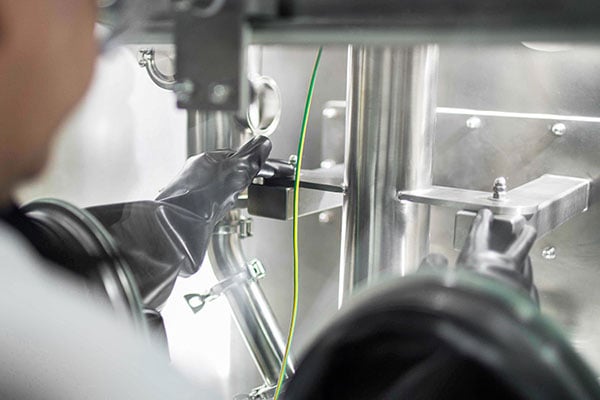 DA: Before we discuss the new R&D center you are building in Rodano, Italy, can you explain Olon’s current network of R&D sites and how those operations have functioned?

GB: It’s probably best to begin with some of the history there. When we began to grow the company through acquisitions, there were two different options for R&D: to build up a single R&D center for the entire group or to set up a decentralized system comprising medium-sized R&D groups in nearly all of our global sites. We decided to follow that second option, which means that at the moment we have many R&D sites that are spread across our worldwide network, sitting in almost all the production sites that we have. We currently have seven R&D sites in Italy, as well as one in Spain, one in the United States, and one in India.

The strategy behind that decision was driven by a few considerations. First, with a single R&D center, when you create or invent a new process or optimize an existing one, you are not directly connected with the relevant production operations that will execute that process, so you may end up with a very nice scientific approach, but one that is not really scalable. Having those R&D teams located close to or integrated with the operations teams means that, when they are creating or optimizing processes, they already understand exactly how process will behave during scale-up and at full scale, the potential risks, and so on. As a result, at the end of the day, this decentralized approach allows us to develop properly scalable processes, because they were designed in direct proximity to the actual plant.

The second consideration was the specialized technologies we have at individual manufacturing sites, so by locating an R&D team close to the center of excellence for each specific technology, they can truly become experts in designing new processes for the application of that particular technology.

For example, at our Segrate site, we have extensive cryogenic capabilities, so we have an R&D team in Segrate that is fully dedicated to cryogenic reactions that must be run at very low temperatures using organometallic reagents and is positioned to design processes that can be easily transferred to the plant. At our site in Murcia, Spain, we have the technology to handle large-scale bromination and cyanation reactions, so the R&D team in Spain is specialized in bromination and cyanation.

However, while our decentralized approach provided us with those benefits, we felt that they may come at the expense of cross-fertilization between the individual R&D groups since they are sitting so far apart. Of course, technology like Microsoft Teams allows us to have normal conversations regardless of geography, but we felt like we needed to go beyond that to create a better system to increase collaboration. We decided that we should create a single R&D center in Rodano that could be the main point of contact to synergize the diverse expertise sitting in all of the decentralized R&D centers, working as a real hub that connects the spokes of those site-based R&D teams and creates more opportunities for cross-fertilization.

DA: Beyond this key role in integrating and synergizing all the other centers, will the Rodano R&D center have any specific research areas of focus?

GB: Our primary focus is to increase process safety across our operations, and we will continue activities to collect information to allow us to optimize safety. The next priority is to collect more information to guarantee a smooth scale-up of processes. We will be building a large lab containing a great amount of equipment, as well as software to simulate critical process parameters — for example, stirring or heat transfer in large-scale reactors compared with smaller vessels in the lab. We will collect data in the lab and use software to predict behavior at larger process scales.

The process safety and scale-up research performed there will be a hub for all of those activity across the group. There will also be a strong new analytical R&D team to support all of the smaller analytical groups that are present in each R&D team.

Because this is a scale-up lab, we will install a range of new equipment, including a flow reactor, since we currently have some flow reactors in one site or the other. Flow chemistry, photochemistry, electrochemistry, and bioconversion will be the four main topics and represent a new area of development in the new R&D lab.

DA: Will the establishment of this new center also trigger organizational changes across R&D operations?

GB: The ultimate goal is to work more on projects — and new kinds of projects. At each site, we have people who specialize in a certain technology. But sometimes a project needs to combine more than one of these technologies — for example, both cyanation and cryogenic reactions. There will be a team working on one of these technologies in Spain and a team working on another technology in Segrate, and both will be managed by a project manager in the new R&D hub. So, this will be a real change in project management for these kinds of projects. Rather than handling the entire project locally, it will be run from the R&D hub and will coordinate the specialized method experts from the group at each site. This will impact the way that we approach the development of new processes, scale-up, and optimization.

It will increase the size of our R&D team. At the moment, we have a team of about 300 R&D experts, but this new site will add 40–50 people, which will be considerable growth in terms of the number of researchers. 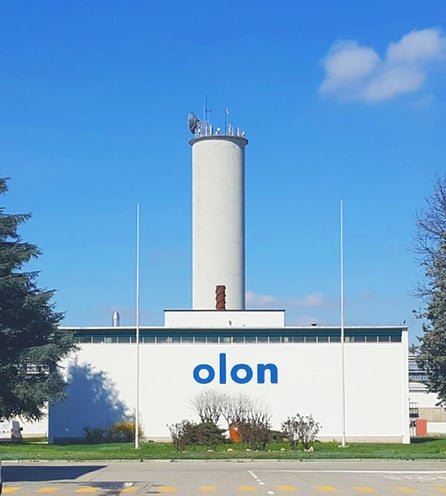 DA: Will the R&D hub also support further acquisition, making it easier to bring in a new site and align it with the rest of the group?

GB: Yes, exactly. We are thinking of this R&D center as an open hub that will be able to accommodate and integrate any potential new acquisitions that occur in the future. We may acquire additional sites in the United States or China, for example, which will have their own R&D teams working within this network. When we add on more sites, we will just expand the number of spokes. But at the end of the day, the central hub will manage all the projects and synergize our expertise.

DA: Can you share more details about the size of the investment and the projected timeline for the R&D hub?

GB: The starting investment for construction, the first step, will be €10 million. In the following years, there will be additional investments in things like photochemistry equipment. We broke ground on the center on May 26, 2022. We expect the center to be fully operational by mid-2023.

DA: What will likely come next in Olon’s future growth trajectory, and will the establishment of the R&D center enable you to grow in new and different ways?

GB: The new R&D hub will definitely help to spur further growth. The integration will allow us to access more science. Our new structure, which will still be decentralized but also integrated, is pretty unique in the industry, but we think that it will provide a significant advantage for both our internal R&D and our customers, for both the CDMO business and the generic API business, because we can not only leverage the expertise of real experts from each site but combine them and work as a single group. I think that in this case we have a great benefit in terms of the growth of our business. But this will be just the starting point; it’s not just a standalone exercise. This will be an inflection point that will boost the growth of the company. 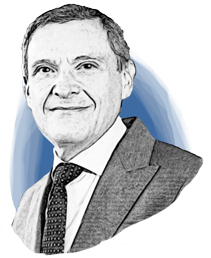 Dr. Giorgio Bertolini studied chemistry at University of Milan with a thesis on stereoselective electrophilic amination and aldol condensation in the labs of Prof. Cesare Gennari. Then he moved to Polytechnic of Milan to complete his education at the Specialization School of Organic Synthetic Chemistry. He subsequently undertook postdoctoral research with Professor Barry M. Trost at Stanford University, where he worked on selective modification of steroids. In 1987, Giorgio joined the research laboratories of Zambon, where he started his industrial carrier as Medicinal Chemist in lead generation, hit identification, and optimization. After 12 years in medicinal chemistry, he became Process Chemistry Director of the Italian sites of the Clariant Life Science Molecules Business Unit. Following 20 years of experience in process chemistry in different companies, he is currently Senior Vice President Research & Development at Olon Group. Giorgio is now responsible for all the innovation activities of the group for both fermentative and chemical processes with particular focus on recombinant peptides, highly potent APIs, continuous processes, bioconversion, photo- and electrochemistry, and hazardous chemicals. Giorgio is currently vice-chair of the Innovation Committee of the European Fine Chemical Groups (EFCG) and member of the board of the Organic Chemistry Division of the Italian Chemical Society. He is the author or co-author of more than 70 patents and around 30 publications on major international Journals.