Doping remains a constant threat to the ethics and values in professional sports, as well as on the amateur level. Substances like anabolic steroids, erythropoietin (EPO) and human growth hormone (HGH) are only a few of the many substances used to tamper with the human body to illegally increase strength, stamina and overall performance.

What is Doping? Influence on Amateur and Professional Sports

Per the United Nations Educational, Scientific and Cultural Organization (UNESCO), “Doping refers to an athlete’s use of prohibited drugs or methods to improve training and sporting results.”1 Performance enhancement starts as early as high school, with students turning to performance enhancing drugs (PEDs) to increase their chances of earning scholarships to colleges and universities. A study conducted by the Partnership for Drug-Free Kids in 2013 showed that 11% of teens in grades 9–12 reported having used synthetic human growth hormone (2012: 5%), while 7% used steroids to enhance their performance.2

While illegal performance enhancements in sports can be dated back all the way to ancient Greece,3 doping, as we know it today, has exponentially evolved over the last 30 years. With the development and advancement of medicine, it is more present in athletics than ever before. Ben Johnson, Lance Armstrong and Alex Rodriguez are only a few of the big-name professionals whose reputations have been tainted by the illegal use of PEDs in recent years.

« Anabolic Steroids  While there are many different methods and drugs used in doping, anabolic steroids are the first that come to mind when talking about performance enhancement. Anabolic steroids are the synthetic version of the primary male hormone testosterone. The androgenic part of testosterone is responsible for typical male characteristics, such as the development of male genitals, growth of body and facial hair and the deepening of the voice.

The anabolic part, however, increases bone and muscle mass, helps athletes recover faster and reduces muscle damage by activating the androgen receptors mediated signaling, which stimulates both protein synthesis and erythropoietin production.4 While all steroids have androgenic and anabolic effects, anabolic steroids used for performance enhancement have been altered significantly, thus minimizing the androgenic effects of the drug. They can be applied to the skin as a cream or patch, taken orally as a pill or injected directly into muscle.

One of the most prominent cases of anabolic steroid doping involved Canadian sprinter Ben Johnson at the Summer Olympics of 1988 in Seoul, South Korea. Johnson broke the world record, running a stunning 100 meters in 9.79 seconds.5 Everyone was in awe as the Canadian seemed to fly away from the competition — only to find out 48 hours later that Johnson had tested positive for Stanozolol (also known as Winstrol), an orally active synthetic anabolic steroid.

A study conducted by the Partnership for Drug-Free Kids in 2013 showed that 11% of teens in grades 9–12 reported having used synthetic human growth hormone (2012: 5%), while 7% used steroids to enhance their performance.

Formed by the condensation of the 3-keto-aldehyde moiety of oxymetholone with hydrazine and androgenic activity, the drug stimulates fat loss, helping to maintain lean body mass.6 The discovery of Johnson’s steroid use sent shock waves through the sporting world. Even though the Canadian wasn’t the first, or even the only, sprinter in the race to use PEDs, the excitement surrounding his win and world-record time made this one of the most infamous doping cases of all time.

« Blood Doping  After denying the allegations for several years, seven-time Tour de France champion and Olympic bronze medal–winner Lance Armstrong admitted to using several PEDs over the course of his career in a 2013 interview with Oprah Winfrey.7 One of the main methods used by the American cyclist was blood doping, defined by the World Anti-Doping Agency (WADA) as “the misuse of certain techniques and/or substances to increase one’s red blood cell mass.”8

Synthetic oxygen carriers are purified proteins or chemicals, separated into hemoglobin and perfluorocarbon-based carriers. Hemoglobin is a tetrameric protein responsible for the transport of oxygen from the lungs to other tissue, while perfluorocarbons are chemically synthesized compounds with fluorine atom backbones.10

While tests detecting EPO and synthetic oxygen carriers have been implemented successfully over the last decade, autologous blood doping (the transfusion of one’s own blood which has been stored until needed) remains to this day undetectable. All three methods have the same effect: by increasing the number of red blood cells in the human body, the amount of oxygen which the blood can carry to the body’s muscles increases, resulting in the improvement of stamina and overall performance.

« HGH  Although performance enhancement in baseball has been an open secret for many years, serious testing did not start until the publication of the Mitchell Report, an independent investigation done on behalf of Major League Baseball by Chief Investigator George Mitchell in late 2007. This report stated that many players, including superstars Barry Bonds, Mark McGwire and Alex Rodriguez, have used PEDs such as anabolic steroids and/or human growth hormone (HGH).11 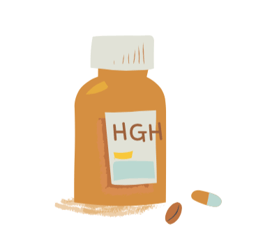 As stated by the World Anti-Doping Agency, HGH “is a hormone that is naturally produced by the body. It is synthesized and secreted by cells in the anterior pituitary gland located at the base of the brain.”12 The hormone exists as a complex combination of different molecular forms, including the major 22-kDa and minor isoforms such as the 20-kDa. It stimulates many metabolic processes in cells, affecting protein, fat carbohydrate and mineral metabolism. Hence the attraction for its use as a doping agent: it is said to reduce body fat, increase muscle strength and help speed recovery of the musculoskeletal system.12

Doping Remains a Threat to Values and Ethics of Sports

Even though successful tests have been implemented over the last decade, the illegal use of performance-enhancing substances remains a threat to the values and ethics which professional sport embodies. In a study conducted by the U.S. Anti-Doping Agency, 68% of all interviewees in the U.S. named the use of PEDs as the most serious issue facing sports today.13 With the continuing advancements made in medicine and science, the use of PEDs will likely increase in the coming years. WADA’s mission, “to lead a worldwide movement for doping-free sport,”14 seems more crucial than ever before.

Marc has been a long-time friend of Pharma’s Almanac and has helped on numerous projects, such as editing texts and contributing to several strategic and journalistic articles. Marc has over seven years of experience in communications and holds a Master’s Degree in Arts from the University of Fresenius. He resides in Cologne, Germany.

Mental Health During a Global Pandemic

Reflecting on COVID-19 in Germany