KANSAS CITY, Missouri – CRB, a leading global provider of engineering, construction, consulting and architecture solutions to the life sciences and food and beverage industries, announced today it has appointed Courtney Holt as General Counsel. Holt succeeds Jim Scott, who will retire later this year after eight years as CRB’s in-house counsel and several years before that as outside counsel. 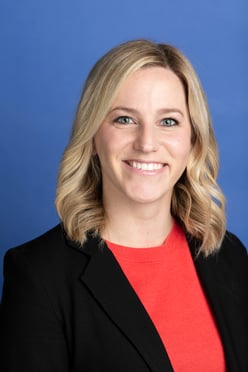 Holt, a 2011 graduate of the University of Missouri-Kansas City School of Law, joined CRB in 2018 as Assistant General Counsel, responsible for a broad range of legal matters including contracts, disputes, corporate law and governance, compliance, employment, and other areas of law relevant to the company's business. In her new role, Holt will direct all aspects of CRB's legal affairs, ensuring compliance for the company’s policies and business activities and advising the management team about business impacts. Holt already works closely with senior leaders to ensure CRB’s legal and contractual needs are met, including the development and implementation of risk management strategies that support CRB's continued growth.

During his tenure, Scott developed and mentored a structured and highly successful legal team, including the hiring of Holt, and has been instrumental in building a strong governance model at CRB. He became a Senior Associate of the company in 2019 and played a critical role in the integration of CRB's design and construction teams into a single entity in 2021.

“Jim’s mentorship has been instrumental in not only my personal development, but also the development of the legal group's role here at CRB. I will do my very best to live up to the high standard he has set,” Holt said. “My focus will be on leading an approachable and agile team that provides timely, knowledgeable, and trusted advice to the organization.”

CRB is a leading provider of sustainable engineering, architecture, construction and consulting solutions to the global life sciences and advanced technology industries. Our more than 1,600 employees provide best-in-class solutions that drive success and positive change for our clients, our people and our communities. CRB is a privately held company with a rich history of serving clients throughout the world, consistently striving for the highest standard of technical knowledge, creativity and execution.