Combating Cancer and Other Diseases with Supercharged NKT Cells

Natural killer T cells (NKTs) bridge the innate and adaptive immune systems and are increasingly being studied to treat cancer and microbial diseases. AVM Biotechnology is exploring its novel and proprietary formulation of dexamethasone to supercharge NKTs for a range of indications, including as a potential first choice for terminal, no-option cancer.

AVM Biotechnology (AVM) was founded in 2008 to develop drugs to optimize stem cell performance in the human body.

Through years of experience working in the industry, it became widely understood that, if the body is not suitably prepared for regenerative treatment, cell therapy will prove ineffective. Traditional preparatory treatments such as chemotherapy also have high levels of toxicity. AVM set out to discover and understand how the body controls stem cell movement, as well as understanding how stem cells interact with controlling organs. In essence, AVM aimed to optimize regenerative medicine.

In 2015, following the loss of the founder’s son Henry to Burkitt’s lymphoma at the age of 14, the company began investigating pediatric cancer. Pediatric cancer patients generally do not have access to the latest biologics that have proven effective in many patients, and thus standard cancer treatment options like chemotherapy, with its high toxicity profile, continue to be the industry standard, with mixed results. This loss fueled the company-wide mission to deliver underserved populations with therapeutics that have a favorable risk-to-benefit ratio. Through its years of research and development, AVM has evolved and is currently positioned to meet its goal of providing hope to patients for whom all other treatments have failed through
its lead product, AVM0703 — named in tribute to the date Henry succumbed to this illness.

AVM0703 is a novel and proprietary formulation of dexamethasone that is formulated to be provided at a high dose. AVM’s research shows that the AVM high dose of dexamethasone mobilizes the body’s natural, supercharged immune cells that are 10 times more activated than ordinary immune cells. The AVM formulation lacks the excipients that could be toxic if a high dose of currently available dexamethasone is administered. This formulation is designed to eliminate many of the stabilizing agents while maintaining an impressively long shelf life of at least 36 months.

AVM0703 is administered via a one-hour IV infusion, with a retreatment option, if needed, after 28 days. Having demonstrated activity in mouse models against aggressive, impossible-to-cure cancer models, AVM also showed that, when used as an adjunctive therapy, the dosage of common toxic chemotherapies can be reduced. Preclinical animal studies have shown AVM0703 to spare platelets, red blood cells, and stem cells, which chemotherapies are known to damage — and thus could reduce the need for blood transfusions. This may also be a cancer treatment option for people who do not want blood transfusions. AVM0703 has received FDA permission to proceed with clinical trials for the treatment of lymphoid malignancies, particularly relapsed, refractory non-Hodgkin’s lymphoma, and will begin enrolling patients before the end of 2020. The trial’s adaptive design will enable AVM to move through clinical trials as rapidly and as safely possible.

AVM0703 did not begin as a cancer-killing initiative. It was originally developed to prepare patients to receive regenerative medicine stem cell therapy, but these novel NKT immune cells entering the bloodstream were found during preclinical research as higher doses were examined. The novel NKT cells are programmed by nature to kill abnormal cells like cancer and virally infected cells. This epiphanic discovery facilitated a pivot away from regenerative medicine to focus on relapsed refractory and “no-option” cancer patients.

The mechanism of action that enables AVM0703 to work against aggressive cancers may also prove effective against COVID-19 and other microbial diseases. To further that research, AVM has received permission to proceed with a clinical trial for the treatment of acute respiratory distress syndrome (ARDS) mediated by COVID-19 or influenza. The NKT cells that are triggered by AVM0703 are programmed by nature to kill abnormal cells. While AVM believed that HIV would be the first viral application, the COVID-19 pandemic presented a new opportunity to leverage AVM0703 in the fight to eliminate SARS-CoV-2–infected cells in severely ill COVID-19 patients for whom all other treatments have failed. AVM is also exploring AVM0703 as a therapeutic for type 1 diabetes with encouraging results and additional applications.

For patients who cannot enroll in the clinical trials, AVM provides AVM0703 through its compassionate use program (CUP), enabling physicians to treat patients that have exhausted other treatment options or do not meet the criteria to enroll in a clinical trial.

The AVM Team and Future Outlook

The team is comprised predominantly of female scientists and researchers who have come from all over the world since its founding — including Uganda, Togo, the Philippines, Vietnam, Japan, France, Germany, Pakistan, and India, with other employees from various regions in the United States. This diversity is paramount in achieving the company’s goals, as leveraging different perspectives to overcome challenges is what has made AVM Biotechnology successful. They are thrilled to have assembled a team of strong, skillful professionals including COO Janet Rea, with over 35 years of experience in manufacturing, regulatory, quality, supply chain, and clinical trials. However, this strength is also a weakness — women-founded biotech companies are often faced with disproportionate challenges compared with more traditionally male-led biotech companies, who receive venture capital funds at a sevenfold higher rate. The company is hopeful that AVM’s success to date and the success that they hope to achieve in clinical trials and eventual commercial launch will spur change in the way venture capital firms pursue opportunities with female-led companies.

The goal is to bring AVM0703 to the U.S. market within the next three years and to partner for worldwide development. AVM Biotechnology can envision an Initial Public Offering (IPO) within the next 3–5 years. AVM is an exciting company with an even more exciting drug and are confident that once they can prove safety and efficacy with AVM0703, they will also be able to go to market with other products that are currently in development.

AVM’s team of scientists are wholly dedicated to changing what cancer, autoimmunity, and chronic infectious disease diagnoses mean to patients and their families. The company’s mission is fueled by its passion to deliver drugs that work rapidly, safely, effectively, and affordably — treating life-threatening conditions when all other treatment options have been exhausted and seemingly failed. They serve overlooked populations — pediatric and adolescents, frail and elderly, and those who have failed all other options. AVM’s products improve clinical outcomes without additional suffering in the form of side effects, because they believe that treatments should never be worse than diseases themselves. 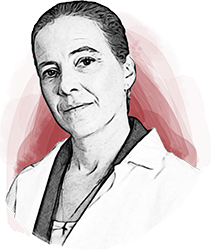 Theresa A. Deisher, Ph.D., graduated from Stanford University School of Medicine with a doctoral degree in molecular and cellular physiology. She has 47 issued patents and four discoveries in clinical trials. Dr. Deisher has extensive scientific and management experience in the commercial biotechnology field at Genentech, Repligen, ZymoGenetics, Immunex, and Amgen. Since 2008, she has led a team of innovative scientists at AVM Biotechnology who have developed AVM0703, a drug with a novel mechanism of action that mobilizes the body’s own natural immune cells to fight blood cancers, solid tumors, and infectious disease such as COVID-19 and influenza-mediated ARDS.

Changing the Paradigm of Cancer Drug Discovery and Development with Plants