By leveraging the immune system, immunotherapies hold promise as treatments for diseases ranging from AIDS to cancers of all types. While most major pharmaceutical companies are engaged to some extent in immunotherapy discovery and development, emerging companies are leading the way.

Combinations of drugs operating via complementary mechanisms of action often provide optimum results. Collaboration is therefore essential to accelerating the development and commercialization of these promising medicines.

Immunotherapies — drugs that activate and leverage the killing ability of the immune system for targeted harmful cells — have recently moved from the realm of imagination to reality. Regulatory agencies have approved several different types of immunotherapies targeting cancer and other diseases. One of the latest to be approved by the U.S. Food and Drug Administration was Libtayo (cemiplimab) from Regeneron Pharmaceuticals and Sanofi for the treatment of patients with a certain type of skin cancer. Just days after this approval, James Allison of MD Anderson Cancer Center in Houston and Tasuku Honjo of Kyoto University in Japan received the 2018 Nobel Prize for Physiology and Medicine for their independent research efforts in the field of immunotherapy.1

Sales of the leading cancer immunotherapies are doing quite well, indeed.4 Revlimid® (lenalidomide) from Celgene earned the third-highest revenues in 2017 at $8.187 billion. Opdivo and Yervoy earned Bristol-Myers Squibb $4.948 billion and $1.244 billion, respectively, while Keytruda raked in $3.809 billion for Merck. Roche’s Tecentriq is catching up, with 2017 sales of $510 million.

Most big pharma companies have immunotherapy programs. Leaders include Merck, Bristol-Myers Squibb, AstraZeneca and Roche (through its biologics arm Genentech). All of these companies have established internal R&D initiatives and have formed numerous collaborations with emerging/specialty biotech firms devoted to the development of immunotherapy candidates, government and private institutes and even, in some cases, with their competition.

These collaborations have become essential. Knowledge and understanding of the immune system and the biochemical pathways involved are evolving rapidly. It is impossible for one company to remain up to date on all recent advances achieved by academia, government and industry research groups. Equally important has been the rise of start-up biotech firms focused on the development of immunotherapies for specific diseases with business models that involve commercialization via collaboration.

It is also becoming apparent that many immunotherapies are most effective when used in combination with other drugs operating by complementary mechanisms of action. No single pharmaceutical firm has access to a sufficiently wide array of approved drugs and drug candidates to ensure development of optimal immunotherapies. Therefore, companies with known technological expertise are partnering with other firms — including their biggest rivals where appropriate — to test combinations of their approved products and lead candidates to expand the list of indications — and thus the profit potential — of their drugs.5

Common approaches involve the use of established chemotherapy drugs with antibody-based immunotherapies that boost the immune system response. As a result, while there are many collaborations that solely focus on discovery and early development, the number of partnerships involving clinical trials has increased significantly.6

New partnerships and deals seem to be announced on a near-daily basis. Many of these collaborations are between specialty biotechs that have developed proprietary platform technologies for specific types of immunotherapies, such as CAR-T cell therapies (e.g., JUNO Therapeutics, Bluebird Biosciences). Many have business models that require collaboration with mid-sized or large pharmaceutical companies to implement late-stage clinical trials and commercialization.

According to a report in Genetic Engineering News (GEN) in March 2018, the top ten ongoing collaborations in immunooncology were worth approximately $34.513 billion, nearly one-third higher than the value of the top 10 deals from the publication’s 2017 list.4 The structure of deals is also changing, with buyers willing to make large up-front payments ($4.368 billion in 2018 compared with $2.743 billion in 2017). Two of the top three deals were launched in 2018, and all of the collaborations on GEN’s 2018 list were valued above $2 billion. Key points about the top 10 deals on GEN’s list are shown in Table 1. 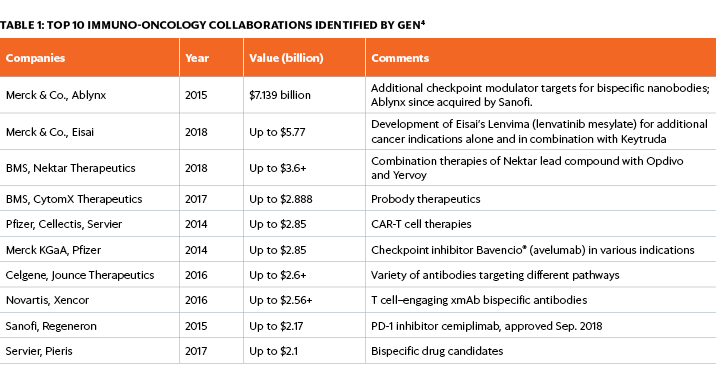 These large collaborations are clearly not the only partnerships that are driving the advancement of the immunotherapy field. Many leading researchers in academia, industry and government institutions have recognized that, to best leverage the large quantities of data and information being generated today, there is a need to collaborate in nontraditional ways.

The imCORE Network was launched by Roche in 2016 to bring together leading scientific and clinical experts in cancer immunotherapy to collaborate and share and aggregate data in order to accelerate drug development and more rapidly initiate preclinical and clinical research for novel immunotherapies, according to the company.7 The global research network comprises 26 leading cancer research institutions from 10 countries across the world and is being funded by Roche to support basic and clinical research collaborations. Roche and Genentech are working in collaboration with the network on existing and new investigational medicines, diagnostic technologies and emerging data.

imCORE research is performed within a common scientific framework with streamlined operational processes, patient enrollment and data collection, enabling rapid movement between preclinical, clinical and translational research and shorter study timelimes.7 Ongoing projects range from preclinical studies to better characterize immune phenotypes (tumor profiles) of cancer and mechanisms of immune response and escape to clinical trials evaluating new therapies and novel combination strategies, according to Roche. “By supporting pre-clinical and clinical research, imCORE seeks to drive innovation from the lab to the clinic and back again in a continuous ‘learning loop.’ This approach informs clinical trial design by helping researchers to better select treatments — both monotherapy and combination therapies — that are most likely to benefit individual patients,” the company says.

The Parker Institute was founded in 2016 to provide a means for overcoming the risk-averse nature of traditional drug development and is focused on cancer immunotherapy, including novel drug development and the development of combination approaches that increase the effectiveness of existing drugs.8 Its director is 2018 Nobel Prize winner James Allison.

The Institute’s fundamental model is one of collaboration with its member researchers, other nonprofits and companies across the range of the biotech and pharma industry. Working with these partners provides the opportunity to push the boundaries in cancer therapy in innovative ways that are not possible without the collaborative effort of multiple parties coming together through the Parker Institute, according to the organization.

Data and new bioinformatics tools are shared between the network without any intellectual property concerns so that researchers can build upon each other’s work. Access to funding eliminates the need to spend time applying for grants. Researchers in the network can conduct joint clinical trials with standardized data collection and operational protocols.

Strategic partnerships with biopharma companies are also designed to speed development and commercialization. Licensing deals are arranged at the latest stages of the R&D process and are implemented by in-house IP experts. Any monies generated from patented discoveries are shared 50–50 between the research centers and the Institute, which invests the money in more programs.

In the United States, finding cures for cancer has become a top priority of the government. The 21st Century Cures Act (2016) authorized $1.8 billion to fund the Cancer Moonshot initiative to accelerate cancer research over seven years.9 The NCI established a blue-ribbon panel to recommend programs based on the latest knowledge in the field.

One of the first subsequent actions was to establish the Cancer Immunotherapy Research Network (CIRN) to develop immune-based approaches for the treatment and prevention of cancer in adult patients. A similar network was established for the development of immunotherapies for childhood cancers.

In October 2017, the NIH also launched — in partnership with 12 biopharmaceutical companies — PACT, a five-year public–private research collaboration totaling $215 million, as part of the Cancer Moonshot initiative.10 Managed by the Foundation for the National Institutes of Health (FNIH), PACT is focused on identifying, developing and validating robust, standard biomarkers and biomarker assays that will provide better understanding on how immunotherapies work and enable prediction of patient responses to different treatments. To do so, PACT will facilitate systematic and uniform clinical testing of biomarkers and integrate biomarkers into clinical trials to advance understanding of the mechanisms of response and resistance to cancer therapy, according to the NIH. A portion of the PACT funding supports four Cancer Immune Monitoring and Analysis Centers (CIMACs) and a Cancer Immunologic Data Commons (CIDC) over five years that will form a network of laboratory centers to support both adult and pediatric immunotherapy trials.10

“A scientific and organizational challenge as complex as this cannot be addressed effectively by any one organization acting alone. It requires the energy and intellectual and financial resources of multiple partners working together in close collaboration. PACT is a significant step forward in ensuring that new immunotherapies find their way to patients that will benefit the most and to developing even more powerful treatments that harness the immune system and that target specific molecular pathways to attack cancer. We are proud to be working as partners to leverage the collective expertise, capabilities and resources necessary to make these promising advances in cancer research, and hopefully transform the lives of cancer patients,” says David Wholley, Senior Vice President of Research Partnerships at the FNIH.13

Well before the Cancer Moonshot initiative, the NCI formed the Experimental Therapeutics Clinical Trials Network (ETCTN) to leverage partnerships with the pharmaceutical industry, academic institutions and individual investigators for the early clinical evaluation of innovative cancer therapies. The Cancer Immunotherapy Trials Network (CITN) was established in 2010 in collaboration with the Fred Hutchinson Cancer Research Center (FHCRC).11 The consortium of leading investigators and institutions with expertise in tumor immunology and cancer immunotherapy are focused on developing and implementing early-phase clinical trials in this field. The CITN also supports the performance of standardized immunomonitoring assays and correlative studies using specimens obtained from clinical trials to investigate the biological mechanisms of the disease and drugs that will enable further development. Collaboration between member institutions, industry sponsors and philanthropic foundations accelerates the design and implementation of clinical trials, according to the FHCRC.