Biologic drugs are formulated with a range of biologic drug substances. Established active biomolecules include engineered proteins and antibodies, hormones and growth factors, peptides and enzymes. Next-generation biologic drug substances include cell and gene therapies, antibody–drug conjugates (ADCs) and bi- and multi-specific antibodies. While these biomolecules can vary significantly in terms of their structures and properties, they are generally produced using a limited number of production methods.

Some biologic drug substances are extracted from plasma or other biological materials. Most, however, are produced using mammalian cell culture or microbial fermentation. There is also growing interest in alternatives to mammalian cell culture, including bioprocessing using plants and insect cells.

In all of these cases, the cells are engineered to produce the desired biologic drug substance in the highest yield and purity possible. Access to CRISPR/Cas9-based genome editing technologies is enabling the engineering of all types of expression platforms with enhanced properties and performance and new functionalities.1

Just a decade ago, microbial fermentation was relied upon heavily for the production of recombinant proteins.2 Since that time, there have been tremendous gains in the efficiency of cell culture. As a result, by 2018 nearly 70% of biologic production capacity in terms of volume (excluding blood/plasma products) was based on mammalian cell culture, primarily in Chinese hamster ovary (CHO) cells.3

Cell culture remains the fastest growing segment of the biologics market, mainly due to ongoing advances in cell-line development.1,4 In addition, mammalian-expressed biologics account for the greatest percentage of candidates in the biopharma pipeline. As a consequence, both pharmaceutical companies and contract service providers continue to invest in additional cell culture manufacturing capabilities, particularly in single-use systems with smaller footprints and solutions that enable process intensification for greater efficiency and productivity.

E. coli, the most prominent microbe used for fermentation, has been shown to be highly robust and economical for the production of biologic drug substances. Saccharomyces cerevisiae and Pichia pastoris are the most commonly used yeasts for pharmaceutical manufacturing. Interest in P. pastoris has grown due to its combination of prokaryotic growth characteristics and eukaryotic-like PTMs; it is used for the production of vaccines, antibody fragments, hormones, cytokines, matrix proteins and biosimilars.

According to BCC Research, in 2017, the market for microbial-produced biopharmaceuticals was valued at approximately U.S. $100 billion and was expanding at a modest 6% CAGR.6 The markets for microbially produced protein drugs, peptide hormones and vaccines are expected to reach U.S. $60 billion, $28 billion and $19 billion, respectively, in 2020.6

One of the key drivers of growth in the microbial fermentation segment is the development of next-generation biologics, many of which are smaller biomolecules, such as antibody fragments, peptibodies, ADC payloads and small peptide fragments.7 In many cases, CHO cells are not suited for the production these complex substances.

As with cell-line development, advances are also being made in the genetic engineering of higher-performance microbial strains. Typically, engineered microbes are capable of producing large quantities of drug substances at concentrations higher than what can be achieved via cell culture. In addition, the development timelines and costs for microbial fermentation processes can be much shorter than those for mammalian cell culture.8

Several companies, including VTU Technology and Research Corporation Technologies, are developing advanced P. pastoris yeast expression systems for the production of drug substances. These
microbial platform systems include innovations like promoter libraries that allow for the fine-tuning of gene expression by carefully matching promoters and target genes, as well as the genetic deletion of undesired glycosylation pathways, and the introduction of human-like genes that direct the glycosylation process. 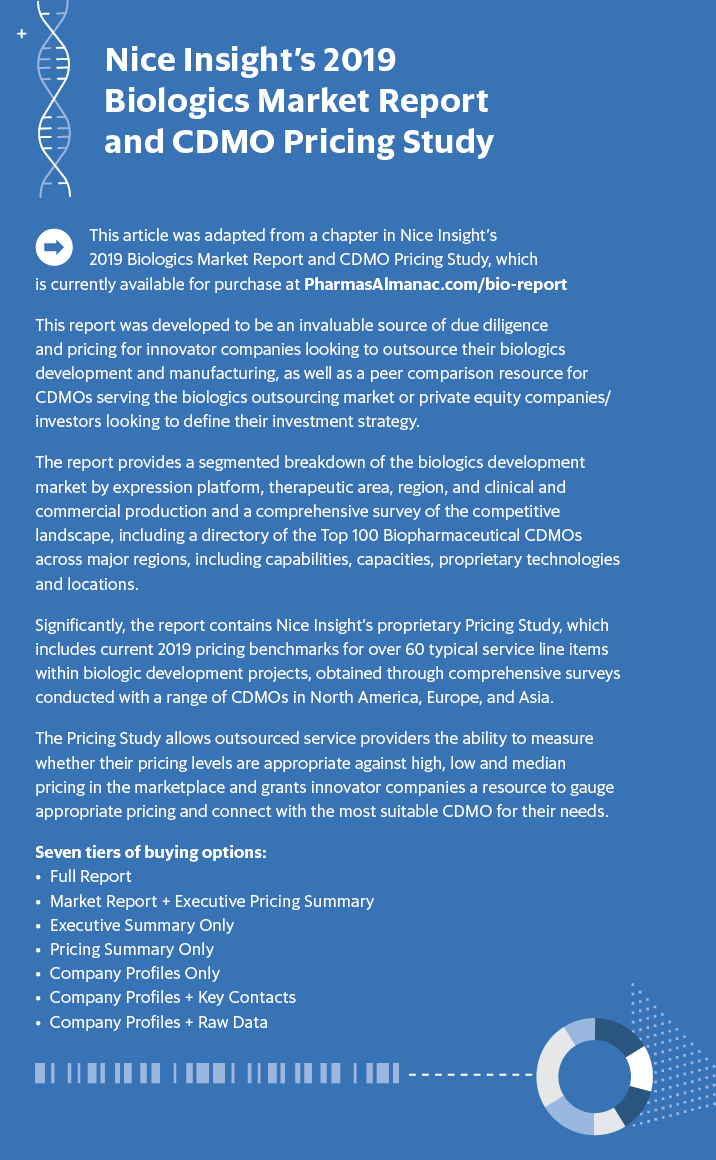 The same limitations of mammalian cell culture driving interest in microbial fermentation — long development timelines, high cost and inability to produce newer, complex non-natural protein formats — are also driving interest in the development of alternative expression platforms for both existing and next-generation biologics.9 Indeed, nearly half of respondents to a BioPharma Reporter survey conducted in late 2017 indicated that the biopharma industry relies too heavily on CHO cell culture for antibody production.1

Expression systems based on plant and insect (Baculovirus) cells have already been proven to yield biologic drug substances that have been formulated into therapeutics that perform in the clinic and meet regulatory approval requirements.9

According to Coherent Market Research, the global cell-free protein expression market, which includes plant-based protein expression, was valued at U.S. $ 177.1 million in 2017 and is expected to witness a CAGR of 6.2% through 2026.10

Therapeutic proteins have been produced in plant-based expression systems for more than 20 years.11 Human trials were first conducted in the late 1990s, and since then, antibodies, vaccines, enzymes and other therapeutic proteins have been developed by several companies, including iBio Inc., Protalix BioTherapeutics, Medicago, Icon Genetics and Kentucky Bioprocessing; many have reached clinical trials and some achieved regulatory approval.

Plant-based expression systems generally do not require the development and optimization of cell lines for successful large-scale manufacturing.11 Scale-up issues are also non-existent, as producing larger quantities simply requires growing more plants. Concerns over contamination by adventitious agents are dramatically reduced, because no animal-derived materials are used in the process, and plants cannot be contaminated by human pathogens.

iBio Inc. reports that with its technology, the cost of goods for mAb production can potentially be reduced by 50% compared with that for a mAb produced in a CHO system.11 In addition, the company says construction of its facility costs <10% of what it costs to build a typical CHO facility.

Insect–baculovirus systems offer high expression levels similar to those of bacterial fermentation systems yet afford proteins with posttranslational modifications, as well as protein folding, similar to those obtained from mammalian cell expression.12 Like plants, they are also non-pathogenic to mammals. In addition, the cells can accommodate large or multiple genes, and the cells are well suited to growth under suspension cell culture conditions. The proteins are readily isolated from the insect cells via chromatography.