China’s investment in the U.S. biotech sector has had a noticeable impact on the industry. So far, Asian investment has accounted for $4.2 billion in private biotech, or 43%. Considering that in 2016 this amount was just 11% in total, the rise in foreign venture capital dollars backing U.S. biotech is significant, to say the least.1

The reason behind this aggressive push is, simply, returns. Chinese investors have experienced tremendous profits in biotech and are now turning to the United States in hopes of even higher margins in the comparatively undervalued sector.

The realistic value of these companies or whether they can prove their worth is (at least for now) not the focus — these start-up biotechs are lucrative because of what they might become. Investment terms are decidedly bullish overseas, and biotechs are contributing to the charge. In China, it’s not rare for companies that haven’t even started clinical trials to receive a $400 million backing.1

The sharp upsurge in investment in U.S. biotech is a result of the Made in China 2025 campaign. This campaign heightens the development and promotion of biotech as a powerful and emerging industry, allowing innovative industries (biotechs being a key example) to receive greater government backing. One of the plan’s overarching goals is for China to position itself as a key global player in pharma; in 2012, China surpassed Japan to become the second largest global drug market; it is second only to the United States.1 Beijing, in particular, is hoping to become a leader in new medicines. The city has flooded capital into U.S. start-ups in the hopes that something will take off and even lifted tariffs on foreign cancer drugs beginning May 1.2

The Made in China 2025 campaign, coupled with a significant rule change on the Hong Kong stock exchange, has created a perfect storm for cash flow into the U.S. biotech sector. According to the new rule, any biotech organization around the world can be listed on the exchange — including those without any revenue. Aside from bringing biotechs together in one place, investors are given the opportunity to invest (and cash out) with relative ease.1

More than a Gold Rush

Of course, by partnering with U.S. biotechs for a shared goal of developing medicines, both nations are relying on the life-saving promise of these treatments. Aside from a biotech “gold rush,” in which relatively small firms are granted multi-billion dollar valuations, whatever therapies are developed in the United States will also be shipped cross the Pacific and made available for Chinese patients.

“If you can cure cancer in New York, why not cure cancer in Shanghai as well? You cannot think of a reason,” Jonathan Wang, senior managing director and co-founder of the Asia fund at OrbiMed Advisors LLC, a healthcare investment firm that backs early biotech companies in both China and the United States, told Bloomberg. “Collaboration is a main trend and goal.”3

Among the major winners to come out of the early stage of Chinese biotech investment is Moderna Therapeutics, a company relying on messenger RNA in drug development. The company is now worth $7 billion after raising an additional $500 million beyond their previous funding this February. Likewise, Pennsylvania-based Harmony Biosciences LLC, which works on CNS disorders such as narcolepsy, received $295 million from Nan Fung Life Sciences, which is the investment arm of Hong Kong conglomerate Nan Fung Group.3

GRAIL Inc., an early-stage cancer-detection company based in Menlo Park, California, raised $300 million in a Series C funding; this investment was led by Ally Bridge Group, a Chinese healthcare fund. Similarly, TCR2 Therapeutics, an immuno-oncology company based in Cambridge, Massachusetts, was granted $125 million in Series B funding that was co-led by Pacific-focused investor 6 Dimensions. In all of these situations, Chinese funding poured into a nascent-stage U.S. biotech is the common denominator.1 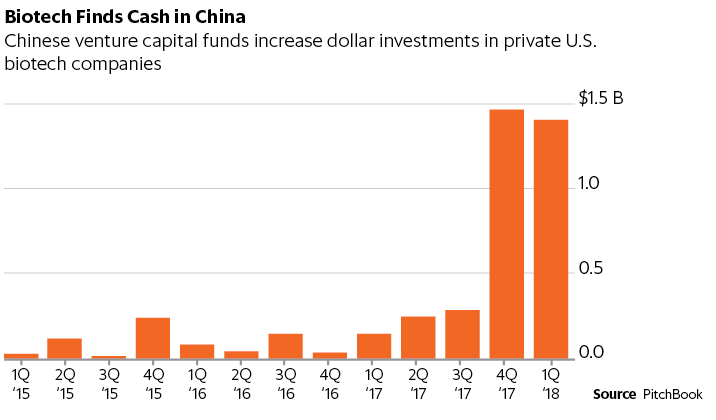 Take it to the Limit

“It makes a lot of sense (for Chinese funds) to look at U.S. biotech firms especially as many Chinese biotechs still lag behind their U.S. peers in terms of the quality
and the pipeline of products,” Jonathan Wang noted. 3

Given the amount of Chinese capital, the growing interest in the segment and the sheer amount of biotech start-ups, the market feels unlimited. “China has an insatiable appetite for access to the biotech area,” Joel Marcus, chief executive officer of Alexandria Real Estate Equities, a life-sciences real estate investment trust that has a biotechnology venture-capital arm, also told Bloomberg. “I don’t think there’s going to be any shortage of Chinese capital.”3