MINNEAPOLIS, March 12, 2018 /PRNewswire/ — At the 2018 US HUPO Conference, Bruker (NASDAQ: BRKR) and Evosep announce that they have executed a co-development and co-marketing agreement for the Evosep Onechromatography system to work seamlessly with Bruker's timsTOF Pro ultra-high resolution quadrupole time of flight mass spectrometer.  The timsTOF Pro is powered by TIMS (Trapped Ion Mobility Separation) and the PASEF (Parallel Accumulation Serial Fragmentation) method to provide an additional dimension of fast ion mobility separation with near 100% duty cycle for faster and more sensitive complex mixture analysis.  This unique combination of speed, robustness and ultra-high sensitivity is intended to deliver critical performance required for large cohort clinical proteomics studies, ushering in the era of nanoflow LC-MS/MS in clinical research. 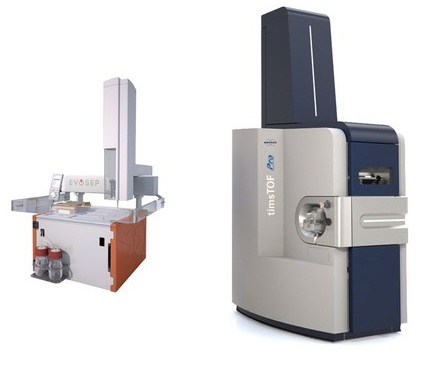 Evosep One and timsTOF Pro, a revolutionary combination of robustness,
speed and throughput in proteomics

Bruker's revolutionary timsTOF Pro for high sensitivity proteomics can now be integrated with the Evosep One  (www.Evosep.com) separation device for high-throughput clinical proteomics.  The Evosep One is a novel chromatography system for large cohort proteomics, optimized for >200 samples/day and > 90% MS utilization.  Its LC peak widths of ~2 seconds for ~5 minute gradients have been combined with the PASEF method on the timsTOF Prowith MS/MS rates >150 Hz.  The novel combination already delivers superb sensitivity (50ng HeLa) and high throughput for LFQ of ~1,200 proteins in ~5 minutes.  For large sample cohorts, this enables biomarker research and validation on >200 samples per day - a breakthrough for clinical proteomics research. Under the co-development part of the agreement, Bruker and Evosep will work together to further integrate the two systems by enabling control of both the Evosep One and the timsTOF Pro using Bruker's Hystar LC-MS control software, and working to enhance the already impressive performance of the combination.

Nicolai Bache, Head of Applications at Evosep, commented: "We are excited about the collaboration and integration as the outstanding scan speed and sensitivity of the timsTOF Pro powered by PASEF is the perfect match for the short robust gradients with virtually no overhead that the Evosep One delivers."

Gary Kruppa, Vice President for Proteomics at Bruker Daltonics, elaborated: "The Evosep One is a perfect front-end solution for the timsTOF Pro when high-throughput is required, as it leverages the advantages of PASEF, putting world class biomarker discovery and validation capabilities in the hands of clinical researchers."

For more than 55 years, Bruker has enabled scientists to make breakthrough discoveries and develop new applications that improve the quality of human life. Bruker's high-performance scientific instruments and high-value analytical and diagnostic solutions enable scientists to explore life and materials at molecular, cellular and microscopic levels. In close cooperation with our customers, Bruker is enabling innovation, improved productivity and customer success in life science molecular research, in applied and pharma applications, in microscopy and nanoanalysis, and in industrial applications, as well as in cell biology, preclinical imaging, phenomics and proteomics research, microbiology and molecular pathology research.