The Drive to Increase Productivity

There exists intense pressure to increase the efficiency and productivity of biopharmaceutical manufacturing and to thereby reduce drug development and manufacturing timelines and costs. Facilities of the future are envisioned to leverage more smaller-footprint, intensified (and even continuous) processes combined with single-use technologies, advanced real-time process analytics, and state-of-the-art software and automation solutions.

Before cell culture can occur in the main bioreactor, a sufficient amount of cells (or biomass) must be generated to seed the production bioreactor and ensure generation of the desired biologic drug at an acceptable titer. Getting to that point requires a lengthy and involved process that begins with thawing a single vial of frozen cells from the seed bank, followed by centrifugation and multiple rounds of cell expansion to achieve the required cell mass to seed a production bioreactor. (Figure 1).

There are several approaches for increasing the productivity of the seed train. One obvious strategy is to reduce the number of cell expansion steps required to achieve the desired quantity and density of cells. Another is to achieve higher cell densities in the same or less time as a traditional seed train, as higher seeding of the production bioreactor can potentially lead to increased titers, especially when using a robust media platform.

In a traditional seed train, expansion is usually performed in batch mode, scaling from lab to production bioreactors up to N-1. With the use of batch mode, the maximum seeding cell concentration is lower than what can be achieved in a perfused seed train, due to the need to maintain a reproducible healthy cell growth to inoculate the next stage. However, when applying perfusion to the N-1 stage, a medium is required that can support these higher cell densities and control the metabolic profile of the cells, both to inhibit toxic byproducts and to ensure adequate nutrient levels for high cell densities.

In fed-batch cell culture processes, culture duration is about 2–3 weeks with regular feed additions following a defined feeding regime (timepoints and amount). Fed-batch processes are run in large scale (up to 15,000–20,000 L) stainless-steel bioreactors with a significant footprint.

Perfusion involves the constant feeding of fresh media and the removal of spent media and product while retaining high numbers of viable cells within the bioreactor vessel. Culture duration is about a month or longer. Perfusion allows for high-density cell cultures in both the seed train and production bioreactors and can result in a 3-fold increase of volumetric productivity. In production processes, capacity can be increased with a reduced footprint. For example, the same amount of protein can be produced in a 2,000-L perfused bioreactor compared with a 15,000-L fed-batch bioreactor.

Higher productivities (grams of product per liter bioreactor working volume produced per day) and continuous operation allow the use of much smaller, single-use bioreactors (up to 2000 liters) for reduced capital costs. Scale-up is simplified as well; the process can be run for a longer time in the same equipment, or additional bioreactors with the same setup and process conditions can be run in parallel. For these reasons, perfusion processes are well-suited for multiproduct facilities and are receiving increasing support from regulators.

Today, if existing fed-batch cell culture infrastructure exists, it will generally be utilized. For new installations, however, whether an entire facility or a single additional manufacturing suite, perfusion in single-use equipment is generally preferred.

The traditional process of thawing a single vial of cells to initiate cell expansion for a GMP manufacturing batch is time-consuming and requires open cell culture operations, thus increasing the risk of contamination. Use of cells banked at high cell density and high volume, which feeds into the first seed train bioreactor, can streamline the overall process. Traditional seed train expansion can take up to 20–30 days before inoculation of the production bioreactor. As an example, a 150-mL bag of 50 x 106 cells/mL can reduce the standard process 10 ten days as compared to starting with a 1-mL vial of 10 x 106 cells/mL. This time is achieved by starting the expansion in N-3.

HCDC provides a means for avoiding the complex initial steps of a traditional seed train and the open cell culture operations that are involved.

In addition to time savings, HCDC offers additional advantages, including:

The use of disposable bags allows for aseptic connections and completely closed processing for reduced contamination risks. In addition, HCDC enables one seed train expansion step at a central site in support of several production campaigns. 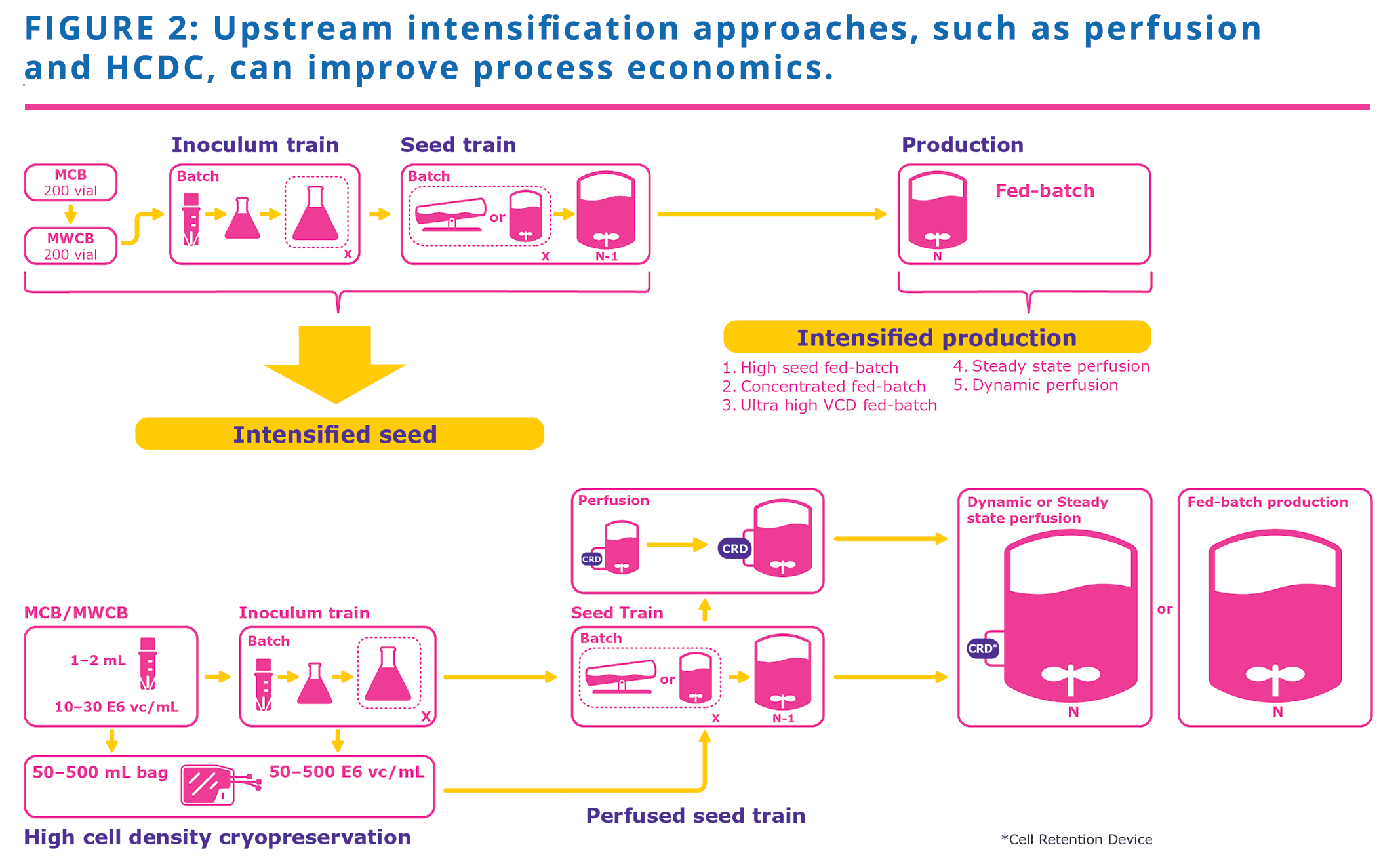 Perfused seed trains also reduce the number of steps required to reach the desired cell density and quantity (Figure 2). Rather than needing to scale up in multiple bioreactors, a perfusion reaction can be performed for a longer duration in a smaller bioreactor to generate the same amount of material. Overall, perfusion-based processes can reduce the costs of manufacturing and increase product throughput while maintaining the production bioreactor in a more simple-to-operate fed-batch mode. Perfused seed trains also allow for higher seeding of the production bioreactor.

Key components of cell culture media include glucose, which is the energy source, amino acids, salts, trace elements to support specific cellular functions, buffers, and surfactants. The specific composition depends on the application, such as expansion or production, and the cell culture mode (fed-batch vs. perfusion). In addition to the composition, other factors must also be considered, including the media concentration and the ease of hydration in the powdered form.

Typically, cells are banked in one medium that is also used for expansion, and a different medium is used during production cell culture. A production medium is rather designed to support cells not for robust growth but for high expression of the target biomolecule.

During production, nutrients and oxygen are consumed, and metabolites and carbon dioxide are produced. The medium must be designed to provide an environment that optimally manages the metabolite levels while ensuring access to sufficient nutrients. The medium should also be designed to address the different needs of fed-batch processes, in which the feed is added over time and all of it stays in the bioreactor, and perfusion, in which the medium is replaced with fresh material daily. A perfusion medium, for instance, must facilitate high productivity at low perfusion rates.

In fed-batch mode, on the other hand, there is limited space in the bioreactor for the addition of media as the cell culture process proceeds. The volume of feed required over the length of cell culture is calculated before initiation of the process, which also determines the starting volume of the basal media for the fed-batch culture. By using a highly concentrated feed, it is possible to have a higher starting volume, which increases the final output of the target protein, because there are more cells available from the outset to produce the product.

Hydration of media is also important. Media are produced as powders or in a compacted (granular) format for easier storage, handling, and shipment, particularly for large-scale applications. The media preparation process benefits from quick dissolution and reconstitution protocols, because it reduces the preparation time for more optimized processes.

At MilliporeSigma, we are focused on developing media products that suit different CHO cell lines (e.g., CHO-K1, CHO-S, CHO-DG44). With regard to the application within the cell culture process, we design media for specific process needs to improve feeding strategies in fed-batch processing or to support high cell densities in perfusion or seed train processes, with the goal of maximizing capacity and process efficiency.

In evaluating perfusion processing, we realized that, during seed train, the optimal nutrient balance in the medium is different to the optimal balance in the production mode, as this step is focused on keeping the cells in exponential growth mode. We combined the newly balanced formulation with our production media for fed-batch and perfusion and could demonstrate an increased productivity when this new formulation was used in the expansion phase. Cellvento® 4CHO-X Expansion Medium was designed to be used throughout the seed train and is compatible with our EX-CELL® Advanced and Cellvento® fed-batch and perfusion media. This convenient feature eliminates the need to perform cell adaptation or even check for compatibility. Cellvento® 4CHO-X Expansion Medium enables elimination of a time- and resource-intensive adaptation step when moving to the production steps; the workflow can progress from vial thaw to production without the need for media adaptation if the cell bank is established in Cellvento® 4CHO-X Expansion Medium.

Cellvento® 4CHO-X Expansion Medium was developed as a rich growth medium for the N-1 expansion phase in perfusion mode. This new medium is chemically defined and is formulated with an optimal nutrient concentration to achieve low cell-specific perfusion rates (CSPRs) at high cell densities. The medium has been specifically formulated to control the metabolic profile of the cells, both to minimize inhibiting byproducts and to ensure adequate nutrient levels for high cell densities. More specifically, it supports high growth and viability, thus increasing cell biomass compared with traditional media used for cell banking/expansion and production processes.

Cellvento® 4CHO-X Expansion Medium can also be used for HCDC (when a cryoprotectant is added) and supports the freezing and thawing of cells without cell damage.

Importance of a Comprehensive Media Platform

Access to specially designed media for different phases of the cell culture process from initial inoculation of the frozen cells to production can provide significant advantages. However, switching from one cell culture medium to another can add complexity if the media are not part of a consistent platform designed to enable easy switching from one to the other without the need for significant adaption of the cells.

In addition to Cellvento® 4CHO-X Expansion Medium for seed-train intensification at the N-1 stage in perfusion mode and HCDC, the Cellvento® CHO media portfolio includes cell line–specific cell culture media and feeds for fed-batch production culture. EX-CELL® Advanced HD Perfusion Medium supports growth and productivity across a diverse set of CHO cell lines in perfusion cultures while still allowing for flexibility in the adjustment of protein quality attributes. In addition to steady-state perfusion processes, it can also be used in other perfusion applications, such as continuous fed-batch and dynamic perfusion, where cells are not bled.

Although MilliporeSigma already offers a comprehensive portfolio of cell culture media and feeds, we continue to identify opportunities for the addition of products that can address existing unmet needs in different targeted applications. We continue to develop solutions for both fed-batch and perfusion cell culture programs with the goal of increasing efficiency and productivity while also enabling our customers to improve the quality and consistency of their products.

Biopharmaceutical manufacturing is a complex undertaking that involves multiple and connected unit operations. In order to best support our customers, MilliporeSigma takes a holistic view of the entire biologic drug manufacturing process, starting at the cell line through to fill/finish. We can help customers with cell line development and then provide media designed to match. We also supply state-of-the-art bioreactors, perfusion cell-retention devices, filters, and downstream processing technologies. All of these pieces can be put together in a single solution, reducing supply chain management requirements and ensuring a fully integrated and optimized manufacturing system. 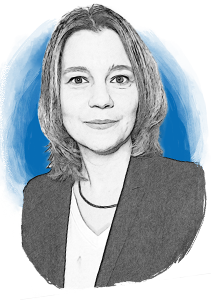 Melanie has more than 20 years of pharma industry experience with over 10 years in upstream processing Global Product Management. In her current role, Melanie develops and manages a media portfolio with focus on new product launches of CHO catalog media, helping to overcome process challenges in bioprocessing by improving product handling, leading to higher process yields, reducing footprint, and services to support regulatory requirements. She holds a Ph.D. and M.Sc. from the University of Goettingen, Germany.