“Amazing” Nanoparticles from Maize: A Potent and Economical Anti-Cancer Therapeutic

Tokyo, JAPAN – Nanomaterials have revolutionized the world of cancer therapy, and plant-derived nanoparticles have the added advantage of being cost-effective and easy to mass produce. Researchers from Tokyo University of Science have recently developed novel corn-derived bionanoparticles for targeting cancer cells directly, via an immune mechanism. The results are encouraging, and the technique has demonstrated efficacy in treating tumor-bearing laboratory mice. Moreover, no serious adverse effects have been reported in mice so far.

Nanoparticles, or particles whose size varies between 1 and 100 nanometers, have shown tremendous potential in many areas of science and technology, including therapeutics. However, conventional, synthetic nanoparticles are complicated and expensive to produce. Extracellular vesicles (EVs), which have emerged as an alternative option to synthetic nanoparticles, show challenges for mass production.

Another recently emerging option is that of plant-derived nanoparticles (NPs), which can be easily produced in high levels at relatively lower costs. Like EVs, these nanoparticle-based systems also contain bioactive molecules, including polyphenols (which are known antioxidants) and microRNA, and they can deliver drugs to target organs in our bodies.

Leveraging this knowledge, researchers from the Tokyo University of Science (TUS) recently developed bionanoparticles with anticancer activity, using corn (maize) as the raw material.
Prof. Makiya Nishikawa of Tokyo University of Science, Japan, who led the research team in this endeavor, elucidates, “By controlling the physicochemical properties of nanoparticles, we can control their pharmacokinetics in the body; so, we wanted to explore the nanoparticulation of edible plants. Maize, or corn, is produced in large quantities worldwide in its native form as well as in its genetically modified forms. That is why we selected it for our study.” The results of this study were published online on 24 November 2021 in Scientific Reports.

The team created a homogeneous mixture of super sweet corn in water, then centrifuged this corn juice at a high speed, subsequently filtering it through a syringe filter with a pore size of 0.45 μm. The filtered samples were then ultracentrifuged to obtain NPs derived from corn. The corn-derived NPs (cNPs) were approximately 80 nm in diameter. Quite interestingly, these cNPs also carried a tiny net negative charge of −17 mV.

The research team then set up experiments to see whether these cNPs were being taken up by various types of cells. In a series of promising results, the cNPs were taken up by multiple types of cells, including the clinically relevant colon26 tumor cells (cancer cells derived from mice), RAW264.7 macrophage-like cells, and normal NIH3T3 cells. RAW264.7 cells are commonly used as in vitro screens for immunomodulators — drugs that primarily target various cancer pathways.

The results were astounding: of the three types of cells, cNPs only significantly inhibited the growth of colon26 cells, indicating their selectivity for carcinogenic cell lines. Moreover, cNPs were able to successfully induce the release of tumor necrosis factor-α (TNF-α) from RAW264.7 cells. It is a well-documented fact that TNFα is primarily secreted by macrophages, natural killer cells, and lymphocytes — three key ingredients of our highly evolved immune system and which help mount an anticancer response. “The strong TNFα response was encouraging and indicated the role of cNPs in treating various types of cancer,” explains Dr. Daisuke Sasaki, first author of the study and an instructor and researcher at TUS.

The research team then conducted a reporter assay with the enzyme “luciferase” (derived from fireflies), which is a sensitive reporter for studying various biological responses. This luciferase-based assay revealed that the potent combination of cNPs and RAW264.7 cells significantly suppressed the proliferation of colon26 cells. Finally, the research team studied the effect of cNPs on laboratory mice bearing subcutaneous tumors. Once again, the results were astonishing: injecting cNPs into colon26 tumors on a daily basis significantly suppressed tumor growth, without causing serious side effects, or weight loss.

“By optimizing nanoparticle properties and by combining them with anticancer drugs, we hope to devise safe and efficacious drugs for various cancers,” observes an optimistic Prof. Nishikawa.

Summarizing these impactful findings, Dr. Kosuke Kusamori, co-author and assistant professor at TUS says, “These cNPs exhibit excellent anti-tumor properties, are easy to develop, and are economically viable. Moreover, they do not exhibit any serious adverse effects, at least in mice so far!”

Indeed, this could be the anti-cancer therapy of tomorrow; TUS has made a truly a-maize-ing discovery! 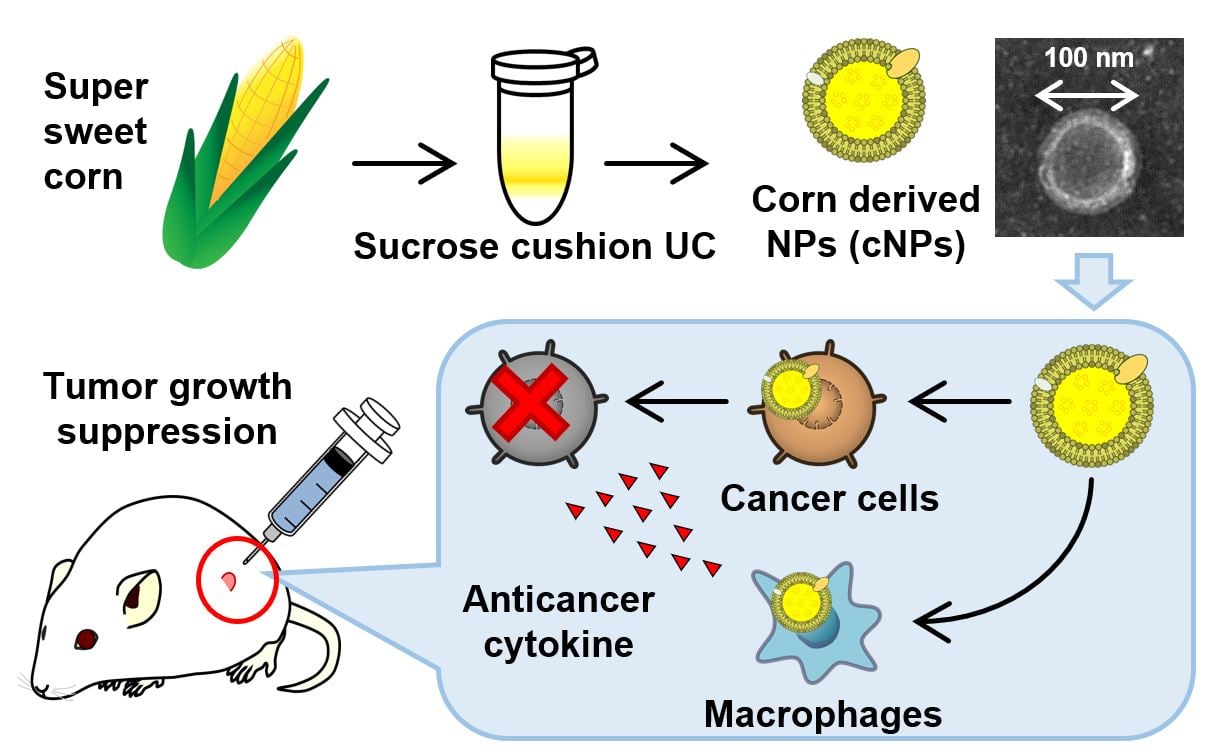 Researchers at TUS have developed an edible plant-based nanoparticle that could be the next potent anticancer therapeutic. Image credit: Makiya Nishikawa from Tokyo University of Science.

About Professor Makiya Nishikawa from Tokyo University of Science

Dr. Makiya Nishikawa is a Professor at the Faculty of Pharmaceutical Sciences, Tokyo University of Science, Japan. His research interests include biopharmaceutics, pharmacokinetics, and drug delivery systems, among many others. Dr. Nishikawa is the recipient of the 17th Japan DDS Society Nagai Award, the Japanese Society of Pharmaceutical Sciences Young Investigator Award, and the Pharmaceutical Society of Japan Young Investigator Award. He has over 275 peer-reviewed journal publications and 2 patents to his credit. Dr. Nishikawa has also authored more than 30 books on a variety of topics.

Tokyo University of Science (TUS) is a well-known and respected university, and the largest science-specialized private research university in Japan, with four campuses in central Tokyo and its suburbs and in Hokkaido. Established in 1881, the university has continually contributed to Japan's development in science through inculcating the love for science in researchers, technicians, and educators.

With a mission of “Creating science and technology for the harmonious development of nature, human beings, and society," TUS has undertaken a wide range of research from basic to applied science. TUS has embraced a multidisciplinary approach to research and undertaken intensive study in some of today's most vital fields. TUS is a meritocracy where the best in science is recognized and nurtured. It is the only private university in Japan that has produced a Nobel Prize winner and the only private university in Asia to produce Nobel Prize winners within the natural sciences field.