Lipid nanoparticles (LNPs) are crucial to the successful delivery of mRNA vaccines and other RNA and nucleic acid therapeutics. Developers of these novel products need the support of a collaborative partner such as Evonik with extensive experience working with all type of drug substances, lipids, lipid formulations, and lipid production methods. An effective partner must also possess the necessary unique analytical capabilities for LNP characterization and the ability to support clients from concept to commercialization.

The Importance of LNPs for mRNA Therapies

Messenger RNA (mRNA) technology is generating a lot of excitement in light of the emergency use authorizations for the Pfizer/BioNTech and Moderna COVID-19 vaccines, but mRNA therapeutics is not a new field. Nor is the encapsulation of oligonucleotides and nucleic acid, which has been explored since the late 1990s. For the COVID-19 vaccines, the ability to synthetically produce mRNA at large scale has enabled a better and faster pathway to GMP manufacturing.

Encapsulation of mRNA is also an essential component of these vaccines. Without the protection of the lipid bilayer afforded by lipid nanoparticles (LNPs), a significant percentage of these large mRNA molecules would be degraded, and those that survived would have difficulty entering human cells. Through encapsulation in LNP drug delivery systems, it is also possible to target mRNA to specific cells, such as liver or tumor cells.

LNPs are attractive delivery vehicles because their lipids are natural components of cell membranes, unlike other vehicles, such as viral vectors, which can elicit their own immune responses.  LNPs containing ionizable cationic lipids allow neutral, non-charged particles to be administered to patients, and, because of the high biocompatibility of these LNPs, it is possible to deliver repeated doses without eliciting an unwanted immune response. 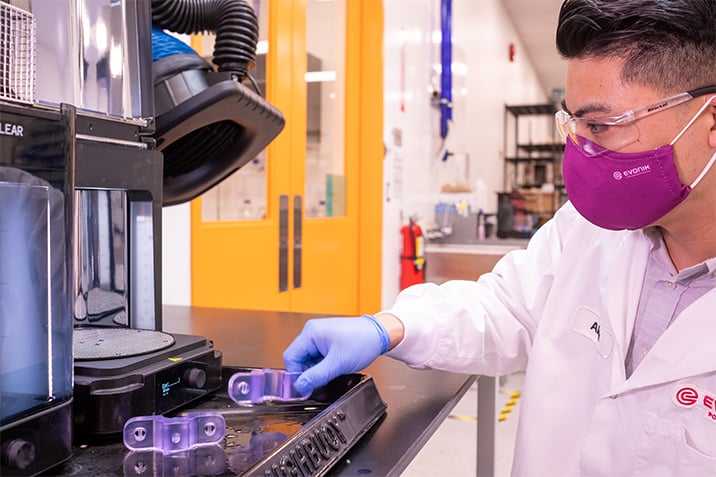 Onpattro, an RNAi drug from Alnylam Pharmaceuticals for the treatment of transthyretin amyloidosis, a fatal genetic disease, received the first FDA approval for an RNA-based therapeutic encapsulated into an LNP in August 2018.

LNPs are a platform technology that allow for a switch in a payload to address the current medical need. This approach was recently utilized for rapid development of COVID-19 mRNA vaccines, where lipid-based delivery vehicles used for vaccines were likely tested for safety in earlier clinical studies, but for different clinical indications. That is critical, because the LNP composition also impacts efficacy.

All of the LNP delivery vehicles, particularly for delivery of mRNA, are typically structured with four basic components: an ionizable cationic lipid critical for the formation of the LNP particle, a helper lipid that constitutes the rest of the bilayer, a stabilizing lipid like cholesterol, and a PEGylated lipid that shields the particle from opsonization.

Conventional liposomal formulations require a size-reduction step. Initially formed liposome particles are typically quite large and multilayered. As a result, they must be reduced in size using specially designed high-pressure extruders to the target size of approximately 100 nm. In addition, the payload for these  liposomes can be encapsulated in the aqueous space of the liposome, or in the bilayer, or it can decorate the exterior surface. Nucleic acid LNPs are typically formed used micromixing or rapid mixing streams without a size-reduction step, and the payload is in the core of the particle.

The subsequent downstream steps are very similar for both types of liposome products. The solvent used during the liposome formation step must be removed, typically using tangential flow filtration. In addition, all of these formulations are delivered parenterally and must be sterile.

Evonik has several decades of experience formulating a variety of different cationic lipids and a variety of different liposome carriers, including LNPs. The Vancouver site was established in 1991 as Northern Lipids, a company spun out of the University of British Columbia specializing in synthetic lipids. By the late 1990s, our expertise expanded to the formulation of conventional liposome products, and in the early 2000s to nucleic acid LNPs. Evonik acquired the site in 2016. Today, we also specialize in developing and optimizing manufacturing process for conventional liposome and LNP formulations.

For nucleic acid delivery solutions, our knowledge and experience with conventional liposome formulation is quite valuable. We understand the challenges associated with process development and scale-up of those formulations to support clinical manufacturing and have successfully scaled formulation initially generated on nanosystems to the liter scale and beyond.

In addition, we have an integrated source of plant-derived cholesterol, which is preferred in therapeutic products over the traditional animal-derived cholesterol obtained from sheep’s wool. As with any other biopharmaceutical product, the regulatory approval pathway is easier if the raw materials are not derived from animals, as such material can present significant contamination risks.

Furthermore, between our two sites in Vancouver, Canada, and Birmingham, Alabama, we can support projects from early to late stages and commercialization. At the Vancouver site, we specialize in R&D, the development of feasibility studies, and phase I and phase II clinical manufacturing. Projects that move beyond these early phases are transferred to the FDA-inspected Birmingham facility, which specializes in phase III and commercial production up to mid-scale.

There are more than 50 candidates in clinical trials leveraging LNP delivery from the very early stage to gearing toward phase III, with the later-stage projects dominated by COVID-19 vaccines with accelerated approval timelines.

Before the COVID-19 pandemic, approximately 50% of Evonik’s portfolio involved conventional liposomal formulations for cytotoxic and other highly potent APIs. However, we have seen a shift toward nucleic acid LNPs since 2018 following the approval of Onpattro. Now that the COVID-19 vaccines have been authorized, we expect the 50:50 split between conventional and nucleic acid products to continue to change, given the higher demand for LNPs.

In fact, we expect strong growth for the lipid drug delivery business, with growth potential in cell and gene therapies beyond mRNA COVID-19 vaccines, such as mRNA therapies that can treat hereditary diseases or cancer immunotherapies. We have already seen the share of mRNA-related projects within all of Evonik’s LNP projects increase from 20% in 2017 to 70% in 2021.

To meet growing demand, we are planning expansion of our nucleic acid competence center in Vancouver. Evonik is also evaluating the expansion of our parenteral fill/finish capacity in Birmingham.

One of the possible hindrances will be ongoing regulatory uncertainty. The U.S. FDA published a guidance on liposome manufacturing about 20 years ago. While that guidance applies to nucleic acid LNPs, additional clarification is needed, given the tremendous advances in technology over the last two decades, let alone 2020.

For instance, one of the key recommendations for characterizing conventional liposomal products is characterizing the in vitro payload release assay. Such assays are a challenge to develop for LNPs, particularly with regard to correlation of the results with actual biological activity. Mimicking release would require a decrease in the pH to degrade the LNP. Those conditions, however, could degrade the payload as well. There is clearly a need for regulatory authorities to establish the requirements for an appropriate characterization assay for nucleic acid LNPs.

There are a few other areas where LNPs could play an important role in advancing novel therapies.  Therapies using gene editing with CRISPR–Cas9 tools and technologies moving into the clinic could generate more significant growth in demand for lipid delivery vehicles, with the caveat that there are some ethical pitfalls in this area that drug developers and their partners will need to address and overcome.

In some chronic diseases, such as many liver diseases, a protein is missing or nonfunctional, leading to over- or underexpression of mRNA. mRNA therapies could potentially address these problems, but would probably require repeated administration. LNPs, with their good safety profile, will likely be the preferred formulation approach for these treatments.

In both of these emerging applications for lipid delivery vehicles, Evonik is an ideal development partner. We have experience with many different payloads, including cytotoxic compounds, as well as numerous types of formulations, formulation compositions, and methods of producing LNPs. This expertise, combined with our knowledge of the safety and regulatory landscape and integration with excipients, such as plant-derived cholesterol, enables us to work with more challenging and novel materials, including novel siRNA and self-replicating mRNA molecules that might have a different safety rating than the current mRNA COVID-19 vaccines.

Evonik has worked with many different clients. The most successful projects have involved partners willing to form collaborative relationships, whether they are startups with no lab space or big players with established manufacturing processes.

To support our clients, we bring an understanding of the basic principles of liposomes and LNPs, from the key building blocks to the production process and characterization, which is equally important. Analytics for LNPs play a crucial role in formulation development, such as the evaluation of the stability of each individual component in an in vitro release assay and characterization of the payload inside the LNP.

Our solid background in conventional liposomal formulations also helps us avoid pitfalls during the early development stages for LNPs. The same can be said for our experience working with highly potent APIs and a broad array of excipients. In addition, we offer custom lipids and are currently expanding this portfolio.

That well-rounded expertise in formulation, characterization, and early- to late-stage development capabilities, including many seamless process transfers, combined with a strong regulatory background, enables Evonik to provide phase-appropriate formulation and process development and production support as a formulation transitions from the bench scale to commercial manufacturing. We provide an integrated solution that unites all of these capabilities in one package.

Our track record for specialized system solutions based on products, technologies, and services enables us to support any type of molecule, from highly potent APIs to mRNA vaccines in lipid nanoparticles to personalized medicines such as gene therapies. That ability positions us well to facilitate midscale, flexible, personalized medicine approaches.

Natalia Zisman is a Senior Manager in Technical Marketing at Evonik’s Vancouver Laboratories, specializing in liposome and lipid nanoparticle drug delivery systems. Natalia has 20 years of experience in the liposome/lipid nanoparticle drug delivery field and has worked in a number of drug delivery companies prior to joining Evonik in 2014. She has been involved in all aspects of liposome manufacturing, starting from early-stage formulation design, process development, scale-up, and clinical manufacturing. Natalia holds a degree in chemistry from the University of British Columbia.

Q: What do you see as the key innovations or technologies that will make personalized/precision medicine a reality?