Advances in linker technologies have played a role in improving safety and efficacy for antibody–drug conjugates (ADC), resulting in a growing number of regulatory approvals and heightened interest for these promising drug therapies. ADCs are highly complex, however, as they consist of biologic and chemical API components with cytotoxic payloads also requiring multi-step syntheses. MilliporeSigma is helping to accelerate ADC development by reducing development timelines and risk by offering advanced payload intermediates for the most common classes of payloads.

From a Slow Start to a Rapidly Expanding Market

The concept of antibody–drug conjugates (ADCs) has a long history in drug development. There has been interest for decades in these targeted therapies, which comprise a monoclonal antibody (mAb) for binding to specific cells linked to a “payload,” typically a cytotoxic small molecule agent that kills the cells. They offer the attractive advantage of dramatically reducing the side effects observed with systemic treatment using the same or similar chemotherapeutic drugs.

The challenge has been to develop effective antibody–linker–payload chemistries that provide consistent products and in vivoperformance. A consistent drug-to-antibody ratio must be achieved, with the payload linked in consistent locations on the antibody. The antibody must be specific for the target cells, and the linker must remain intact long enough for the ADC to reach those target cells, but then release the payload specifically to the targeted cells.

The first human clinical trial with an ADC was conducted in 1983.1 Advances were made in the 1990s with the use of humanized mAbs for reduced off-target effects. The first ADC, Pfizer’s Mylotarg, received approval in 2000.

A second ADC leveraging more advanced linker technology was approved in 2011, followed by a third in 2013. In recent years, a rapid acceleration has been seen in approvals, with three ADC drugs approved by the U.S. FDA, four by the EMA, and three by the PDMA over the last 18 months.

These recent successes reflect work undertaken over many years by a growing number of researchers. Knowledge and understanding of what is required, with respect to the design of the mAbs, linkers, and payloads used in ADCs, has led to dramatic improvements in safety and efficacy. Now that several products leveraging third- and fourth-generation linker technologies have proven successful, we can only expect the field to expand more rapidly still, including the use of established and new payload chemistries.

Focus on Cancer and Other Opportunities

The ADCs approved thus far have targeted specific cancers. However, research is underway to investigate the use of ADCs for the treatment of many other indications, such as autoimmune diseases, difficult-to-treat bacterial infections, and atherosclerosis.2

Here again, as knowledge and understanding of ADCs expands, the ability to apply this technology to indications beyond cancer is also growing. Where there used to be just a handful of reports, there are now a plethora, and we foresee that number continuing to increase as successful demonstrations and additional drug approvals are achieved.

Compared with the expanding breadth of options in the selection of antibodies and linker chemistries, there has been significant convergence around the payloads chosen for ADC development. To date, three types of payloads account for approximately 80% of the cytotoxics used in both approved and disclosed pipeline ADCs: dolastatins, maytansinoids, and pyrrolobenzodiasepine (PBD) dimers.

Derivatives of dolastatin 10, which was initially isolated from a sea hare, dominate with a 40% share. Dolastatins are tubulin inhibitors and comprise the payloads of four commercial ADCs. Maytansine was originally discovered in an African shrub and is also a tubulin inhibitor. Maytansinoids account for approximately 25% of payloads used in ADCs in the clinic and can be found in one commercially marketed ADC.

PBD dimers are the newest of the three payload classes. As DNA-damaging agents, they operate by a very different mechanism than the first two payload classes. The original compound was isolated from Streptomyces bacteria. The first biologics license application for an ADC leveraging a PBD dimer payload was filed in 2020, which has since been granted FDA approval. Overall, PBD dimers are used in approximately 15% of the ADCs in the clinic.

The interest in these three classes of compounds is likely driven by their demonstrated results. There are, however, many other small molecule cytotoxic agents that operate by different mechanisms and have been shown to, or could potentially, provide better performance.

The payloads commonly used for ADCs are highly complex molecules that take many steps to synthesize. Typically, they are manufactured by a contract development and manufacturing organization (CDMO) with specialized infrastructure and expertise via a service arrangement that involves years of work. Alternatively, drug manufacturers license them from the initial developers of patented payloads.

Within MilliporeSigma's SAFC® portfolio , we have created a new option with the introduction of advanced dolastatin and maytansine intermediates that are available off-the-shelf with no licensing or other contractual requirements. They do, however, come with full regulatory support.

By elaborating these advanced intermediates, customized dolastatin and maytansine payloads can be developed in dramatically shortened timelines, making it possible for drug developers to get into the clinic in months rather than years. Using our dolastatin intermediate, a target dolastatin payload can be produced in three or four synthetic steps compared with 20 steps with traditional approaches. The overall result: our new manufacturing platforms enable rapid production of payloads with reduced time, risk, and complexity.

These particular advanced intermediates were chosen because the dolastatins and maytansines are currently the most commonly used payloads for conjugates, and our goal is to accelerate our customers’ life science projects. We want to help our customers get their products to market faster, and focusing on the payloads of most interest enables us to have a bigger impact. With these intermediates, we greatly decrease the challenges associated with ADC development and make these highly promising drug candidates more accessible to drug developers and, ultimately, patients.

Customers can simply select the payload intermediates from the SAFC® portfolio and perform the remaining development work in-house or further leverage our knowledge and expertise in ADC technology by accessing our CDMO services. We have extensive experience working with ADC payloads and linker chemistries — for more than half of the approved ADCs, at least some component was developed or manufactured in one of our SAFC® manufacturing facilities — and can help customers rapidly identify the optimum payload derivative for their given ADC candidate.

We have a high level of understanding of what is needed to be successful with regard to all aspects of ADC development programs, from regulatory to analytical to manufacturing, including the challenging bioconjugation step involving the biologic mAb and highly potent payload. We also have state-of-the-art facilities with SafeBridge certification as an Industry Leader for the production of highly potent compounds, a certification that only three companies have achieved. We also have the experience and capability to support programs from preclinical to commercial launch.

One of the biggest challenges still facing the ADC field today is the fact that the commonly used cytotoxic payloads are very hydrophobic compounds. Antibodies are inherently designed to exist in bodily fluids; linking these hydrophobic payloads to mAbs can, however, cause problems in the body.

Drug developers are intently focused on identifying mechanisms for better solubilizing the payloads to reduce those issues. One possible answer is to use alternative payloads that are more hydrophilic but still exhibit the toxicity profiles required to effectively kill target cells. Another is to develop new linker chemistries — cleavable or noncleavable — that can impact the payload solubility. MilliporeSigma is working to develop a broadly applicable solution to address developers’ challenges in this area.

The other big challenge that still complicates ADC development and manufacturing is the fact that they combine biologic and chemical APIs into one drug substance. Many different types of expertise are required to develop these complex products.

With the golden age of ADC commercialization only just beginning, we anticipate many more innovations to increase the efficacy and reach of these therapies going forward.  Providing off-the-shelf payloads is just one way that MilliporeSigma provides solutions to ADC developers across the value chain and the development to commercialization cycle to enable the innovation that will drive this field for years to come. 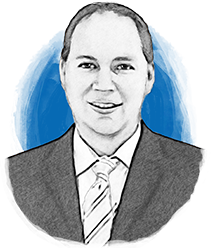 Dr. Goeddel is leading a team responsible for introducing new API products and implementing new technologies inside of Actives and Formulations R&D. Prior to that, David was a manager and process chemist specializing in API process development. David earned a Ph.D. in chemistry from Colorado State University, where he studied under advisors Yian Shi and Albert Meyers.