“There was some real fun there with regard to the local dialect
of the community.” Nigel Walker, Driver (Lamborghini)

The Road to BIO was officially in the Deep South, which meant, among other things, that it was only going to get hotter from here. Back in New Jersey on the Road to BIO’s day of reckoning, the crew had in its distracted haste brushed off a concern that was becoming increasingly difficult to deny: the air conditioning in the RV’s main cabin was broken. With seven days of driving through the heat of the south ahead of them, and with the last three of those days taking place under the desert sun, this was now a matter of safety over comfort.

As in any matter in which the welfare of his peers was at stake, Albert took command of the situation. With just a two-hour window before the RV was due on location for the next sponsor interview, he contacted the RV rental company and headed off to get the air conditioning unit replaced.

While Albert did his part to accommodate his team in a city widely regarded as America’s most hospitable, the crew was greeted with a hearty dose of southern hospitality at Alcami. The parking lot security guard, whom Brian and Nigel had met a few months prior during a photoshoot for the new Charleston site, was incredibly friendly and welcoming to the crew. 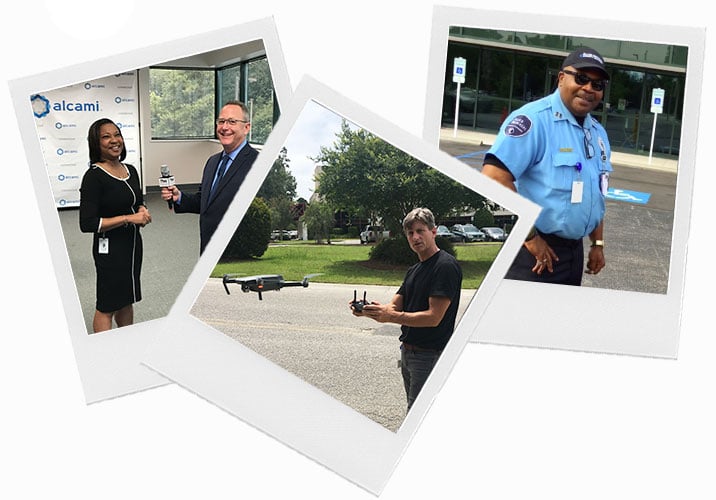 “He was a superb man,” recalled Steve, who had the opportunity to interact with the gentleman as the crew was setting up. “He was one of those guys everyone in the building knows and sees whenever they come and go.”

Alcami, a That’s Nice client since before AAI Pharma Services and Cambridge Major Laboratories merged to form the world-class CDMO that exists today, is rapidly expanding its parenteral manufacturing capabilities with the addition of its Charleston, South Carolina site in 2016. Today, the facility is undergoing a number of major upgrades to accommodate its continued growth. 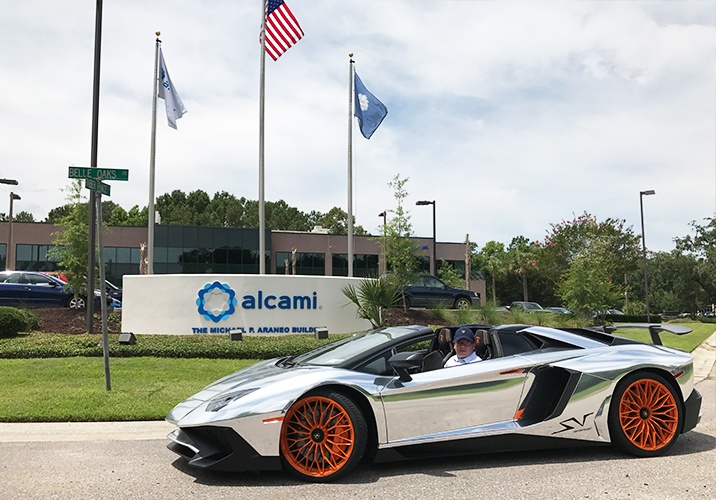 No other company encountered on the Road to BIO truly works from discovery through commercialization with the exception of Alcami. Natasha Howard, site director of the organization’s Charleston facility, is responsible for the operational activities of the parenteral arm of Alcami, which, for a company that established a facility specifically to house these capabilities, is a big job. But Natasha, sharp and poised, was generous enough to take the time to share how Alcami’s integrated offering creates value for partners, lending a much-needed perspective to the Road to BIO.

Headquartered not too far off the Road to BIO in Wilmington, North Carolina, Alcami is a global CDMO offering development and manufacturing services from seven sites across the globe. Its integrated approach enables each facility to leverage the capabilities of one another to create a less fragmented and, in many cases, faster pathway for products.

“At Alcami, our systems are incredibly integrated,” said Natasha. “This helps with the timelines associated with batch release. Our Germantown site, for instance, can make the API, ship it to us or our colleagues in Wilmington, and then we make the actual drug product. Because we’re all connected and speaking with one another, it makes the process much faster.”

Alcami is continuously investing in both facilities and people, recently putting over $5 million into the Charleston facility. These investments facilitate the organization’s commitment to remaining forward-looking with regard to new innovations tied to industry trends.

Before the team could leave the grounds of Alcami’s impressive parenteral manufacturing facility, the Road to BIO’s resident director, cameraman and pilot, Brian Pierce, broke out the drone for an aerial photo shoot. As the drone reached sufficient altitude from which to capture the building and its surrounding landscape, another aircraft was descending on Charleston with what would be a crucial component to the remainder of the journey—That’s Nice Market Research Manager and Road to BIO Scientist, Govindra Singh. Wide-eyed, well-rested and well-groomed, Govindra descended on what at that point probably looked like a pretty motley crew. 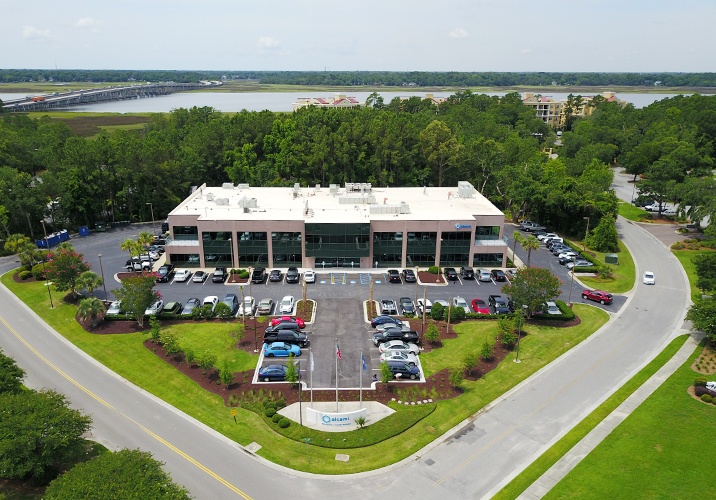 “I wasn’t really sure what to think,” said Govindra of his new surroundings. “I thought, ‘just roll with the punches…just go with the flow.’”

With the professional obligations of the day behind them and a new presence to enhance the dynamic, the Road to BIO took Chucktown by storm, taking every opportunity to juxtapose an artifact conceivably from the future with those of generations past. After a look across the river at Fort Sumter, site of two pivotal Civil War Battles, Nigel unabashedly pulled up in front of Charleston’s famous Rainbow Row where dozens were vying for photos of the cluster of color Georgian houses. Brian, a bit more sensitive to the wishes of the sightseers, cringed at Nigel’s faux pas before realizing all was in order. 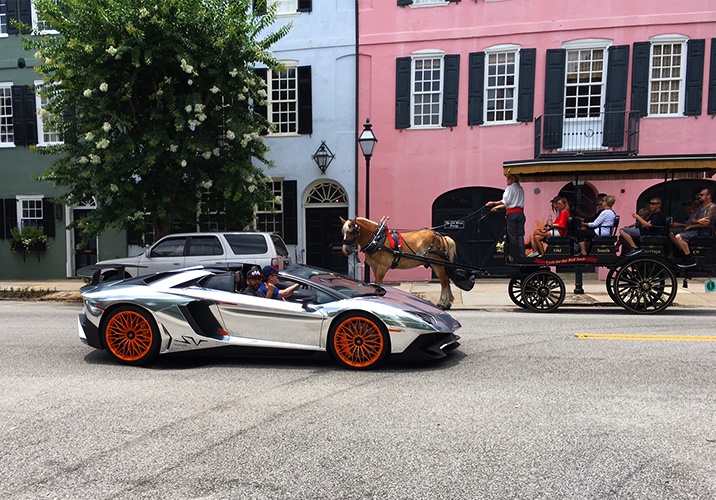 “I could imagine these people thinking, ‘I don’t care about your Lamborghini, I’m here to see Rainbow Row,’” recalled Brian with a laugh. “But I was misguided because no sooner did he lift the doors than everyone had their cameras on the Lamborghini, forgetting all about the landmark.” 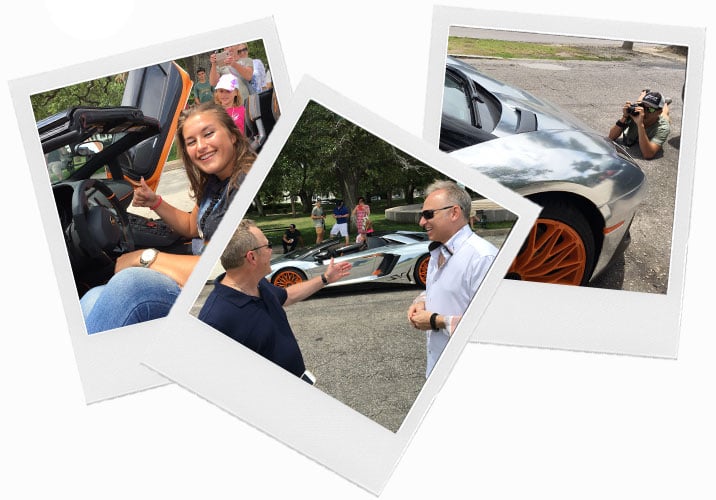 On the way out of Charleston, there were a few more exchanges with the locals, one of which was a schooling on the pronunciation of the city during a fuel stop. Nigel, with his British accent, had successfully removed the “r” from his diction, but there was a certain emphasis on the first syllable that he just wasn’t getting. 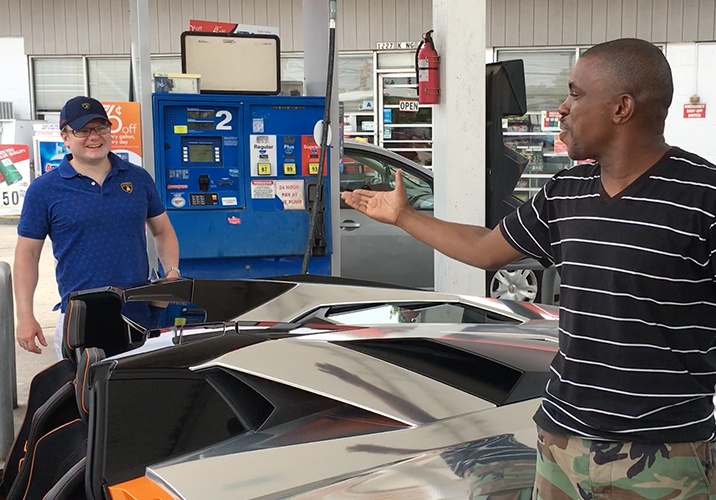 This went on for some time before one of the warriors indicated it was time to hit the road if they were to make it to their resting place of Atlanta, Georgia before midnight. Now in a bit of a hurry, Nigel led the crew out of the gas station toward the highway, only to get stuck behind a horse-drawn carriage moseying along, another amusing contrast in this historic town.

Five days into the Road to BIO and the crew had finally made their westward pivot toward their final destination of San Diego. But with the journey less than halfway complete, ample adventures and equal challenges still lay before them. Some would be significant—the air conditioning in the RV, it was discovered, could not be fixed, and so the crew was braced for a brutal seven days on the southern route to California. Others merely required a little restraint. After repeated warnings about Atlanta’s speed traps, Nigel needed to keep the accelerator in check, even when faced with another supercar on the four-lane Interstate 20. The fact that it was a Ferrari, he admitted, made it a little easier. 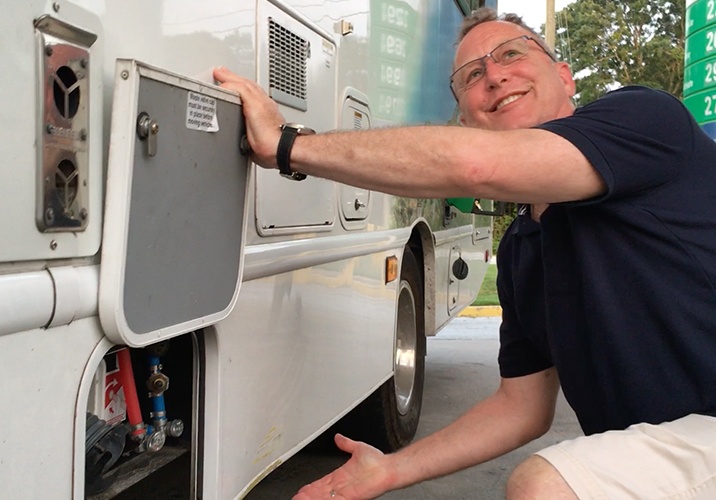 But it was Albert who got pulled over in the middle of the night somewhere in Georgia. Prepared for the worst, it turned out it was merely a lightbulb above the license plate that needed to be replaced. Everyone breathed a sigh of relief.

“Then Albert crashed the RV at a gas station,” cracked Nigel.

NEXT | Chapter 6: Rediscovering The Empire State (Of The South)