Rediscovering The Empire State (Of The South)

“The trip was hitting a high point. We were meeting new people, interacting with a wide range of local folk and enjoying every minute.”  Nigel Walker, Driver (Lamborghini)

When journalism and public relations converge, it’s typically a well-practiced tango between two parties who, despite their best claims to the contrary, are bound together by the mutual understanding that without one, the other can’t exist. Veteran journalist Steve Kuehn understands this dance well, as evidenced by his major “get” on the Road to BIO—Todd Sherer, the executive director of Emory University’s Office of Technology Transfer. Securing a perfect complement to the trip in terms of both profession and personality, Steve was “jazzed” to speak with Todd, whom he knew from his time at Siemens.

“Going into it, I was very excited to meet with Todd and to see not only how smart he was and how incredibly together he was as an executive manager, but that he was also a car guy and a motorcycle guy and a renaissance person,” said Steve. 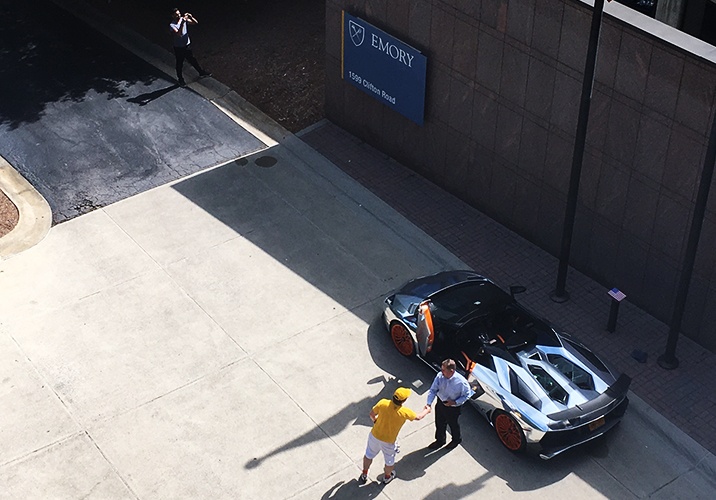 Emory’s Office of Technology Transfer is responsible for the intellectual property rights of the University, and oversees industry contracts for the hundreds of innovations received from its world-renowned faculty. Currently, the University houses over 1,200 technologies, many of which are driving innovation in the biopharmaceutical industry. Todd, who spends his days accelerating discovery through innovation, expressed slight disappointment when he realized the interview would not actually take place while accelerating through the streets of Atlanta in the Aventador.

Emory University is a leading research university internationally recognized for its liberal arts colleges, graduate and professional schools, and comprehensive health system. With over 28,000 employees, $574 million in sponsored research awards and 1,200 technologies, the institution plays a major role in driving innovation across the biopharmaceutical industry.

“As part of our active technology scouting function, we meet with researchers and clinicians to help them identify innovative ideas, making sure they are disclosed to our office,” said Todd. “We have several proof-of-concept funds, which are crucial for early-stage technologies, as they help us advance those technologies to a point where they are patentable and licensable.”

Best known for their success in the HIV drug space with the discovery of the nucleoside reverse transcriptase inhibitor, emtricitabine, currently licensed to Gilead Sciences, Emory University has discovered a multitude of therapies to treat a range of diseases.

“It’s hard to get past the impact our success in the HIV drug space has had on society, but we are also incredibly proud of numerous other innovations, ranging from recently-approved imaging technology that detects recurrent prostate cancer, to a device to deliver magnetic stimulation to treat depression, to a portable telescoping mosquito catcher that was sold at cost all over the world to help monitor the spread of insects and disease,” said Todd.

While Brian, Steve and Eugene took care of business with Todd, Nigel assumed his position as showman, presenting the Road to BIO and the vehicle behind the effort to Emory’s staff. Catching wind of Todd’s proclivity for speed, Nigel made sure he was promptly outside the building once the interview was over to take Todd for a spin around the neighborhood. But as Nigel “dropped the hammer” pulling out of the University, he caught a stomach-dropping glimpse in the rearview mirror—a police car pulling out behind him. Hitting the brakes and maintaining a modest 30 miles per hour as the cop tailed him for the duration of the joy ride, he managed to dodge a run-in this time, though he would not get out of A-Town completely scot-free.

Approximately six miles southwest of Emory in Atlanta was the CNN world headquarters, an opportunity the Road to BIO newsies simply could not resist. Strangely, Steve, the crew’s main correspondent, was missing in action on this most important stop-off, apparently lending his charisma to the 200-plus Rotarians attending the Rotary International Convention over at the nearby Omni Hotel. 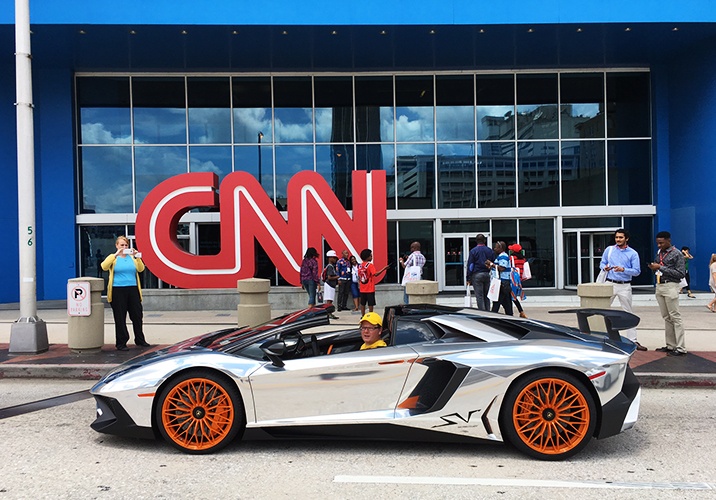 It was as Nigel waited in front of the building in the Lamborghini—unknowingly straddling a double yellow line—that he encountered what he was sure was his first real run-in with the law on the Road to BIO. But as an officer of the Atlanta Police Department approached, the crew, it seemed, was stifling giggles.

“Little did I know the officer had been asked by Brian and Govindra to move me along,” said Nigel. “A few minutes into the conversation, she got into the passenger seat and we talked about the Atlanta Police, and how much she loved the job.”

What Brian and Govindra intended as a prank turned out to be yet another one of the enriching interactions that comprised the spirit of the journey. After a bit of a goof including a mock arrest and several amusing photo ops, the crew bid farewell to their newest contributor on the Road to BIO, and to the Peach State. Due west by way of Alabama, Mississippi and Louisiana, the crew knew little of what they were in for, but one thing they did know was that barbeque was in their future.

Conveniently, Leeds, Alabama, the next stopping point on the Road to BIO, was home to two things of particular interest to a group of motor and food enthusiasts—the Barber Vintage Motorsports Museum at the Barber Motorsports Park, and the award-winning Rusty’s Bar-B-Q. Traffic surrounding the museum was fairly quiet on a Tuesday afternoon, but Brian couldn’t leave it at that, drawing the attention of two security guards as he climbed on top of the RV in the parking lot. Nigel quickly mediated the situation, offering passes all around to the largest motorcycle museum in the US where Brian Pierce found himself alongside a 1913 Pierce Four, the first four-cylinder motorcycle produced in the US. 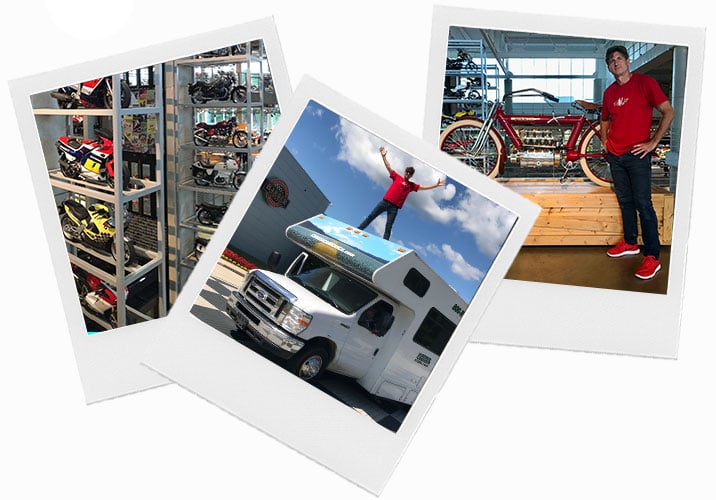 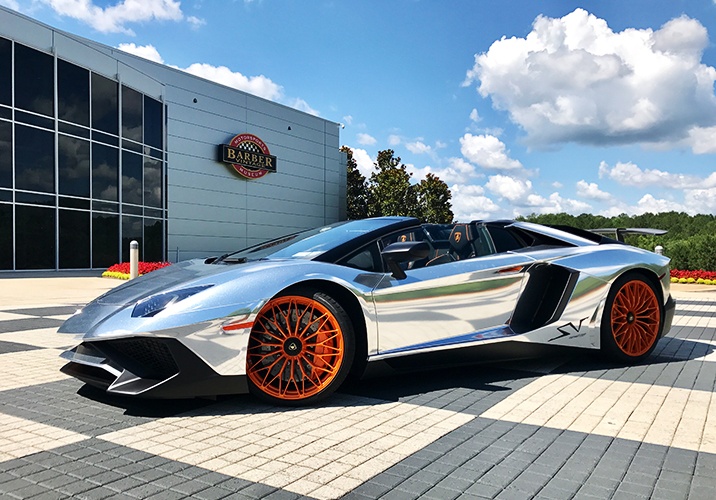 Trading wisecracks had become something of a rite of passage on the Road to BIO, with those flying under the radar of whose expense they were at earning extra points. Sitting at Rusty’s Bar-B-Q over a wealth of slow-smoked meats, Brian shared one of these very incidents, which, unbeknownst to Nigel or the group, had occurred just hours earlier. Brian had been taking some footage of Nigel outside of CNN, which ended with Nigel speeding away from the building. As had become a typical occurrence, Nigel’s rubber-burning departure in his glitter-wrapped Aventador had sparked some questions about the identity of this character.

“I had to laugh because, of course, it was Nigel,” said Brian. “But I told them it was Nigella Trump, Donald Trump’s daughter that they keep under the radar but who runs the whole operation.”

Everyone laughed, though it remains unclear whether Brian’s quip was just that funny or whether delirium had begun to impact the lucidity of the table, as a long-famished crew found themselves quite literally submerged in a sea of barbeque sauce, mac `n cheese and the best ribs Steve Kuehn claims to have had in his life. 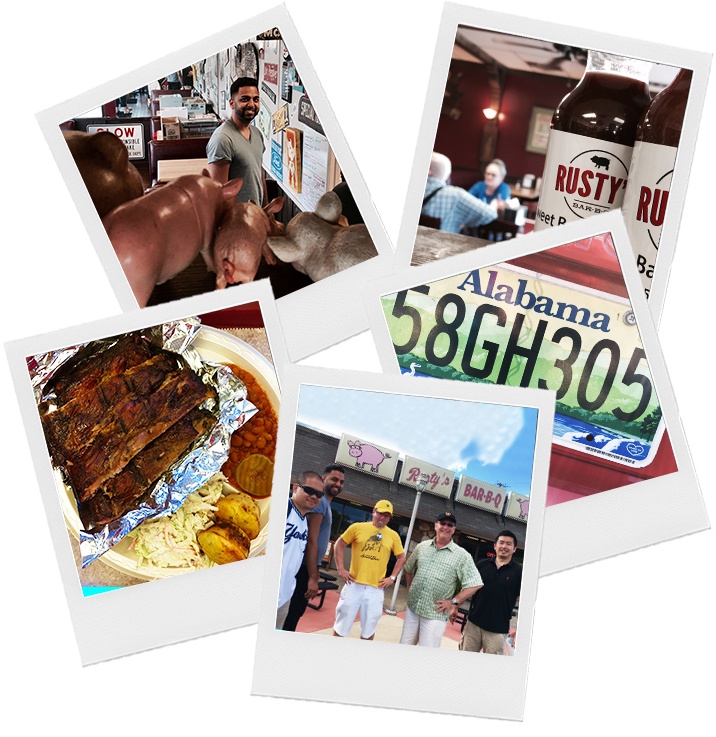 Full-bellied and heavy-eyed, the crew made a late-day push to Jackson, Mississippi, where they would hang their hats that evening. But crossing the city line, they were greeted with a welcome that was less than warm, and downright ominous.

NEXT | Chapter 7: Hit The Road, Jackson